Reliving the Summer of 1990 - Week Eleven

Talkin’ famous with the cowboys of “Young Guns II” and hitting the sweetest notes of the “Mo’ Better Blues.”

Nutshell: An elderly man comes out of the desert claiming to be William H. Bonney, a.k.a. Billy the Kid. Telling a lawyer his story, the tale brings us back to Billy’s heyday riding around with Pat Garrett (William Petersen), causing trouble that feeds into his legendary outlaw status. When the law wants Billy prosecuted for his crimes, Garret is urged to change sides, soon tracking Billy as a sheriff. Joined by his old Regulator partners, Doc (Kiefer Sutherland) and Chavez (Lou Diamond Phillips), Billy takes the gang down toward Mexico, soon grasping the wreckage of his dangerous life.

1990: I’m hard-pressed to fully recall why I flipped madly for “Young Guns II” back in the day, but the Brichives informs me I was gaga, goo-goo for the sequel, and I have to trust the passion of my younger self, even if I can’t quite pinpoint the impetus for the enthusiasm anymore. Enjoyment, sure, but it appears I was cartwheeling in 1990, fully in love with this unlikely sequel. 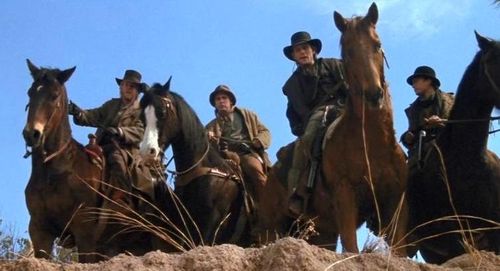 I suppose outrageous fandom isn’t such a stretch, since I enjoyed the original “Young Guns” two year earlier, smitten with a dusty, spittle-splashed Old West tale intended to butch up a few members of the Brat Pack, bringing the elderly genre to a whole new audience unaware of six-shooter delights. “Young Guns” was R-rated and forbidden, boosting its appeal, but the producers of “Young Guns II” brought the sequel to the junior high lunchroom discussion circuit, dialing down the bloodthirsty antics to a PG-13 rating, while hiring musician Jon Bon Jovi to provide a soundtrack, further enticing a younger audience. The mix was understandably appealing to me, permitting a chance to watch a “Young Guns” adventure without the burden of restricted access. 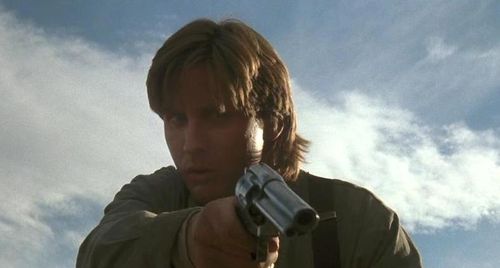 Taking its critical lumps as a cartoon version of the Billy the Kid story, “Young Guns” had trouble achieving legitimacy. Most dismissed the film as an unshowered trifle, playing with history to accommodate twerpy actors. The particulars didn’t manner to me much, as long as the action was feisty and the talent utilized well. The film didn’t disappoint, but it did contain a certain sense of finality, which is why the idea of a continuation was regarded as rather strange 20 years ago. How does one sequelize Billy the Kid when his death was a vital denouement to the first film?

“Young Guns II” took a mythical path to resuscitate the formula, a move I considered quite fascinating at the time. Under the guidance of an unreliable narrator, Billy the Kid was permitted to ride again, this time in something of a pursuit picture, which allowed for familiar faces from the original feature to meet up with a fresh band of outlaws, including Christian Slater as cocky gunslinger Arkansas Dave Rudabaugh. Slater was the hip young thing in 1990, making his inclusion here pretty damn cool, bringing a little taste of the now to the sequel. I certainly appreciated his presence. 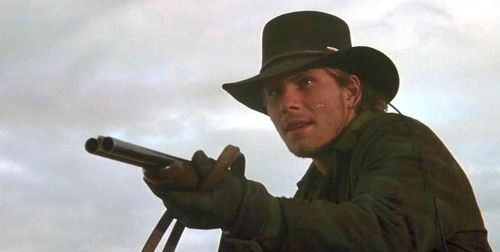 A Wild West story chock full of revenge, escapes, stunts, bad blood, and a Bon Jovi closer, “Young Guns II” blew my hair back at the time, constructing a more epic path for the characters and their hastily renewed troubles.

2010: “Young Guns II” didn’t slap me around quite as forcibly as before, but I was relieved to find a feature that’s aged rather well, making it clear why a young teenager would find the film so enchanting. The original picture was a more thoughtfully arranged western, carefully strolling onto hallowed genre ground. The sequel doesn’t really care about feelings, only the windswept sensation of a compelling widescreen oater, mashing together a threadbare tale of tracking to bring the dead back to life.

The “old man with memories” framing device is a clever way to rework the “Young Guns” story, freeing up director Geoff Murphy (who would reteam with Estevez in the wonderfully absurd sci-fi thriller “Freejack”) to chase an open range tone of travel, boosted wonderfully by a richly themed score from Alan Silvestri, who extends his own percussive ideas on the genre’s majesty. Murphy directs cleanly, arranging the shoot-outs and Billy’s personal declarations of doubt with a solid rhythm, making the film feel urged instead of assigned.

It’s fun to watch Estevez and the gang in these roles, and the performances are convincing, despite a script that doesn’t know how to close matters without blatantly underlining the contractual obligation nature of the finale -- a parade of death that guaranteed few actors would return for a third installment. Still, while around, the cast brings a nice urgency to the proceedings, and the addition of Petersen as Garrett renews the conflict, bringing in an accomplished, concentrated actor to ground the pursuit while Estevez continues to explore Billy’s childish antics. Petersen’s splendid here, instilling the film with breathable display of treachery.

In fact, the film’s filled with vivid performances from a cast of legends (James Coburn) and recognizable actors (Alan Ruck, Viggo Mortensen, Bradley Whitford, and an embryonic Balthazar Getty), and even a face I shouldn’t recognize…

“Young Guns II” has a sharp pace and distinct western flavor, making it more enchanting than breathtaking. I understand why I was so smitten with the picture back in 1990, and while the film still plays smoothly and entertains wholeheartedly, it’s not quite the brain-buster I was expecting. The blaze of glory has died down some. Maturity has a way of ruining such primitive excitement.

Nutshell: Bleek Gilliam (Denzel Washington) is an ace jazz trumpeter with his own quintet, trying to maintain his musical solace while juggling two lovers (Cynda Williams and Joie Lee). With his manager, Giant (Spike Lee), losing his shirt and the use of a few limbs to his gambling addiction, Bleek faces a greater foe when band member Shadow (Wesley Snipes) threatens to leave the group, hitting the frontman where it hurts by stealing one of his ladies. Facing financial ruin and romantic catastrophe, Bleek retreats to the swirl of his mind, where his beloved music reigns. 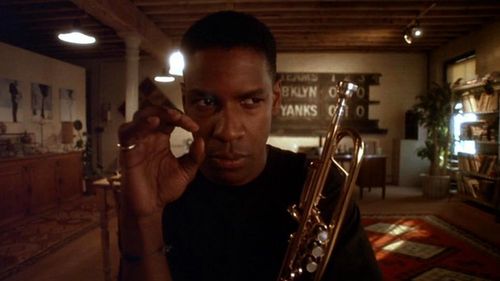 1990: In last year’s Summer of 1989 Diary, I wrote about the sheer cinematic and moral force of Spike Lee’s masterpiece, “Do the Right Thing.” The picture hooked me on Lee for the next decade, but a true test of that explosive newfound fandom would emerge immediately, with the release of “Mo’ Better Blues” one year later. That Lee sure motored quickly when he wanted to.

My first gulp of Lee’s screen brew came with a feature that took on racial unrest, violence, and unbearable summertime heat. “Mo’ Better Blues” was a detached love story set in the world of jazz. Talk about a come down. It was one thing to be a pipsqueak Caucasian teen inside a screening of “Do the Right Thing,” but a pipsqueak Caucasian teen inside a screening of “Mo’ Better Blues?” I’m sure the rest of the audience probably thought my friend and I were hopelessly lost, searching for the house running “Problem Child.” 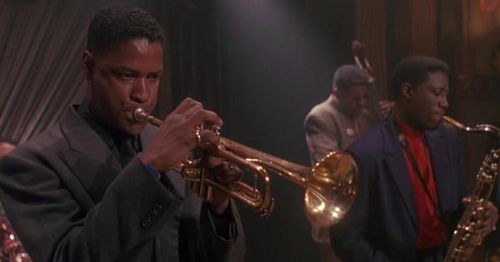 I described the film in the Brichives as “Slow, but intelligent,” which I believe is code for “What’s happening here, Mommy?” Not that the film was completely impenetrable, but I certainly couldn’t relate to the sexual dilemma or musical culture of the picture, only the power of the performances and Lee’s visual skill. Back then, I responded excitedly to expressive camerawork (still do), craving that fine line between wank and artful. Lee loved a good visual kick, always keeping his pictures in a state of shock, using the frame as a supporting character, reflecting moods with movement and angles. Gawd, I loved when Lee would futz around with his film school training, and “Mo’ Better Blues” was an appetizing film at the time because of this unsettled cinematographic quality.

Show me complex trials of love in a missionary position, smooth jazz, and clinky nightclub life, and I’ll give you utter bewilderment. Show me a fluid, bonkers crane move, and I’ll be there with pom-pons, cheering the director on. 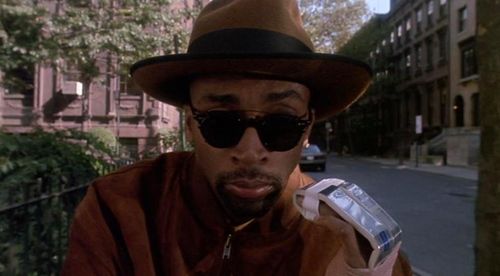 2010: “Mo’ Better Blues” is a much easier film to value today, standing proud as one of Lee’s most defiantly unsettled pictures, wandering around snatching bits of character and mood to compliment the warm expression of jazz onscreen. My appreciation of the musical art form hasn’t developed much over the years, but a specific cinematic intent from Lee to mirror the improvisational methods of the genre is thrilling to watch, especially when the filmmaker works up a sweat trying to mold a sensual core to the proceedings. 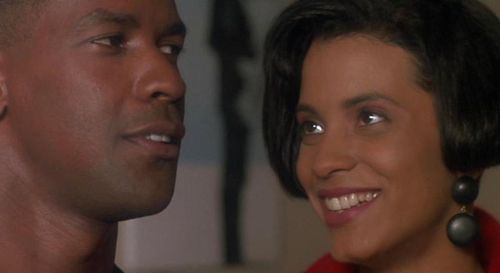 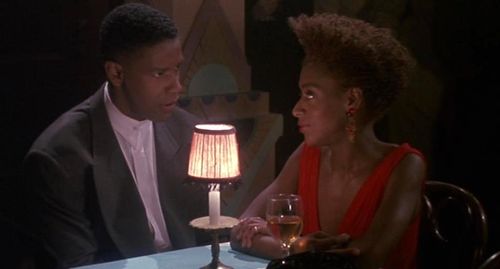 It’s a rambling feature at times, with perhaps 30 minutes of actual story blended into a two-hour production, but Lee doesn’t appear to be compelled by dramatics this time around -- there’s only the issue of Bleek and his life in service of the music, with women a gratifying distraction. This portrait of an artist is eloquently articulated through Lee’s gonzo camerawork and Washington’s uncharacteristically subtle performance, portraying a man caught up so deeply inside his own mind, he’s allowed his inner circle to lose faith. Again, plotting is minimal, which is probably why I tuned out to a certain degree in 1990. I found myself rather taken by the film’s shapeless appearance during this fresh viewing, achieving a stronger understanding of Lee’s objective, if not always his characterization.

“Mo’ Better Blues” is a pure Lee effort, with stupendous NYC and nightclub cinematography, an approachable soundtrack of jazz greats, and an entirely intriguing final act, which rushes through Bleek’s maturation in a funky montage scored to the screwball sounds of “A Love Supreme.“ It’s a burning, feeling film of impulses, bringing out the best in the filmmaker, who used to create miniature moviegoing events with his releases, before “He Got Game” came along and smothered his good taste. 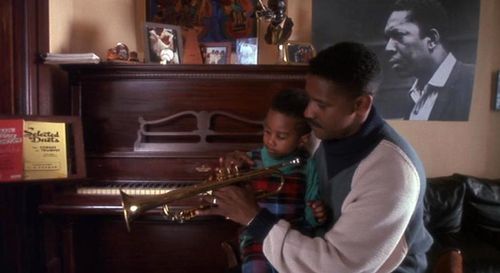 The feeling I had while watching “Mo’ Better Blues” was one of unexpected sadness and nostalgia, recalling a time when Lee dedicated his heart and soul to challenging, fiery, darkly comic jewels, taking his audience on a ride of distinct artistic personality. Those days are over for Lee, which is why “Mo’ Better Blues” is painful to watch. He’s a bitter man today, lacking the imagination and storytelling skills that were once so effortless. I would love to reclaim the purity of those early Lee moviegoing experiences.

And Robin Harris too. Bring that lunatic back and the world would be a brighter place. 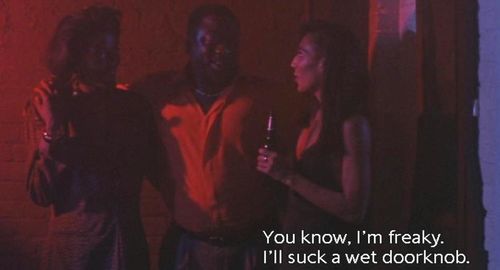 Sutherland, Roberts, and Schumacher cross over to the other side while maintaining perfect pouts. 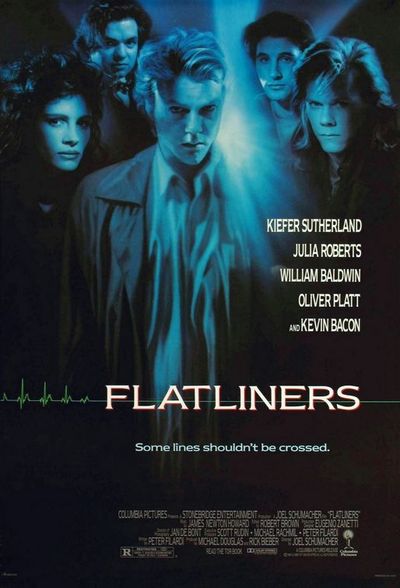 And Mel Gibson goes craz…yeah, I’m not touching that. 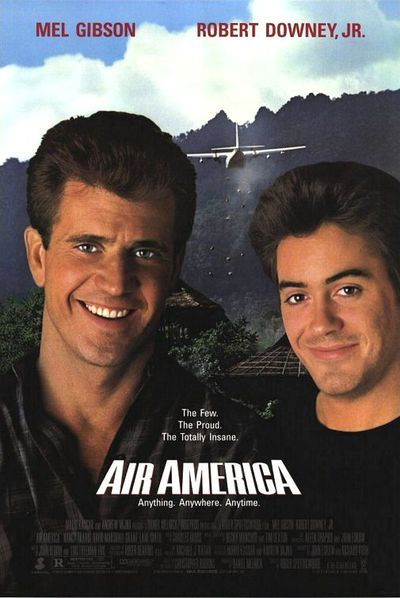 "Mo' Better" was actually my first Spike Lee Joint, and I've always thought it was a rather undervalued picture. Your 2010 thoughts pinpoint its virtues quite nicely.