Film Review - The Other Guys

Teaming up for their third picture, star Will Ferrell and writer/director Adam McKay have turned their attention to the conventions of the modern action movie. They’ve made a buddy cop picture, but in their own absurdist style (popularized in the hits “Anchorman,” “Step Brothers,” and “Talladega Nights”), shaping the explosive, bullet-happy mentality of a streetwise thriller into a raucous comedy, starring a guy known for reducing anything in front of him into utter ridiculousness and another guy who’s spent most of his career making unintentional comedies.

When a pair of supercops (Dwayne Johnson and Samuel L. Jackson) fall victim to their own airborne arrogance, responsible desk jockey Allen Gamble (Will Ferrell) and his hotheaded partner Terry Hoitz (Mark Wahlberg) must step up to the plate to keep the streets safe. Taking on a complex case of financial fraud, the cops look to a shady moneyman (Steve Coogan) for answers, only to a find a wall of bruisers (Ray Stevenson) and criminals out to block their questioning. Coming to grips with this impossible case, Terry and Allen grow to respect each other, dealing with past insecurities and office pranks while they try to maintain a sense of law enforcement composure. 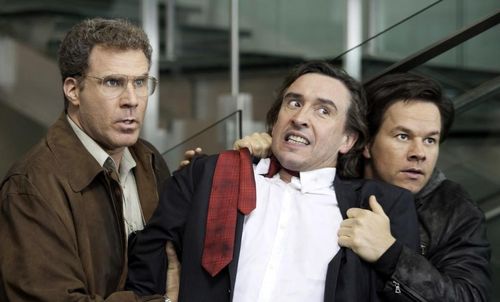 With McKay and Ferrell in command, there’s a certain expectation in place. These guys aren’t ready for any drastic artistic detours just yet, still stuck blissfully in the weirdo comedy realm, interested solely in generating waves of laughter. However, it appears there are two sides to the goofballery: the more polished pinch of “Talladega Nights” and the scattered joke shotgun of “Anchorman.” “The Other Guys” definitely registers on the “Anchorman” scale of monkey business, with the production throwing anything against the wall to see what sticks.

From the opening titles, it’s clear that McKay has done his homework figuring out ways to pants the traditions of the genre, which typically encourage raging car chases, thunderous shootouts, and macho banter. “The Other Guys” turns up the volume on the inanity, staging action beats with an eye toward overkill to sufficiently extract the intended satire and work in a little of its own lunacy, arranging a complex plot of deception for Terry and Allen as they shred New York City and, more often, their dignity.

“The Other Guys” is a big silly creation with a lot of pep, but lacks considerably in the focus department. The grab bag style of jesting works wonders for the opening hour, with our heroes coming to grips with their police responsibilities and combustible communication skills. Once the pairing is solidified, McKay drags the movie out longer than it needs to be, winding the picture in stunts and exposition to such a degree, the film becomes exactly what it’s satirizing. There’s a wheezy mood to the feature that hinders its bellylaugh count, leading to a comedic desperation that results in a patchwork quilt of a movie, with jokes and jabs stitched together haphazardly. 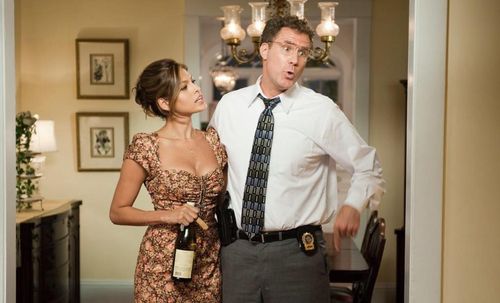 The madness is well executed by the cast, with Ferrell and Wahlberg making for a marvelous comedic duo. Ferrell’s lounging around his customary weirdness and decibel level, but that’s always good for a few giggles, especially as such a gullible character. Better is Wahlberg, who slips into the straight man role with shocking ease, making a wonderful neurotic wall for McKay to bounce craziness off of. The boys carry the picture superbly, backed by a solid support effort, including Michael Keaton as an exhausted, TLC-quoting police captain (and part-time Bed Bath & Beyond manager) and Eva Mendes as Allen’s gorgeous wife -- a fact he pays little attention to, while Terry can’t stop staring. Of course, McKay’s casting eye isn’t perfect, with Damon Wayans Jr. and Rob Riggle receiving yawns and eye-rolls as blowhard precinct rivals, straining hard to steal scenes, but always coming up short.

“The Other Guys” is happily boisterous and always ready to entertain, but the effect wears off eventually, a feeling accelerated the more McKay reaches randomly to provide filler (Allen recalling his days as a college pimp named Gator is a DOA subplot emblematic of the scattered direction). Covering the action basics the Michael Bays of the industry have turned into dreary formula, “The Other Guys” has enough on its plate to sustain the jokes and noogies, offering plenty of laughs, but little panache in the editorial department. 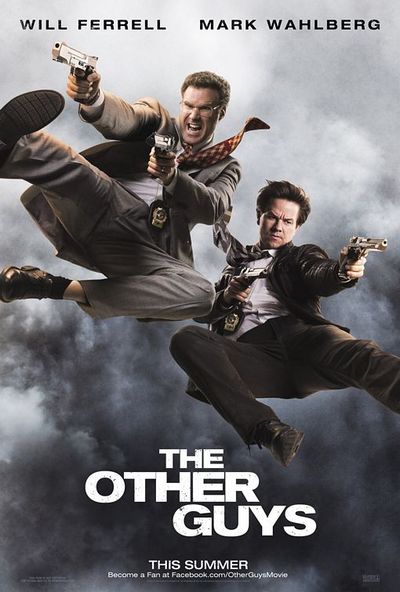