Led by Barney Ross (Sylvester Stallone), The Expendables are an elite group of mercenaries mulling over an offer from the shadowy Church (Bruce Willis) to head down to an isolated South American country and overthrow its dictator, who’s currently struggling with a rogue C.I.A operative, James Monroe (Eric Roberts). Inspired by a brave young woman (Giselle Itie) who’s chosen to stay and fight the evils of her homeland, The Expendables, including Lee Christmas (Jason Statham), Yin Yang (Jet Li), Toll Road (Randy Couture), and Hale Caesar (Terry Crews), suit up for battle, infiltrating the country armed to the teeth and ready to take down whatever stands in their way, including Monroe’s henchman Paine (Steve Austin) and a former Expendable, nutcase Gunner (Dolph Lundgren).

“The Expendables” is bonkers. There’s really no other way to describe what Stallone has assembled here. It’s not a tribute to the action bonanzas of yesteryear, but a reawakening of hard-charging heroic principals and room-clearing offensive tactics. Perhaps not the most rounded, elegant example of cinematic achievement, “The Expendables” nevertheless realizes the precise tone it’s chasing, making it one of more accomplished directorial feats I’ve seen this year. Stallone set out to burn the multiplex to the ground with this one, and he provides an absolute knockout punch of a film. 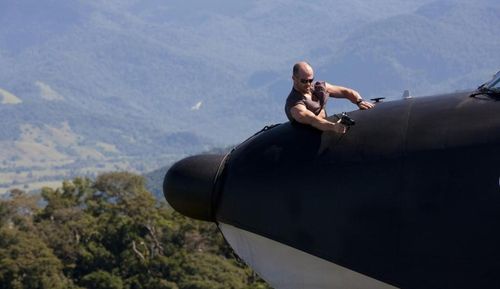 Of course, this grizzled, hobbling feature is not perfect. Stallone has a terrific sense of excess, but not always the best eye to convey the adrenaline rush. The cinematography is hopelessly reliant on shaky-cam to create a sensation of movement, turning sections of the film into abstract beat-downs, forgoing focus to center itself in a tornado of grunts and slashes. The screenplay also lacks a definitive wit to keep the banter awake, with much of the broheim interplay on the flaccid side, robbing “The Expendables” of memorable speeches and amusing exchanges. For a film about a bicep-bopping brotherhood, these guys don’t have much to say to one another.

A few small quibbles don’t weigh down the experience of “The Expendables,” which is a stunningly violent free-for-all, continuing Stallone’s interest in feral combat scenarios, as viewed in his stellar 2008 sequel, “Rambo.” As a filmmaker, Stallone shows interest in team dynamics and sweltering locations, bringing a faint sense of story to the picture, though one of unfortunate silliness when all is said and done. At least there’s an attempt to ground the film in themes of courage and combat guilt (Mickey Rourke enjoys a few weird scenes as an ex-Expendable tattoo artist carrying around agonizing memories) before it becomes a theme park stunt show, with Stallone feeling around his script for scenes of confession and vulnerability (Christmas and his female troubles is as close to a “Sex and the City” moment as this film gets). It’s a scattered piece of screenwriting, but it holds more ambition than anyone could’ve expected, finding the filmmaker endlessly curious about these brawny men and their craving for conflict. 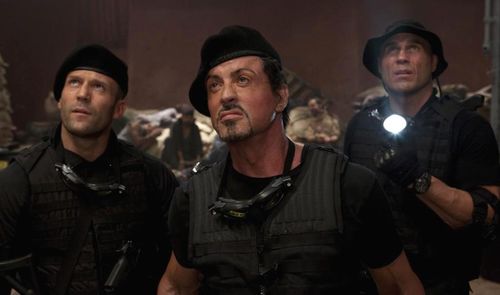 Blessed with a few amazing shootouts and some crunchy fisticuffs (offered a sense of humor, best sold by Jet Li and his amusing insecurities about size), “The Expendables” saves the big boom for the grand finale, where the boys storm a government compound, reducing everything to rubble and corpses. It’s not enough for Stallone to stage some exceptional fight scenes and rain bullets everywhere, but these guys even throw bombs around. That’s how tough The Expendables are. It’s a rowdy, obscenely violent conclusion to the film, but Stallone never pushes the extreme events into camp. Instead, he encourages a pure bath of brutality, sans winks. It’s up to the viewer to decide if this is all disgusting overkill or the cinematic equivalent of a firm erection.

While rough around the edges, “The Expendables” is a gas, creating a marvelous swirl of visceral entertainment that truly delivers the basics of bruiser moviemaking. It’s one thing to appreciate a return to the glory days of action blockbusters, but it’s a treat to watch Stallone figure out a fresh way to deafen a new generation unaccustomed to such free-flowing testosterone. 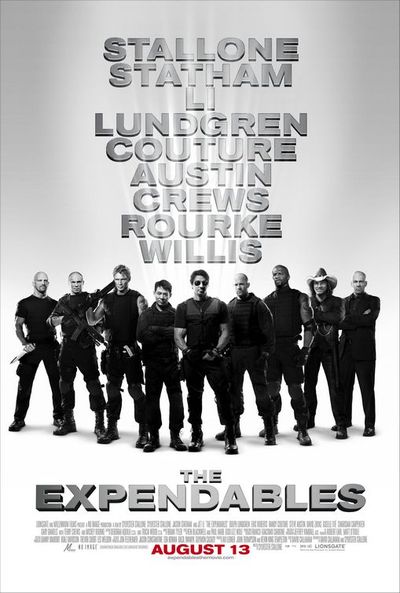