Released around the world in 2006/2007, Studio Ghibli’s “Tales from Earthsea” finally makes an appearance on U.S. shores, after some contractual mumbo jumbo with the SyFy Channel kept the picture in a state of limbo for an extended amount of time. Given a polish with an English-language voice cast and branded with a controversial PG-13 rating (a first for a Disney animated release), “Earthsea” is an impressive motion picture, but perhaps not worth the incredible wait it took to reach the West.

Dark times are approaching the land of Earthsea, with the “balance” of life eroding, allowing evil to take over the land, dividing the nations of man and dragon. Wizard Sparrowhawk (Timothy Dalton) has found a particularly troubled boy named Arren (Matt Levin) along his journeys, and brings him to a safe haven: home to Tenar (Mariska Hargitay) and young Therru (Blaire Restaneo). Forming a makeshift family, the clan is threatened by the wicked sorcerer Lord Cob (Willem Dafoe), who seeks the mystery of Arren’s true name, giving him almighty power to take Earthsea for himself.

An adaptation of the popular “Earthsea” novels by Ursula K. Le Guin, this Japanese production has the benefit of the animated realm, allowing director Goro Miyazaki (son of legendary filmmaker Hayao Miyazaki) to move fluidly around this fantasy world of dragons, magic, and malevolence. It’s a respectful directorial accomplishment, but not as confident a touch as the material needs, with viewers plunged into this convoluted universe with little to cling to besides colorful visual heft.

Perhaps students of Le Guin’s work will find more to feast on here. The script isn’t entirely impenetrable, but it does speak “Earthsea” fluently, submitting an overwhelming land of impossibility tied together through the balance of life and death. It’s a spiritual quest for our heroes, but also one of magic and guilt, driving a mystical core to the picture that takes some time to get used to. It’s not a thrilling film by any means, but perhaps that’s where the splendid integrity of it all lies, keeping the experience challenging to the layman. Still, there are plenty of question marks to the material that aren’t exactly ironed out by film’s end, along with a few flights of bodily transformation fancy that could use a more approachable degree of explanation.

An adventure story at heart, “Tales from Earthsea” retains a worthy epic stance, permitting a harder edge to the magical routine, thus keeping the stakes interesting. Perhaps a step down for the Studio Ghibli filmography in terms of elegance and overall abstract pleasures, the feature remains an intermittently beguiling creation. Just don’t hold your breath for direct clarity. 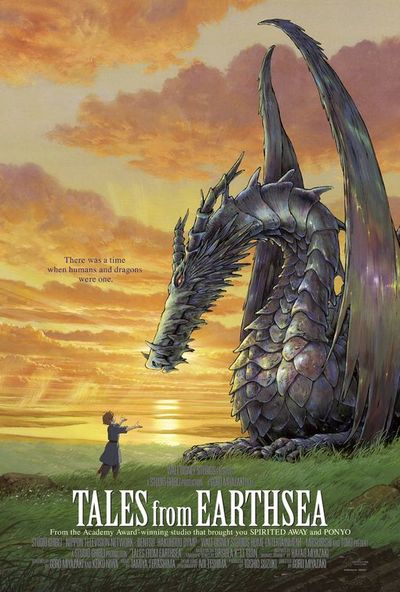