As junk food cinema goes, “Takers” has a few highlights worth viewing, and a nice breezy pace for the first half of the picture. It’s a heist flick of shoddy craftsmanship, abysmal performances, and meaningless conviction, but the movie knows how to cook on occasion. If it didn’t take itself so seriously, perhaps there might’ve been something celebrate here. Instead, it’s a misfire with a few cracking action sequences, best viewed at home with a mute button safely within reach.

For bank robbers Gordon (Idris Elba), A.J. (Hayden Christensen), Jake (Michael Ealy), Jesse (Chris Brown), and John (Paul Walker), life is a series of criminal opportunities, feeding their extravagant lifestyles and enormous egos. Fresh out of prison is Ghost (T.I.), a fallen member of the gang who’s in possession of a special strategy to stick up a few armored trucks. Suspicious, but drawn to the loot, the boys learn to trust Ghost again, embarking on a scheme to take the coin and escape to a foreign land. On their heels is Jack Welles (Matt Dillon), a burnt-out cop inching closer to the gang’s master plan, bringing along his troubled partner, Eddie (Jay Hernandez), to help nail the group for a myriad of crimes. 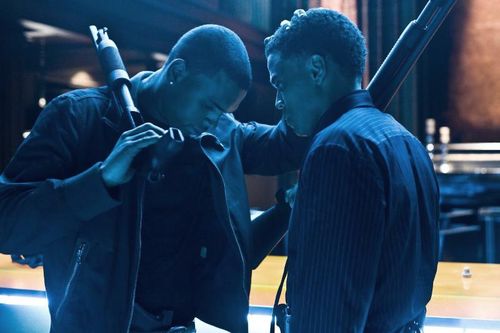 “Takers” is nonsense, but it’s efficient nonsense in the opening act. Establishing the group as a polished unit of extraordinary thievery, director John Lussenhop fires up the crime movie theatrics, hitting the audience with a full blast of the gang’s well-oiled efficiency (including a gift for stealing news helicopters) and camaraderie, keeping the bullets flying and the soundtrack thumping with tension. It’s simple stuff, but earnestly produced, establishing “Takers” as a glossy diversion, playing up the cool-cat factor of the men and their hooligan ways.

Unfortunately, the screenplay doesn’t stop with the clash of cop vs. crook, instead branching out to provide characterization to at least 30% of the cast. The diversions are sincere (Gordon has a crackhead sister he’s taking care of, Jack’s the distracted dad), but hardly provide the depth Lussenhop is hunting for. Hoping to manufacture a world of domestic concern and slow-boil streetwise apprehension, the film doesn’t create the feel of a unit; a few of the supporting actors offer nothing to the mix beside pouts and some questionable marquee value (for whatever reason, Zoe Saldana pops in for a few lines as Jake’s girlfriend). “Takers” isn’t a rounded crime story, it’s slapdash and uncomfortably random at times, dramatically limping between shootouts, using the violence to cover the shallow screenwriting. 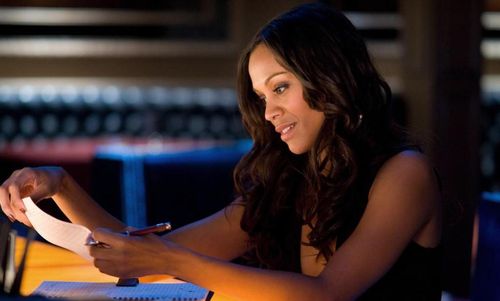 “Takers” is better on the run, including one dazzling Parkour-inspired encounter featuring Jesse, who blazes through the tight confines of several L.A. office complexes to evade the cops. The stuntwork is impressive, crashing all over the pavement, but Lussenhop doesn’t trust natural movement, preferring to cover the action with hideous shaky-cam visuals that boil down the brutality to a blur. Also of concern is the crummy HD cinematography, with much of “Takers” looking as though it was shot with a webcam held by someone with severe allergies. Visually, the picture is mess, going for a heavy stylized appearance without the proper tools or patience to see it to fruition.

The largest sin “Takers” commits is a sudden turn to tragedy in the final act, where feuds are sorted out, desperation is revealed, and lives are ended. Since we barely know most of these characters, it’s difficult to work up tears as they leave to meet their maker. In fact, considering the severe acting limitations found in this ensemble, I was more than ready to see a few of these monotone performers kick the bucket. Lussenhop treats the conclusion as a funeral dirge, stealing the climax of “True Romance” to tie together the fates of everyone involved in the armored truck heist. It’s ridiculous, but much of “Takers” is. However, I prefer a high-flying sense of ridiculous to buttress a truly ill-defined film, not the somber type that merely reinforces the emptiness of the moviegoing experience. 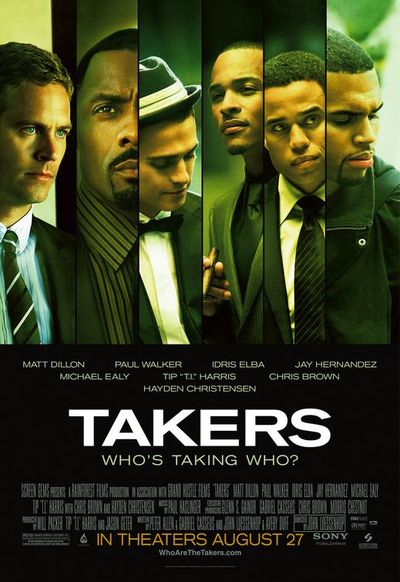 You probably should only review movies that are performed by well known actors and that don't have anything to do with rap in them. I think you are the one who needs the mute button if you don't like the music why did you even go to see it or do a review? It's not like you can be unbias when you went into the situation with certain dislikes or biases.

The review never singles out the rappers in the cast. And with Christensen and Walker in the film, I bet Brian was referring to them.