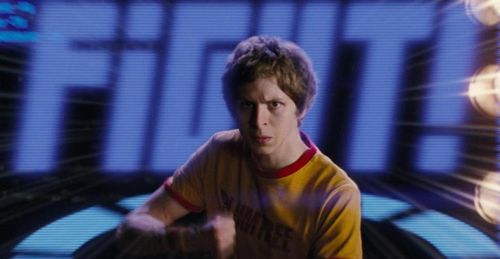 When director Edgar Wright decides to make a movie, it’s time to rejoice. After the inventive “Shaun of the Dead” and the whiplash “Hot Fuzz,” the filmmaker has earned his hotly anticipated status. Unfortunately, there’s a crushing disappointment to find his latest, “Scott Pilgrim vs. the World,” lacking Wright’s deft comedic timing and rounded characterization. It’s an overstuffed miscarriage, spending 110 minutes skimming source material that was spread out over six very patient books. What’s the challenge here? What’s the point of taking something so incredibly dense and head-spinningly idiosyncratic and turning into a colorless highlight reel of cult references and high kicks? This whole endeavor seems like such a colossal waste of time and talent.

Living the slacker life in Toronto, Scott Pilgrim (Michael Cera) is passing the time with his underage girlfriend, Knives Chau (Ellen Wong), when the woman of his dreams, Ramona Flowers (Mary Elizabeth Winstead), comes rolling into his view. Out to make her his girlfriend, Scott charms the distant, mood-hair woman, and the two begin a hesitant courtship. However, before they have an opportunity to get to know each other, Scott is confronted with the wrath of the League of Ramona’s Evil Ex-Boyfriends -- seven rough individuals the timid boy wonder must defeat before he can win Ramona’s heart. Backed by his “Sex Bob-omb” band members (Allison Pill, Mark Webber, and Johnny Simmons), his gay roommate Wallace (Kieran Culkin), and his sister Stacy (Anna Kendrick), Scott powers up for the fights of his life, all for the chance to be Ramona’s one and only. 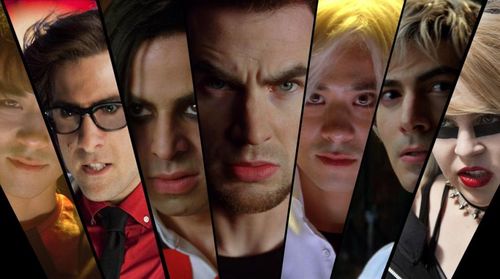 “Scott Pilgrim vs. the World” is a chaotic overview (not really an adaptation) of Bryan Lee O’Malley’s popular series of graphic novels (the sixth and final book was released last month), detailing the life and loves of one dynamic Canadian. It’s a tale of bohemian idolatry, aborted maturation, blazing video game-inspired battles, metaphysical leaps, friendship, longing, and endearing stupidity. Perhaps not the most cohesive narrative committed to paper, O’Malley’s passions nevertheless spiraled beyond the page to craft a whirlwind universe where anything that could happen often does, frosted with a wink and sprinkled with deadpan.

Wright’s film is a soulless representation of O’Malley’s work, smashing together Scott’s big adventure into one shallow depiction of everlasting love and gamer combat, reducing the nuance of the page into a zippy action film, carefully chiseling the personality off the material every step of the way. While only four books were in print when the production began to solidify, Wright insists the script (co-credited to Michael Bacall) take on the entire arc of Scott and Ramona’s story, squishing six evil ex encounters (one features twins) into a single film. That’s six personalities to properly gel before the action kicks in, not to mention a host of characters even O’Malley had trouble paying attention to. 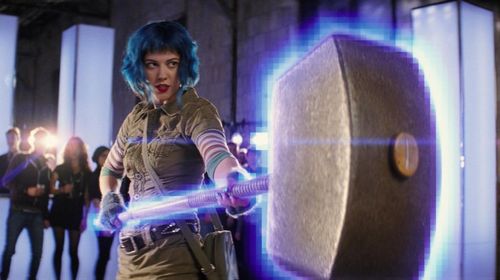 Perhaps a “Harry Potter” type of adaptation process was in order for “Scott Pilgrim,” with Wright taking on only a few books at a time. The way the picture stands now, there’s no depth to the characters, who are ushered in and out of the feature quickly to make way for the mayhem. There’s nothing emotionally substantial in the entire film, and we’re talkin’ love, people. Ramona and Scott interact more like curious first cousins than lovers, with little screen time offered to settle into their relationship. The same hurried feel greets the secondary characters, who are mere hygienically challenged caricatures instead of a supportive, combative, concerned community watching their friend chase a mysterious creature cursed with serious romantic issues. The meat is missing from the screenplay, which ignores the very charisma of the source material to mold something one-note and glossy from an incredible universe of puzzling events.

Wright’s technical ability is unparalleled, and “Pilgrim” supplies the expected visual fireworks. Nervously tinkering with his frame, the director certainly loves the superficial details of O’Malley’s kingdom, with special attention paid to the graphic novel movement accents and gaming treasures. He brings a righteous ferocity to the standoffs, employing snappy martial arts and clean visual effects to convey the meaningless nature of the encounters. Displeasure sinks in when it’s clear Wright is only after cinematic mimicry and overload to present “Pilgrim” to the masses, more convinced it’s a story of arcade war than comical, slightly distressing twentysomething stasis. Wright has a wonderful eye, but his vision is blurred here, leading with bedlam instead of saving those amazing moments for proper punchlines.

On the bright side, the supporting cast here is marvelous, flavoring up wafer-thin roles with superb comedic timing. Special attention must to be paid to Allison Pill, who makes a fiery impression as frosty drummer Kim despite having no discernable human characteristics (another causality in Wright’s 8-bit war zone). The Evil Exes are colorfully captured by a range of famous faces (including Brandon Routh, Chris Evans, and Jason Schwartzman as alpha ex Gideon), with Mae Whitman authoritative and funny as Ramona’s unhinged lesbian fling, Roxy Richter. Even the dreamgirl herself, Mary Elizabeth Winstead, has a few shining moments, molding a defiant, embarrassed personality out of limited screen time.

The real bugaboo in “Scott Pilgrim” is Scott Pilgrim, as Cera doesn’t play a specialized character with pages of behavioral nuance to pull from, but himself. Yet again. Cera’s stammering, one-liner routine is unforgivably stale, doing little to breathe life into Scott or the movie. Cera pulls off the action beats with gusto, but fumbles the sly chicanery of the character, turning Scott into a mentally challenged hero, lazily hitting feeble jokes instead of swimming around in the wondrous character dimensions provided by O’Malley.

“Scott Pilgrim vs. the World” provides a certain voltage, but not the epic concentration that would take the film to extraordinary heights of dramatic satisfaction. Instead, it’s a clip reel of console carnage, more tuned into surface delights than treating O’Malley’s material with the sincerity and breadth it deserves. 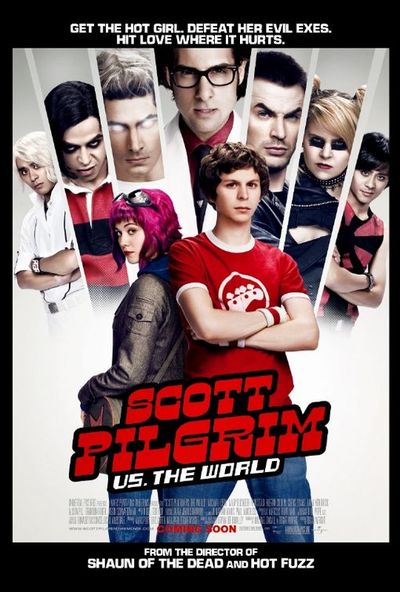 The movie is ten times better than the books with it's rushed 6th volume, you're crazy.

And you sound like you actually liked the movie...

I was hoping that Scott Pilgrim would have came across as Kung Fu Hustle meets Clerks 2, a movie with crazy fight scene's, but one that also touches upon the post-high school malaise and melancholy of trying to find your own way.

I adore series 1 of Spaced and thought that Wright would be the PERFECT person to adapt O'Malley's fantastic books (except for Vol. 6 which sucked) but, as I feared, Cera was horribly mis-cast and Wright has focused less on the characterization then the visual pyrotechnics.

To me, Scott Pilgrim is less about fighting evil Ex's then it is about a character growing up and putting away childish things. I think Wright missed that point entirely.

Sorry dawg, but there was no way to put the six-book story into a two-hour movie and not have it come out relatively smooshed. That's probably why the pacing is so unbelievably insane.

And if you believe Cera was just playing Cera again, you might want to go check out Arrested Development or Superbad... very different from Scott.

I have to say, I really like your review. I am pretty sure I will like the movie, but your review has to be the most honest of the negative reviews out there. Most people that aren't giving this movie high marks just come across as an angry old man in a robe, standing in his yard as he shakes his fist at kids biking by.

My biggest fear about this movie has been trying to get the whole story into a single movie. There is a lot of plot, a ton of characters and a lot of character development over those 6 books.

What amuses me most about reviews for this film is that there are very, very clearly two sides: (1) Family Guy/video game/pop culture dweebs who love it (people who like to sit around at IHOP quoting their favorite show and making references in front of other people to "impress" them) and (2) people who don't subscribe to the "gamer/geek" subculture who hate it (people who enjoy films as stories and art and not just callbacks to their favorite whatever). Yes, there will obviously be people in the middle who are indifferent to it or don't "get" it, but for the most part, that's how I'm calling it.

This. I loved the books, and you pretty much nailed why I couldn't love (despite trying really hard!) the movie. And Cera was totally the wrong person to cast as Scott.

Although I loved the movie, I can see where you're going with this review, even though we'll both have to agree to disagree about it.

Speaking of hipster media and the hipster people who read and write it, you would not believe the way the alternative Toronto media (NOW Magazine, Eye Weekly, and Exclaim) went all-out to cover Scott Pilgrim Vs. The World, simply because it was filmed in Toronto as Toronto (the Torontoist blog did two articles on the movie, both very gushing and full of praise; the first for making the movie in Toronto as Toronto, the second praising it as a hero of 2010.)