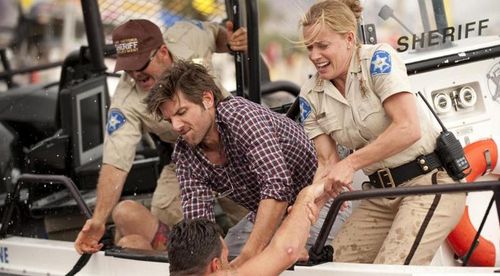 Produced by Roger Corman to capture “Jaws” fever while it still stupefied moviegoers, 1978’s “Piranha” was a lively little horror picture, handed sly comic overtones by director Joe Dante, who paid careful attention to the magic of low-budget pandemonium -- a fish feeding frenzy that left much to the viewer’s imagination. Now it’s 2010, and a few puppet fish just won’t do. Enter “Piranha 3D,” a comfortably budgeted sensorial assault that stretches out from the screen to bombard viewers with so much gore and violence, it makes a Gwar concert feel like a Jane Austen book club meeting. It’s a new age for the furious underwater munchers, and director Alexandre Aja is willing and able to turn what was once a charmingly low-fi distraction into a gonzo bloodbath.

It’s Spring Break week at Lake Victoria, which translates to a massive influx of college students, all ready to get drunk, get naked, and party the day away. Keeping the kids in line is Sheriff Julie Forester (a charmingly commanding Elisabeth Shue), who finds inconceivable trouble when an earthquake opens up the bottom of the lake, permitting prehistoric piranha an opportunity to feast on guests. With the lake in a panic, Sheriff Julie frantically defends her turf with the help of deputies (Ving Rhames) and specialists (Adam Scott), while her son, Jake (Steven R. McQueen), is stuck at sea with “Wild Wild Girls” pornographer, Derrick Jones (Jerry O’Connell), and his bevy of babes (including Kelly Brook and adult film star Riley Steele). 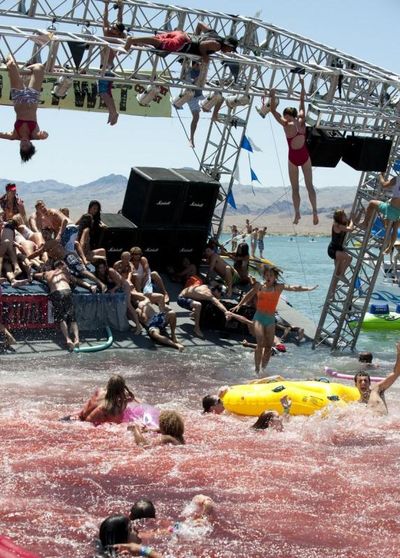 Much like the original picture, “Piranha 3D” isn’t on the prowl for screen legitimacy, yet the production effort here is amazing to behold. It’s a semi-campy horror picture that only really has three things on its mind: breasts, blood, and piranhas. Everything else just gets in the way. Aja (a gifted director who fumbled mightily with 2008’s “Mirrors”), returns to form with the feature, shaping a movie of exceptional spirit and gore zone moxie, using the upgrade in special effects and screen depth to fashion a pure roller coaster ride of chomps and giggles, taking matters as seriously as can be expected in a film with a nude lesbian underwater ballet and 3D barfing.

Aja plays “Piranha 3D” blessedly simple, and his focus comes in handy, submitting a straightforward thrill machine that sneaks in an itty-bitty amount of characterization, some vital environmental rules, and conjures a torrent of blood. The film is vicious, but necessarily so, cranking up the carnage as the piranhas attack the terrified students, furiously nibbling away at their soft flesh, leaving the filmmakers plenty of opportunity to exploit the grotesque 3D possibilities with this buffet of thrashing victims. While most of the mayhem is reserved for a huge third-act showdown between the piranha and the sheriff’s department, Aja maintains an encouraging threat throughout, getting the viewer used the view before he splashes blood all over it. 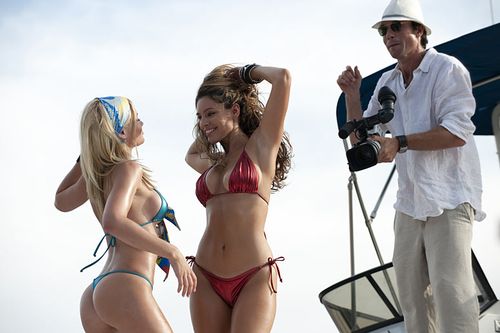 While never outright hilarious, “Piranha 3D” does retain a healthy sense of humor, encouraging Richard Dreyfuss to return to the water as his character from “Jaws,” and O’Connell is certainly living the dream as the coked-out smut peddler, stomping around the film in a frenzied state. The movie retains an operatic sense of skin as well, offering the 3D presentation a wide range of breasts, bottoms, and assorted titillation to assure its place as the most illegally downloaded feature film in junior high history. Aja knows exactly what he’s cooking up here, and that confidence is a joy to watch. It’s good-natured fun, not for every taste, but a specified, sun-soaked ride of debauchery, marvelously executed all around.

Shame on the Weinstein Brothers, who attempted to hide “Piranha 3D” from critical view before opening, fearing such immoral extremity would be met with a chorus of boos from the pipe-and-elbow patch crowd. When it’s constructed this sharply, sickeningly, and gleefully, utter havoc can be a delightful thing to behold. 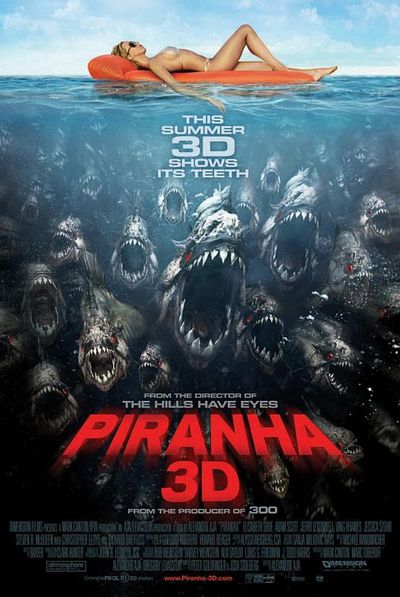 Nude lesbian underwater ballet and 3D barfing? I am SO in!!

Awesome review! I didn't actually think anything would make me want to see this movie :)