“Lebanon” is a war film of faces, not action. Here we find the ravages of combat communicated by the reaction of young men, soldiers facing their first true test on an ill-defined battlefield. They are caught inside of a sweltering tank, observing nightmares through scopes, participating in bloodshed out of duty, while they slowly succumb to the shock of war. Perhaps not the most effective dramatic statement, Samuel Moaz’s “Lebanon” remains a wholly unnerving depiction of battle zone madness.

Preparing for duty during the first Lebanon war, a group of soldiers inside of a tank have been ordered to clear through enemy territory, deploying illegal bombs when necessary. The men have little combat experience, strapped into an immense killing machine that demands their utmost concentration, yet the horrors they view along the way have unraveled their sense of duty. Enduring counterattacks, acting as a makeshift ambulance for the dead, and eventually taking a prisoner, the soldiers reach a breaking point, feeling the cruelty of the war starting to bleed into madness as they push on into the unknown.

Think of “Lebanon” as “Das Boot” inside of a tank, with Moaz marching into the belly of the steel beast, refusing the let audiences breathe for nearly 90 minutes of unfathomable screen claustrophobia. We are embedded with the soldiers, watching them bicker and worry, fighting an interior battle between instinct and military responsibility. It’s a chest-tightening experience of combat pressure, using the tank’s soiled, confined space as a way to flare up tempers and jittery indecision, maintaining the film’s unease throughout the entire running time, making the viewer feel as nauseous as the characters as the tank rolls into deadly territory.

The film’s most striking moments are found with the tank’s POV, which surveys a landscape of destruction and collateral damage, keeping the gunner in a state of shock as he witnesses the true price of war for the very first time. Technically unnerving (the whir of the gun turret is unsettling), “Lebanon” constructs a visceral visual exploration into the conflict at hand, refusing to turn away from graphic violence or powerful displays of anguish.

I was slightly less convinced with the personal stories and bickering among the crew, which falls into more traditional wartime histrionics. “Lebanon” delivers a more devastating blow by simply serving up troubling visual developments and allowing the characters to stew in the violence, summoning a powerful, sincere anti-war statement that makes for disturbing, essential cinema. 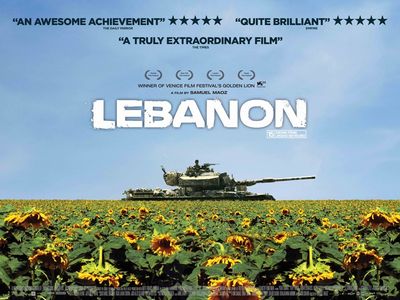