In 1969, The Who unleashed “Tommy,” their electrified stab at a rock opera after years of tinkering with the elusive format. A musical achievement of staggering ambition and crunchy stacked-amp rock theatrics, “Tommy” became a sensation, justifiably branded the defining album of the band’s extensive career, soon embarking on a marathon tour of interpretation, eventually making iconic leaps to Broadway in 1992 and a feature film in 1975, handed over to cinema’s most persistent imp, director Ken Russell. The official tagline for the picture stated simply, “Your senses will never be the same.” It was a promise well kept.

Receiving the news that her pilot husband was shot down behind enemy lines during WWII, Nora (Ann-Margret) fears she much soldier on as a single parent with her son, Tommy (played as an adult by Who singer Roger Daltry). Finding love again with holiday camp scamp Uncle Frank (Oliver Reed), Nora accepts the new man into her life, only to find her husband didn’t actually perish as believed. In a fit of rage, Uncle Frank kills the pilot in front of young Tommy, with the impressionable boy instructed to bury this horrible vision deep within. Electing to shut down all of his senses, Tommy, now “deaf, dumb, and blind,” lives a life of maddening psychosomatic blankness, with a series of professionals and hooligans taking their turn tormenting the boy, hoping to crack his baffling shell. Instead of medicine or violence, Tommy’s mind is electrified by the healing power of pinball, which makes him a world champion, and soon a flawed deity.

To write that “Tommy” is a strange movie is selling the wondrous amount of psychedelic folds and avant-garde chutzpah on display here frighteningly short. Russell isn’t preserving the rounded edges of the original recorded work, instead shredding it through his command of cinema, interpreting The Who’s  rock opera as a labyrinthine tour of the mind and soul, following Tommy’s life from a mute boy to a golden messiah. Richly rooted in era-appropriate synesthesia and barnstorming Euro filmmaking sensibilities, “Tommy” is contorted masterfully by Russell, who seems only moderately engaged in the music, instead expelling gale-force energy assembling this episodic descent into one abyssal, satiric, ear-ringing acid trip. 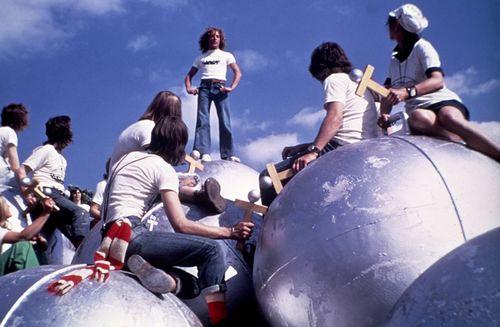 Thwacked by Russell’s abstract impulses, “Tommy” is a sensorial assault that perfectly captures the world of the album. Granted, the music’s been molested some to fit into its new home (personally, I prefer the stripped-down cut of the record, but there’s no better version of “Cousin Kevin” than Paul Nicholas’s nefarious performance here), with a generous push of synths to capture the 1970’s mood, but fixating on the sounds misses the point. Russell doesn’t want your ears, he wants your whole damn head, filling the frame with every camera and editorial trick in the book to create a swell of dementia as Tommy plunges deeper into his illness, while his world fights back with increasing frustration. “Tommy” is a head-spinning, backhand slap of a feature film, skillfully reaching out to the viewer with an array of songs, grotesqueries, perversions, and baked beans, guaranteeing the film an immediate reaction from anyone daring to sit in front of it.

Russell fires on all cylinders here, poking and prodding his cast to reach euphoric levels of expression. Reed is sufficiently agitated as Uncle Frank, and Daltry embodies all the childlike stillness of Tommy, generously articulating the character’s arc of pinball enlightenment. However, nothing comes close to Ann-Margret, who morphs into a ginger tornado as Nora, supplying a demented performance that needs to be seen to be believed. Able to deliver the tunes and the absolute mania the role requires, Ann-Margret received a much-deserved Academy Award nomination for the role, which miraculously straddles the fine line between mortifying and exhilarating. Famous supporting turns from Elton John (as the Pinball Champ, rocking size 140 shoes), Tina Turner (hyperventilating like a crazed cheetah as the Acid Queen), and Jack Nicholson (“singing” as The Specialist) help to beautify the feature, but the core essence of “Tommy” lies in the quivering carriage of Ann-Margret and her heroic personification of Russell’s funhouse directorial approach. 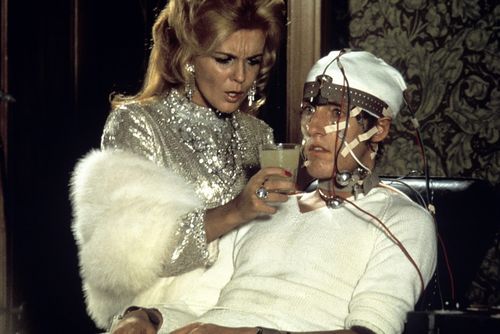 The AVC encoded image (1.85:1 aspect ratio) isn’t exactly a BD experience worth salivating over, instead merely enhancing texture to a respectful degree. Sweat appears to benefit the most from the upgrade, displaying a wet cast with awesomely detailed anxiety that DVD and LD releases never quite achieved. Skintones are natural, revealing interesting make-up work at times, but shadow detail suffers some, displaying clotted low-light environments, with little additional information preserved. The film’s colorful cinematography is brightened on the BD, with the opulent visual madness crisply sustained, allowing for many pauseable moments to study what Russell achieved. Red and yellows have a nice kick about them that awakens the proceedings. Print damage is minimal.

The 5.1 DTS-HD sound mix brings “Tommy” to life with a track that holds to a cinematic presentation without kicking into overdrive. The performances sound fresh and inviting, with clean separation on the instrumentation (inherent on the original recording) and frontal vocals, creating a circular feel that swings around the surrounds, with heady directional activity during choral selections and crowd environments. Breaks between the rock opera action sound thin, but purposeful, keeping to the picture’s original audio texture. Low-end is responsive, lending the more aggressive tunes a punch of bass that widens the musical mood. This track represents a more updated presentation of the movie, taking advantage of clarity without overkill. The 5.0 “Quintaphonic” mix reflects the film’s initial presentation, highlighting an intentional bluntness and crude directionality that engages a more nostalgic cinematic sound, coming off pleasingly thicker.

“Tommy” has been pulled through a myriad of interpretations, and while the songs and characterizations retain a familiarity, the artistic approaches vary wildly. It’s a testament to the dazzling musical foundation laid by The Who, but also to the story’s remarkable malleability and enduring relevance. Ken Russell’s “Tommy” is the most blitzkrieg version of the rock opera, steamrolling along without worry, trusting the blissful music, the toil of the ensemble, and the visual eruption will provide a magnificent vibration.

(Stills do not reflect final product)