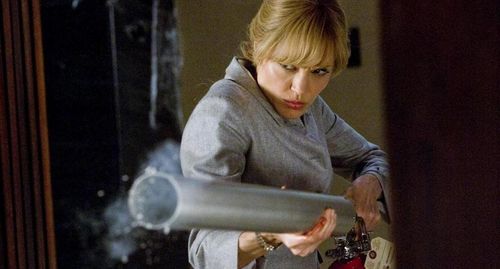 “Salt” is a tremendous load of action hooey, but unlike other action hooey, this action hooey has the sense to keep matters moving along at any cost. An adrenaline shot of international spy games, “Salt” convinces more with its sheer velocity than its enigmatic story, which is positively alien in matters of logic, physics, and hypnotic characterization. It’s a big, barreling popcorn adventure lugging around one element that helps to sustain its entertainment value and enhance its screen magnetism: Angelina Jolie.

A CIA operative with a loving husband and a peaceful life, Evelyn Salt (Angelina Jolie) is called into duty late one afternoon to deal with a boastful Russian defector. Calling out Salt as a covert Russian spy planted in America to take part in an uprising, the man triggers something within the woman that sends her on the run. Chased by her fellow agents (including Liev Schreiber and Chiwetel Ejiofor) throughout Washington D.C., Salt swiftly transforms into a sleek lethal weapon, capable of infiltrating any building and toppling any army. With a plan to assassinate the Russian President revealed, all eyes are on Salt, who suits up for an assault of indeterminate national loyalty, desperate to protect her clueless husband from harm. 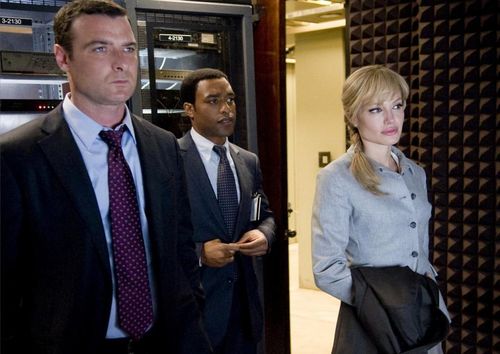 Marking his return to the genre that served him well in the 1990s, director Phillip Noyce takes command of “Salt.” Much like his work on the Jack Ryan adventures “Patriot Games” and “Clear and Present Danger,” Noyce again delves into matters of government espionage and betrayals, with special attention paid to paranoia. The difference here is the screenplay by Kurt Wimmer, noted craftsman of noisy malarkey (“Ultraviolet,” “Law Abiding Citizen”), who endows “Salt” with a baroque action mentality, unleashing the film in the early going, insisting it never let up until the end credits.

The snowballing attitude of Wimmer’s writing is satisfying, but the details here are entirely on the far-fetched side. This is not a film of logic, but of movement, doing whatever it can to keep Salt on the run. Noyce’s action beats are inspired, imagining Salt as a tennis ball bounced in every single direction, tossed around cars and buildings as she stomps her way through waves of government goons, dodging bullets in a James Bond fashion as her combat skills and methods of disguise are put to the test. Realism isn’t the point, only thrills, which might leave more unprepared moviegoers cross-eyed as Salt rockets through Washington with the type of danger-avoidance skills typically assigned to Bugs Bunny. While the hyper-cartoon nature of “Salt” is disappointing and a little obnoxious, the film preserves its appeal by rarely dwelling on the details. 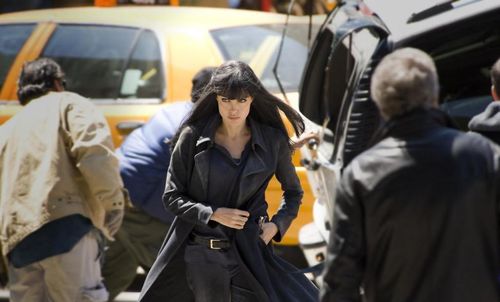 Is Salt a Russian spy? The picture provides a compelling depiction of the character’s predicament while coyly tinkering with her motivation, stretched out over the entire picture to keep the audience guessing. Jolie’s a sharp choice for the puzzling role, blessed with a physicality that makes her pass for a punch-happy, raven-haired action hero and a sympathetic soldier. Leaping around the frame, Jolie makes a fabulous impression. Without much of a dimensional character to work with, the actress turns Salt into a feral beast of a warrior, able to defend herself from any threat while maintaining perfectly glossed lips. “Salt” has a tendency to get lost in the mayhem, but Jolie does an excellent job keeping the picture alert and compelling.

“Salt” steamrolls right on through to the end, which sets up a sequel and possible franchise for the character in a crass manner. A second helping wouldn’t be the worst thing in the world, but for it to cook properly, a screenwriter with some appreciation for gravity would be a great place to start. “Salt” is an exciting picture, but it’s a hollow experience, spinning madly to hold attention, forgoing the intriguing weight of a contemplative thriller to make a commotion with a disarming action icon. 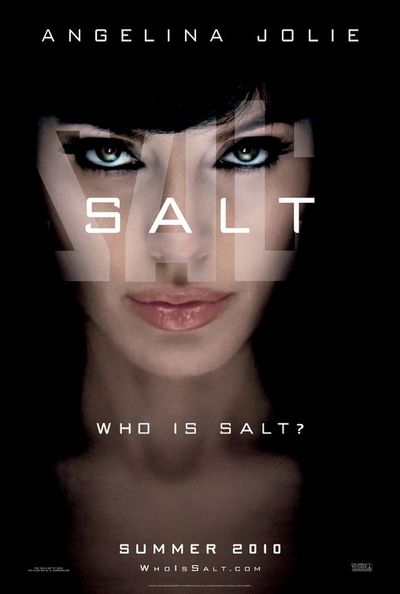