“Dinner from Schmucks” is the type of comedy that doesn’t understand the proper time to take a bow and exit the stage. It’s a funny picture that pays careful attention to the rituals of dumb guy cinema, but if there ever was a film that could’ve been a multiplex miracle at 80 minutes, it’s this movie. Instead, matters meander for nearly two hours, diminishing a pure expression of stupidity, carried out by a prepared, skilled ensemble.

Tim (Paul Rudd) is a financial wizard looking for his big corporate break. Hoping to impress his boss (Bruce Greenwood), Tim finds the perfect opportunity to join the inner managerial circle, asked to prove his worth at a monthly dinner where the suits bring idiots as their guests, encouraging a night  of mockery. Tim’s sensitive girlfriend, Julie (Stephanie Szostak), disapproves, but the lackey can’t turn down the invitation, especially after happening upon Barry (Steve Carell) by accident. A nervous architect of mouse dioramas with a compulsion to screw up any situation with his earnest behavior, Barry is the perfect choice for the gathering of morons. However, the more Tim gets to know his dinner date, the more he questions his decision to join the cruel party. 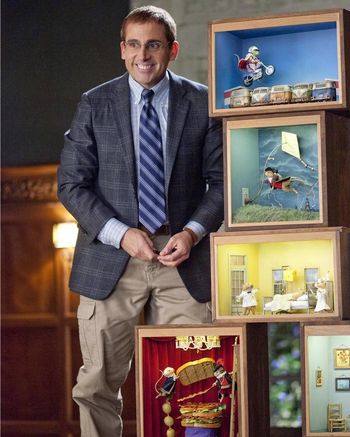 An update of the 1998 Francis Verber comedy, “The Dinner Game,” “Dinner for Schmucks” attempts to funnel all that farcical French force into an American arena, where stupidity is often regarded as a form of tragedy. Taking directorial command is Jay Roach, who appears to have a firm grasp on silly behavior, having guided the “Austin Powers” franchise and a few of the “Meet the Parents” pictures. Roach is an odd man for the job, despite his comedy pedigree, as “Schmucks” requires a slightly devious mind that can work a tone hovering somewhere between merciless and affectionate. Roach only appears to be interested in sympathy, making the feature an uneven mess of bellylaughs and concern.

When “Schmucks” does dare to be funny, the cast is right there to summon the laughs through wise performances that tune into the picture’s sporadic chaos. Rudd plays his umpteenth straight man here, but he’s comfortable in the role, providing a welcome center of disbelief as Tim observes Barry and his dim-bulb sincerity, which often takes the form of a runaway train. Carell kills as the main moron, swallowing most of his semi-cynical, deadpan delivery to monkey masterfully, making Barry this ultimate machine of good intentions pointed in all the wrong directions, causing mass destruction with every positive thought. There’s pure hilarity to be had when he winds all the way up. 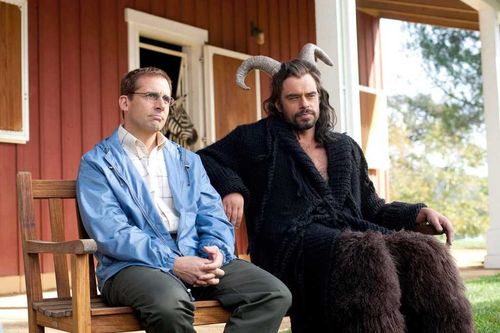 Also amusing is Jemaine Clement as a womanizing, animalistic artist out to score Julie when Tim drops the ball, and Zach Galifianakis, who pops up as Barry’s rival, a vicious IRS man who believes he’s in possession of mind control. Actress Lucy Punch also hits a few high notes in a brief supporting turn as Tim’s former one-night-stand-turned-obsessed-stalker. When Roach allows the movie to kick back and survey the destruction, the cast positively floats along, gleefully slopping around the silly business like unleashed kids on the first day of summer vacation.

Feeding the impulse to care about Tim and Barry, Roach lets all the air out of the film, dragging out the antics for far too long. The sympathetic strain of the picture is useless; a more skillful filmmaker could’ve easily found a way to ground the characters in emotional authenticity without slamming the brakes to tap for syrup. There’s too much swirling around the film, from characters to backstory, and Roach can’t handle the workload. The disorder leaves “Dinner for Schmucks” clogged up with needless distractions, electing to table the laughs for later. Now that’s stupid.