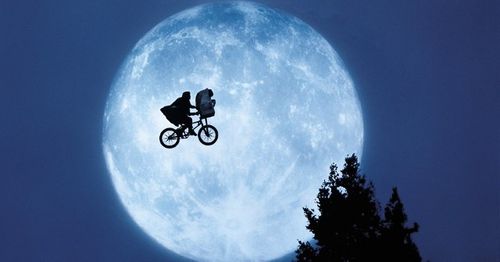 Midway through the summer of 1982, there was no one absorbing more power in Hollywood than Steven Spielberg. With his sci-fi masterpiece, “E.T.: The Extra-Terrestrial,” Spielberg not only had a smash hit flexing unreal box office muscle, but a motion picture that won over every audience it played for, burrowing straight into total cultural consciousness. The success of the picture guaranteed many changes for Spielberg that summer, but two matters were most certain: he would attain world cinematic supremacy and the studio would demand a sequel.

When the dust finally settled, “E.T.” reigned as the highest grossing film of all time, guaranteeing Universal Studios would want further adventures for the friendly alien. And they did come a-knockin’ a few weeks after the film demonstrated miraculous box office hold. Imagine being Steven Spielberg, with a studio groveling for more alien activity, offering untold riches to bring E.T. back to Earth. The man could’ve made anything he wanted and the studio would’ve been thrilled. E.T. in the old west, as a founding member of The Beatles, or teaming up with Shabba Doo to solve mysteries -- Spielberg was in a rare, frighteningly dominant professional position. 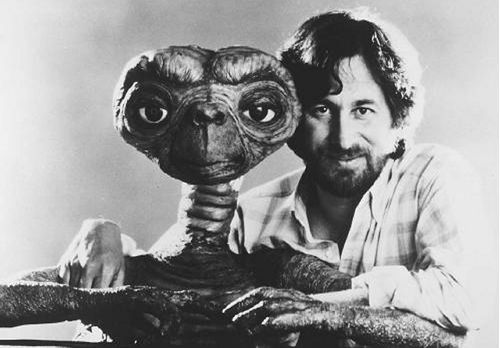 For years, the filmmaker had always swatted away talk of an “E.T.” sequel. Outside of a young adult novel, “E.T.: The Book of the Green Planet,” and a sublimely acid-trippy ride once available at various Universal Studios theme park locations (now only standing in Orlando), Spielberg was careful not to encourage interest in a follow-up film. It was a brave stance, considering the artistic and monetary opportunity involved with such matters, and I’ve always respected Spielberg for his restraint. After all, in my estimation, “E.T.” is a perfect film, with an emotional touchdown run of an ending, blasted with bittersweet goodbye. To return the alien to Earth would only torch the gentle blubbery sustain.

Unbelievably, Spielberg actually attempted to construct a sequel long ago. And I just learned of it yesterday.

In the weeks following the film’s debut, Spielberg and “E.T.” screenwriter Melissa Mathison cooked up a story treatment for a proposed sequel, titled “E.T. II: Nocturnal Fears.” Dated July 17, 1982, the 10-page document arranged a rather dire alien escapade for Elliot and E.T., with emphasis on malevolent extra-terrestrials, evidently enraged to offer the sequel a unique identity, away from the sentimental (yet responsibly shaded) tsunami of the first picture. 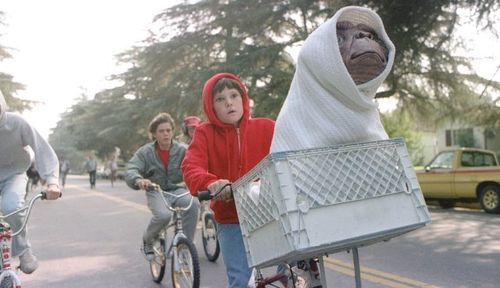 A vicious alien named Korel has landed on Earth with his dutiful soldiers, chasing the distress signal sent by E.T. (branded “Zrek” in the treatment) in the original film, with hopes to capture his enemy and claim glory for his people. A carnivorous pack of troublemakers, the aliens feast on nearby cattle as they hunt for the source of the beacon. For Elliot, Gertie, and Michael, life hasn’t been the same since Zrek exited their lives, with mother Mary and boyfriend Dr. Keys concerned that the kids will never be able to get over the loss of their long-fingered friend. Misinterpreting signs pointing to Zrek’s return, Elliot and the gang race out into the forest for a reunion, only to find Korel, who doesn’t believe that Zrek has left Earth for his home planet. Imprisoning the group onboard his ship, Korel questions and tortures Elliot, forcing the boy to cry out for his beloved pal, who hears the call on the other side of the cosmos.

First of all: Zrek? I did not need to know E.T.’s name. Sounds like something pulled out of the sci-fi hopper George Lucas employs when constructing his “Star Wars” scripts. Zrek. I guess I’m relieved Spielberg didn’t attempt to cutesy the moniker up with something like “Glohaart,” “Britetuch,” or “Waddleor.”

While existing only in story treatment form, “Nocturnal Fears” is clearly the work of a man who wanted to break away from the serenity of his greatest success. The plot comes across much too aggressive, with animal slaughter and torture filling screen time, attempting to refuse rehash syndrome by welcoming darkness (at least the more strident type of doom, as the original is certainly filled with nightmarish detours and somber domestic woes). It’s a grim concept for a follow-up, which is perhaps why it never made it past this short stack of pages, hastily banged out in the wake of a developing phenomenon. 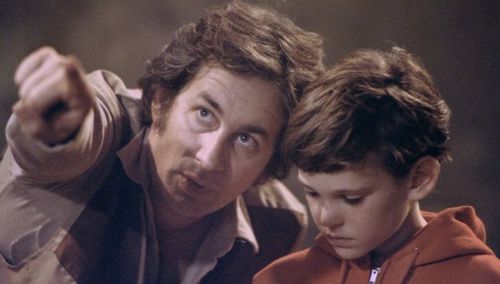 Still, there’s a small part of me that sort of wishes “Nocturnal Fears” came to be, just to see exactly how far the filmmaker would’ve taken the prickly premise. I suppose 1984’s “Indiana Jones and the Temple of Doom” is the logical result of this burgeoning sequel rage. Still, the wild sight of E.T. defending a teary Elliot from a bloodthirsty invader would’ve been a demented thing of beauty, especially after the global coo that swaddled the 1982 film. 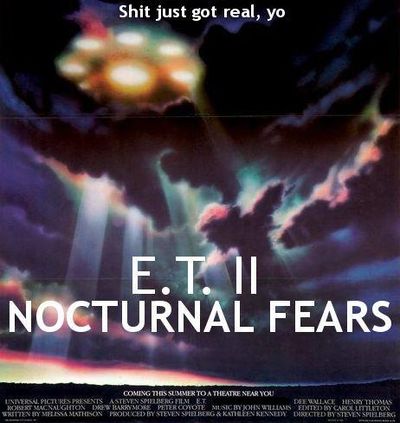