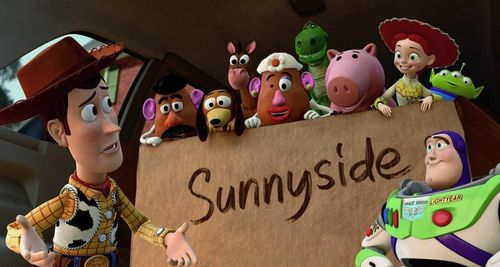 Pixar cautiously entered the sequel game 11 years ago with “Toy Story 2,” a development that was somewhat forced upon the company, but proved to be an artistic and financial success. Now the beloved animation house is beginning to make sequels a full-time business, with follow-ups to “Cars” and “Monsters, Inc.” in the production pipeline. However, priming the franchise machine is “Toy Story 3,” a long-awaited second sequel that reunites beloved characters with a frazzled plot that exploits every ounce of plastic neuroses it possibly can. The third time isn’t exactly the charm for this friendly series of films, but this next step in the evolution of Buzz and Woody is dutifully manic and frequently engaging.

Once a boy, now a man, Andy is heading off to college, leaving his toys, led by Woody (voiced by Tom Hanks) and Buzz (Tim Allen), in a panic. Worried about a myriad of possible fates, including the dreaded garbage option, the gang inadvertently ends up in a box set for donation to a local daycare center. Overwhelmed with joy to be relocated to a place where toys are played with every day, the pals soon learn the dark side of toddler attention, kept in their place by the seemingly mild Lots-O’-Huggin’ Bear (Ned Beatty) and his army of experienced toys. With the situation growing grim, it’s up to Woody to plan a great escape, working with his friends to bust out of the daycare center and return to Andy. However, the plan is fraught with peril and setbacks, including a confused Buzz, who’s been returned to his initial factory settings by the wicked bear. 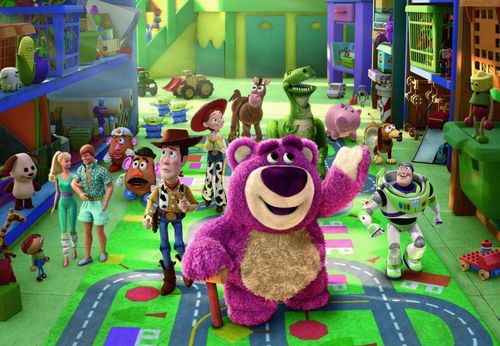 Little could possibly match the spark of life found in 1995’s “Toy Story.” The feature not only laid the foundation for CG-animation, but it found a special grace note of cartoon expression, spinning a tale that worked nostalgia and teamwork to wonderful emotional heights. As most sequels eventually learn, the thrill is gone for “Toy Story 3,” which takes its time to regroup and figure out a new plan that avoids strict rehashing. The theme here is friendship and the realization of one’s true home; with Andy leaving for college, the toys are left without purpose, without life, fearful of time spent in the attic or worse, left on a curb for the garbage man. It’s an inventive way to restart the film series after such an extended break from cinemas, leaning hard on the troublesome idea of change when the warmth of remembrance is far more comforting.

By playing up the sheer anxiety generated within Andy’s core group of toys (including John Ratzenberger as Hamm, Don Rickles as Mr. Potato Head, and Joan Cusack as Jesse), “Toy Story 3” is gifted an actual direction for the new film, which works to create a sense of desperation as our little plastic heroes find themselves trapped in their daycare center prison, with warden Lost-O’-Huggin’ Bear (a.k.a “Lotso”) willing and able to keep his paradise on lockdown after his own experience with losing an owner twisted his plush heart. Director Lee Unkrich and screenwriter Michael Arndt have fun with the daycare setting, arranging tributes to “Bridge on the River Kwai” and investing time in Lotso’s underlings, including fashion-minded Ken (Michael Keaton), who comes alive at the sight of Barbie (the one toy that understands his metrosexual needs). The script seems more invested in whimsy than laughs, which allows the second act to sag ever so slightly, but the sense of confinement is a rich avenue for the film to explore, despite Lotso not being the most tantalizing villain presence, worked into a movie already pulled in multiple directions due to the sheer volume of characters. 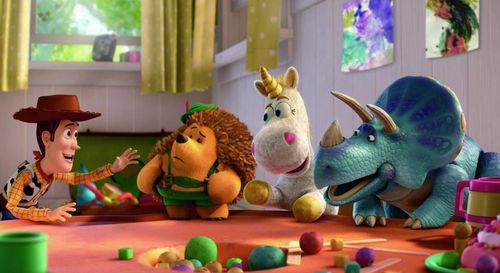 The overpopulated toy nation does offer a few causalities, most notably when Woody splinters off on his own adventure encountering a small group of contented dolls enjoying their first years with their young owner. Voiced by Bonnie Hunt, Jeff Garlin, Kristen Schaal, and Timothy Dalton, the gang generates major laughs, while providing a potent reminder that the “Toy Story” concept works best when sorting our small groups of players. Woody’s scenes with these delighted helpers are some of the best in the movie, but they’re gone in a flash. A shame.

Forging a Randy Newman interlude and handing Buzz a thin subplot that finds the space ranger reverting back to his Spanish origin, “Toy Story 3” remains the longest of the series, and feels it at times, fixated on punishing the characters to make their redemption all the more emotionally sweeter. The climax is overkill, taking the gang to edge of destruction, but the dark psychological spaces of the finale (a veritable Christmas morning to anyone who’s ever wanted to see Woody and the gang prepare for death) help to butter up the conclusion, which does a fine job of sniffly closure without exactly sealing off the opportunity for another sequel. 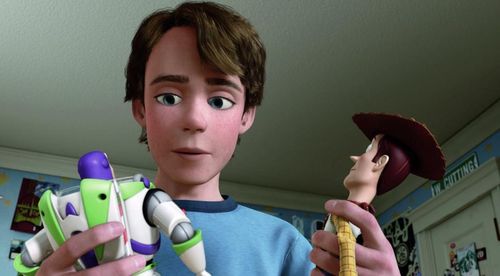 Entertaining and, as always, magnificently performed by the cast, “Toy Story 3” is an easy lay-up for Pixar, but they’ve come to the challenge of a second sequel with some sense of duty, expanding the franchise to accommodate an epic take on the bond of companionship and the quest for the loving reassurance of home. 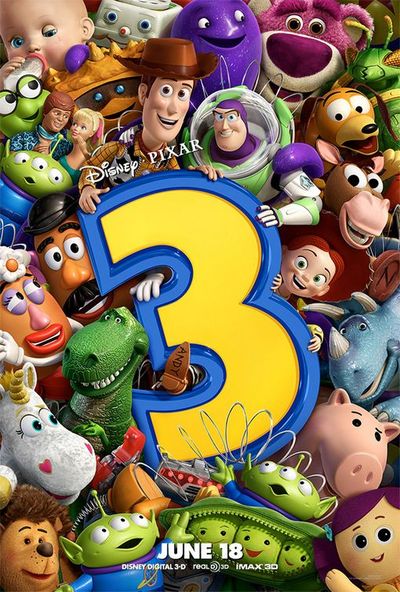