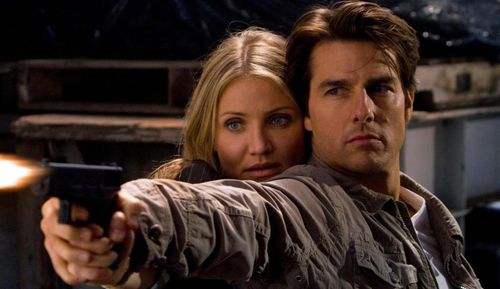 It’s fantastic to see Tom Cruise back to being enthusiastic and jittery in “Knight and Day,” though it’s a shame the film doesn’t support that soaring effort. A strangely strained spy caper, “Knight and Day” has its share of derring-do, explosions, and flirtation, but director James Mangold doesn’t shape a scintillating feature out of the ingredients. Instead, there are a few key stunt sequences that are smoothly rendered, but the film as a whole lacks a pulse-pounding, swoony mood of adventure and romance. Still, it does have Cruise, and he’s almost worth a recommendation alone for his spirited efforts.

Crashing into each other inside a Wichita airport, Roy (Tom Cruise) and June (Cameron Diaz) spark up a peculiar chemistry, ending up on the same flight home. On the plane, Roy reveals himself to be a particularly skilled secret agent wrongly accused of going rogue, reluctantly taking June with him as he sets out to protect an energy-sustaining battery created by a teen genius (Paul Dano). Freaking out, June attempts to escape on several occasions and return to her normal life, but Roy’s actions have triggered encounters with assassins and government agents (including Peter Sarsgaard and Viola Davis), leaving the frightened woman with no choice but trust this mystery man. Chased around the globe, Roy fights to protect the battery, while June grows fond of her guardian, despite his shadowy history and inability to stay out of trouble. “Knight and Day” has all the trimmings of a successful summer blockbuster, taking great care to organize intricate stunts, working a plot that encourages global warfare, and submits two attractive stars with an assured click of chemistry. It’s hard to argue with the package, but Mangold doesn’t seem to possess the proper vision for the actioner. The director is caught on the edge of teetering tonality, which touches on light rom-com basics of bickering and googly eyes, while filling the film with numerous shootouts and explosions. It should be free-throw stuff for any director, but the competing moods confuse Mangold. “Knight and Day” doesn’t snowball into a rollicking good time; instead, it only energizes in small doses, failing to connect the pieces and build momentum.

Mangold bungles a few imperative comedic moments, most centered on Roy as he attempts to retrieve June from the clutches of evil -- a grasp she isn’t exactly itching to leave at times, out of fear of Roy’s unpredictable behavior. Cars flip and explode, bullets whiz around the frame, and the actors look suitably lathered. The elements do find a way to form a thrilling whole when leaning on Cruise to sell the outlandish set-pieces. Always a dedicated actor, Cruise throws himself right into the heat of the action, slamming into cars and flying through the air with A-list grace, doing his damnedest to create excitement wherever he can. Diaz is less impressive, with June mostly standing aside and squealing, but for what the role is, the actress makes what she can out of it. However, “Knight and Day” is far more engaging when Cruise slips into fractured hero mode, creating a fantastic sense of the impossible while keeping camp out of the equation. 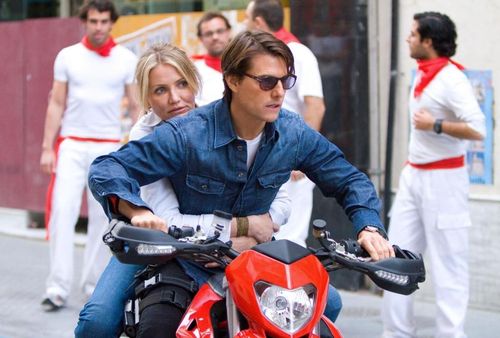 The screenplay is more irritating than enthralling, with obvious villains and a cutesy method of globetrotting without actually covering the movement (June is frequently drugged, waking up in alien locations while Roy fends off the baddies). Also frustrating is June’s lack of protest in the early going, basically sucked into a series of life or death adventures without ever stopping to ask why. June’s gullibility is a bit of a cheat to get the characters into increasingly heated circumstances, but her reluctance to question anything in front of her comes off as ridiculous, even in a film that embraces the absurd now and again.

Growing increasingly labored the more it attempts to create suspense around the whereabouts of the battery, “Knight and Day” wheezes to a closer instead of delivering a fantastic killing blow. Of course, the rest of the film doesn’t exactly promise a heart-stopping conclusion, but it’s easy to feel some sense of hope when Tom Cruise springs into action, back in a genre he consistently elevates with his pinballing bravado. 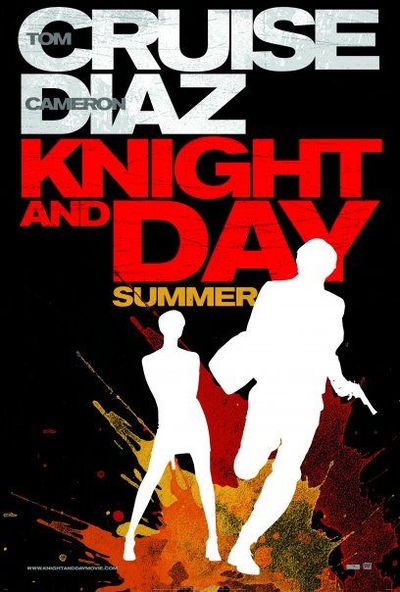