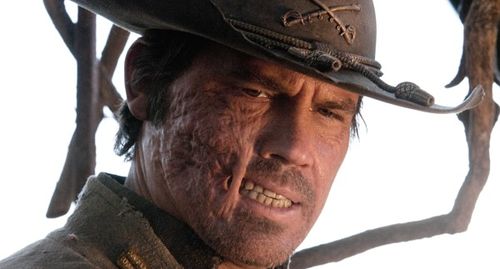 “Jonah Hex” isn’t necessarily a bad film, it’s just nothing at all. Oh, there’s plenty wrong with this big screen adaptation of the DC Comics western hero, but it’s hard to stay angry with the film when the fingerprints of studio intervention are all over this movie, which has been whittled down to a scant 74 minutes in length. It’s hard to accomplish anything richly cinematic in 74 minutes, much less create a persuasive adventure for a character who’s been kicking around the world of funny books since 1972.

Turning on his psychotic superior Turnbull (John Malkovich) during the Civil War, Jonah Hex (Josh Brolin) was rewarded with the murder of his family and Turnbull’s brand burned across his cheek. Left for dead, Hex survived due to the resuscitative efforts of the local Native Americans, who gifted the disfigured gunslinger the ability to speak with the dead. Now a nomad bounty hunter, Hex is called back into military duty by President Grant (Aidan Quinn) when it’s clear Turnbull is once again up to no good, assembling a doomsday weapon capable of destroying America on the eve of its centennial celebration. Off to slaughter the man that ruined his life, Hex finds a distraction in saloon whore Lilah (Megan Fox), the one person to find a soul within the scarred killing machine. 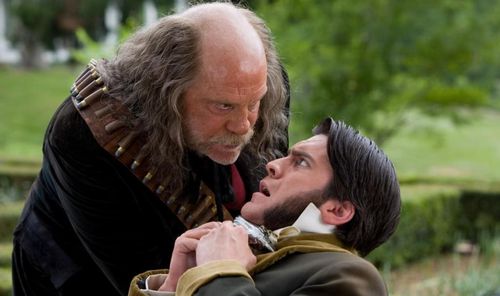 Perhaps handing a gruff, violent comic book icon to the director of “Horton Hears a Who” wasn’t the best idea in the world. Jimmy Hayward is clearly out of his element with this picture, unable to plainly communicate the necessary information it takes to build a simplistic story of revenge, villainy, and mass destruction. Actually, Hayward has the destruction part down pretty well, since most of “Jonah Hex” is devoted to overkill explosions, trying to keep the audience awake while the meat cleaver editing mangles the story past a point of recognition. There appears to be much more to the world of “Jonah Hex” than this movie lets on, with the studio shaving the final product down to basic elements of violence, sex appeal (oddly, Fox’s face has been digitally smoothed out for reasons unknown), and scenery-chewing performances. The entire mythology of Hex has been lost in the hasty cutting, leaving behind a teeth-rattling bore that never lifts off the ground.

Of course, I’m merely assuming the studio went crazy reining in the final cut of “Jonah Hex.” After all, the screenplay is credited to Neveldine/Taylor, the gentlemen behind the intolerable “Crank” franchise and “Gamer.” Seeing how the twosome have refused all opportunities to tell a coherent story before, perhaps “Jonah Hex” is intentionally distracted, blurring past bizarre mystical behavior that has our hero conversing with the dead (using dirt to “cool” the corpses down before Hell comes calling), or envisioning his final fight with Turnbull in acid-trip hues before he ever has a chance to sock it to the bloated bad guy in person. It’s never outright confusing, but the script is just vague enough to keep Hex a total question mark all the way through to the end credits. 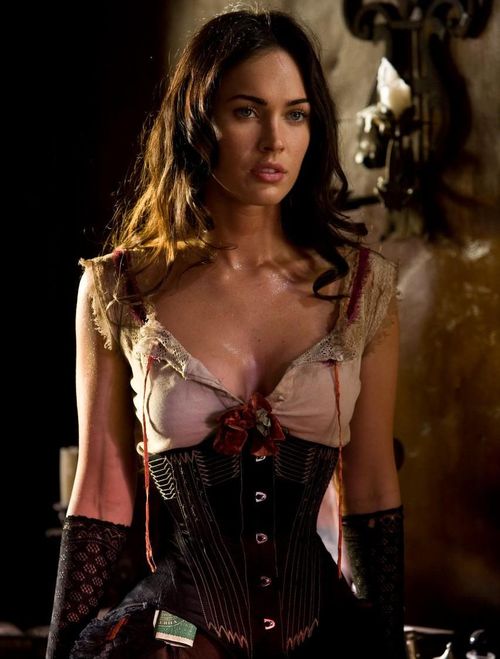 The grimacing bright spot here is Brolin, who’s well cast as the half-dead hero, attempting to spit atrocious lines past his mouth-sealing facial makeup. Brolin has the swagger for Hex and the cowboy knowhow, but his charms can’t slap the movie awake, though he earns a participant ribbon just for enduring some of the more hopeless ideas here, most merging Old West traditions with borderline sci-fi touches. Malkovich is Malkovich, sleepwalking through his villain role, but the real curiosity is Megan Fox. Prominently billed in the marketing, Fox only hangs around the picture for maybe 10 minutes tops, long enough to purr her own set of awful dialogue and display her tightly corseted figure. In the end, there’s no reason for her character to even exist in the screenplay.

Despite nanosecond cameos from a host of semi-famous faces (including Will Arnett, Michael Fassbender, Wes Bentley, Jeffrey Dean Morgan, Michael Shannon, and Tom Wopat), “Jonah Hex” never gets up to a full gallop, instead lurching from beat to beat minus necessary connective tissue to make the mayhem matter. Glossy and gutted, “Jonah Hex” turns the cowboy with a melted mouth into a grunting moviegoing chore. But at least it’s a ridiculously short chore. 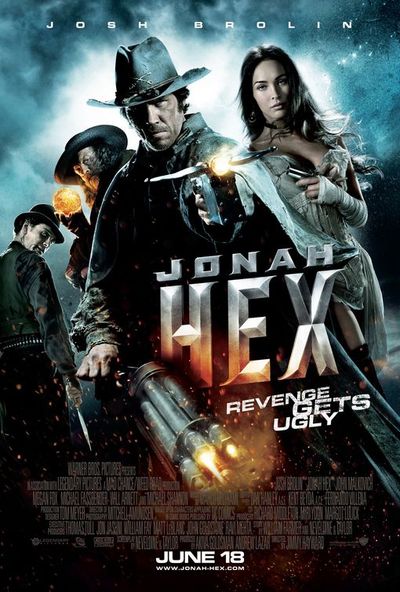