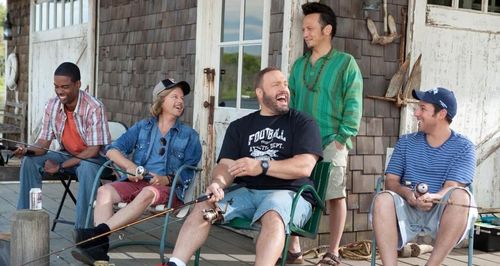 Ever wanted a film to work so badly, it involved the crossing of both fingers and toes? Ever wanted to have as much fun as the cast onscreen, watching helplessly as the talent kicks up a giggle storm, clearly enjoying the heck out of one another? The experience of watching “Grown Ups” is a sustained squeeze of agony, observing an easygoing, star-studded, summertime comedy stumble through a series of ridiculous, stillborn scenes that barely add up to a movie. Here, the audience is made to watch Adam Sandler’s summer vacation video, which displays how much fun he had, and how little of that merriment and camaraderie translated to the screen.

Friends since 1978 when they won a basketball championship together, Lenny (Adam Sandler), Eric (Kevin James), Kurt (Chris Rock), Marcus (David Spade), and Rob (Rob Schneider) have gone their separate ways during the march into adulthood, finding various degrees of success. Now faced with the death of their beloved coach (Blake Clark), the gang has reunited for a weekend of remembrance at a lake resort they loved as kids. Taking the wives (including Salma Hayek, Maria Bello, and Maya Rudolph) and dragging the kids away from their video games, the guys set out to make the weekend a blast like the good old days, while the outside world keeps reminding them that not much has changed. 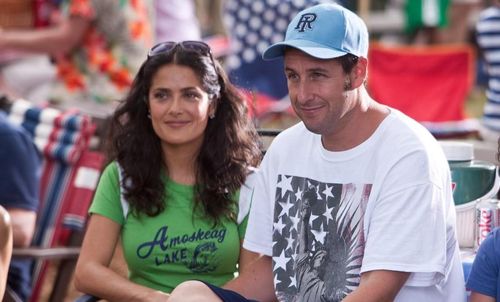 I’ve never been secretive about my love for Adam Sandler, delighting throughout the years in his goofball antics and dedication to the absurd. However, something happened to the actor around 2006 with the rancid “Click” that changed the once proud sultan of stupidity into a cautious businessman, hiding behind a thick gauze of sentimentality to boost his box office appeal. The clown within Sandler began to die, and I feel “Grown Ups” might represent its final breath.

A summit of broheims, “Grown Ups” pulls together the full range of the Sandman’s crew, from the legacy (Schneider) to the recent addition (James). The script by Sandler and Fred Wolf provides a thin netting of plot, with the rest of the film spinning between obviously improv-cooked banter and sticky domestic reflection, as the old dogs begin to understand themselves while in the midst of recreating memories. The concept would be a blast if the jokes weren’t so strained, with five camera hogs competing for screentime despite not having anything funny to share. It’s a weird sensation to watch these comics gasp for air, but without any actual writing to support them, it all hurriedly becomes a suffocating din of various verbal deliveries.

The gags are incredibly pedestrian, most centered on Eric falling down or talking up food (the fat jokes with James are beyond old at this point), Rob making out with his elderly wife (a running May-December gag that’s mummified by the end of the film), or Marcus drinking himself into a coma, hitting on all the single ladies. The script uses the natural personalities of the comedians as a jumping-off point, but doesn’t bother to escalate the tension, preferring to soak up the AM radio mood director Dennis Dugan (another faithful Sandler employee) lazily pushes along, letting the actors do whatever pleases them, which, in James’s case, involves running around with a KFC bucket over his head. Yeesh.

To his credit, Sandler attempts to wedge in some of the old insanity that built his career, calling upon his support team of cameos to liven up the picture (Steve Buscemi scores the film’s only real big laughs), while drizzling in a nice helping of weirdness to the parental duties of the gang. But even that bores Sandler, who orders up numerous poop, pee, and fart gags to slaughter the film’s faint sense of humor, even throwing in a good bestiality joke and some rear nudity from Spade to creep out the room. The waste of talent here is outrageous, eschewing profound laughs and a sillyhearted good time to squirt Maya Rudolph in the eye with breast milk. Yeesh deux.

“Grown Ups” doesn’t exactly apply the brakes with sappiness, but the film cautiously pumps along to stay safe, hoping to appeal to the moms and dads out there who might relate to the shimmery lost summers of yesteryear. “Grown Ups” is lazy like that, barely making an effort when it’s clear that no matter the quality, crowds will line up anyway. Until his box office fortunes truly take a dive, I fear Adam Sandler is done making any noticeable effort. 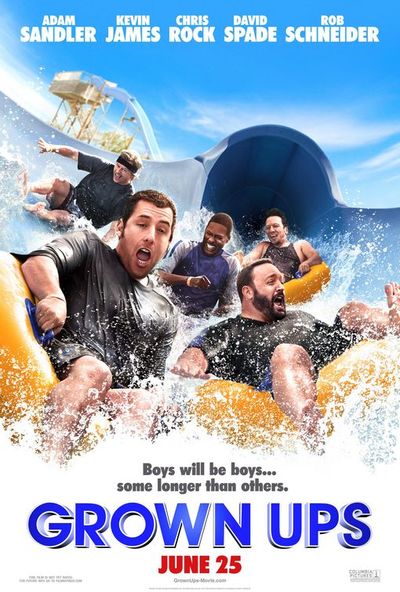