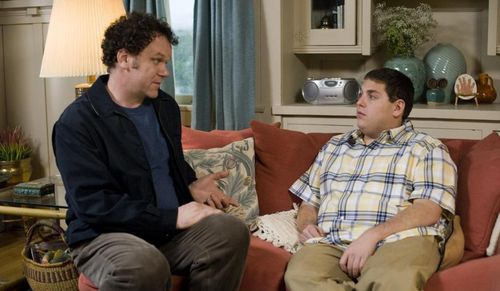 After leading a nation of art-house cinemas into the land of mumblecore, the Duplass Brothers, Jay and Mark, try to up the ante some by enlisting a few Hollywood stars for “Cyrus.” A more sedate, straightforward comedy of discomfort and jealousy, “Cyrus” is a mixed bag of dramatic speeds, with the filmmakers struggling to locate a soul to a one-joke premise aching for a more profound funny bone.

John (John C. Reilly) is still lost in depression seven years after his painful divorce from wife Jamie (Catherine Keener), who’s about to remarry. Urging him to meet people, Jamie takes John to a party where he strikes up a conversation with Molly (Marisa Tomei), finding special chemistry with the enigmatic woman. Falling into a relationship, John discovers Molly lives with her 21-year-old son Cyrus (Jonah Hill), a fledgling musician prone to night terrors and anxiety attacks. Trying to romance a willing Molly, John finds Cyrus is attempting to sabotage the coupling through modest acts of disruption and manipulation, leading the baffled suitor to consuming bouts of paranoia and disbelief.

With “Baghead” and “The Puffy Chair,” the Duplass Brothers have created a comfortable filmmaking identity, working improvisational, introspective angles to help freshen indie cinema. “Cyrus” isn’t a mumblecore picture, but it keeps to a zoom-happy, observational distance that permits a looser approach to the mechanics of love and psycho sons. The Duplass Brothers keep their film light and bewildering for as long as they can, extracting jokes from John’s discomfort and Cyrus’s almost Zen-like malice, pitting the two in a war of whispers and dirty looks so as not to upset Molly and her triumphant return to the world of steady sex and emotional bonding.

There are plenty of hearty laughs to “Cyrus,” most centered on John’s increasing anxiety, forcing him to return to Jamie for advice to make sure he’s not losing his mind. It’s a lovely performance from Reilly, who smoothly blends into the Duplass Brothers’ slack manner of filmmaking, making reactions count more than motivation. Hill also makes quite an impression as the mama’s boy, fashioning Cyrus as a warrior for domestic stability, armed with icy stares and extended pauses. The actors play off each other superbly, giving the film a lift with a few comedic moments of confrontation, most concerning a pair of missing athletic shoes that John accepts as a sign that Cyrus is up to no good.

“Cyrus” eventually abandons the laughs to take matters seriously, which is an odd direction for the filmmakers, fitting the film for a heavy chain mail coat of sentimentality when the rest of the picture plays breezy and sly. Because the Duplass Brothers insist on distance throughout the picture, there’s not much of an emotional connection made to these characters, making a third-act move to melodrama inconsequential. The direction isn’t firm enough to carry the load, and while “Cyrus” is capable of expressing sinister thoughts and sneaky acts of deception, the one element that’s never tended to is its heart. “Cyrus” didn’t need the poignancy, it needed to sustain its winning edge of humor. 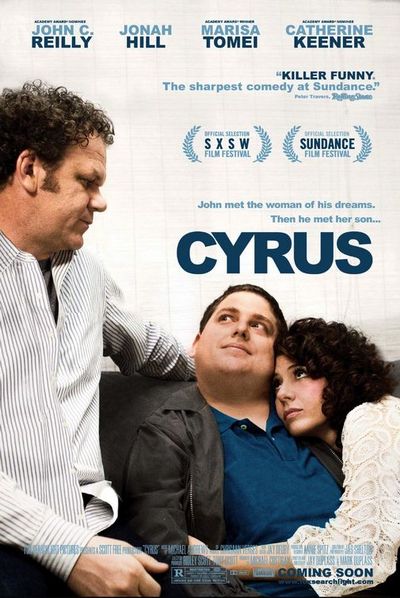