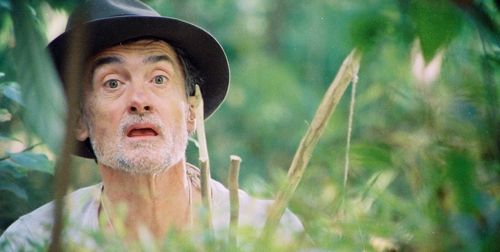 There’s a delicate environmental quality to “Crazy Like a Fox” that’s often more inviting than the drama unfolding. A bristly story of heritage and community, the picture is a bizarre combination of broad comedy and stinging sentiment, helped along by a sharp cast and a wonderful view of the Virginian wilderness, which takes a much-deserved supporting role in this itchy, exasperating film.

An eighth-generation farm owner in rural Virginia, Nat Banks (Roger Rees) is facing the conclusion of genealogical dominance when mounting debt forces him to put his treasured family estate up for sale. Making a handsome offer are two L.A. real estate sharks (Paul Fitzgerald and Christina Rouner), tentatively stepping around Nat and wife Amy (Mary McDonnell) as tempers flare over the future of the farm. Once the sale goes through, Nat snaps, reverting to the mentality of his Civil War ancestors, taking up residence inside a cave on the property and living off the land. Amy is stunned but tolerant with his actions, urging Nat to calm his scattered mind, while the new neighbors find their big city plans for the farm are met with a great deal of hostility from the locals.

Despite a lightly zany tone, “Crazy Like a Fox” has something interesting to say about the threat of gentrification and the breadth of family history. Writer/director Richard Squires clearly defines the dilemma at hand, offering Nat not just as a cantankerous, unshowered coot with severe money problems, but a guilt-ridden soul as well, ashamed to be the generation that torches hundreds of years of southern tradition. The pain eats away at the character, who holds tightly to the farming routine of his life, only to find the world changed around him. There’s a certain poignancy to the film that Squires isolates well, communicating the frustrations and humiliations that come with a longstanding home sale -- a clench of terror made all the worse by the actual buyers, played with broad Aryan venom by Fitzgerald and Rouner.

While there’s a discouraging reality to “Crazy Like a Fox,” the cast keeps the material optimistic, especially Rees as the wild man Nat. A Welsh actor fitted for a Virginian accent and tattered clothes, Rees digs into the role with both hands, finding shades to Nat that keep the character away from tiresome cliché. It’s an oddball, semi-feral pass at articulating domestic desperation, but the actor is game for what the filmmaker is trying to achieve. Balancing him well is McDonnell, who brings a soothing quality to her role as the beleaguered wife. The pair shares comfy chemistry, supplying a beating heart to the proceedings.

“Crazy Like a Fox” is an approachable character piece with a strong sense of its surroundings, highlighting a wonderful aura of nature beyond all the bickering. Perhaps it’s not the most urgent entertainment, and it leans toward the obvious whenever it can, but the overall peaceful yearn of the picture is welcoming, along with its superior, expressive thespian efforts. 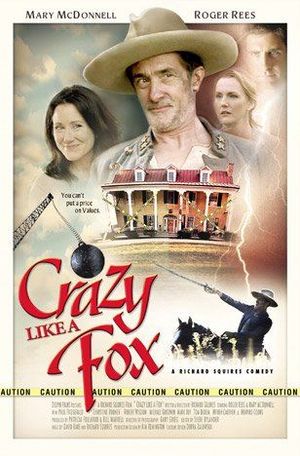