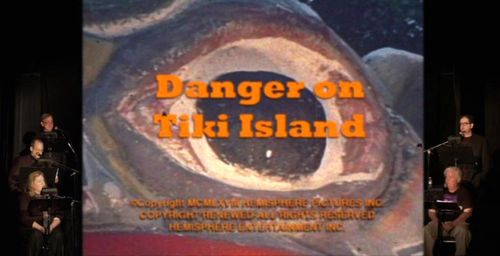 What happens when you cross a film containing carnivorous trees, angry moths, and a lead actress billed as “Beverly Hills” with a group of ace comedians doing their best to make light of a dire moviegoing experience? Well, it means Cinematic Titanic has returned. Roughly four months after their last effort, “The Alien Factor,” the troupe has surfaced again to deliver 90 minutes of consistent laughs with “Danger on Tiki Island,” a wildly incoherent, bizarre horror film that provides the flood of awful the riffing gang needs to successfully land some satisfying bellylaughs.

The target here is 1968’s “Danger on Tiki Island” (a.k.a. “Brides of Blood”), a no-budget Pilipino production of extreme confusion, directed by the classic filmmaking duo of Gerardo de Leon and Eddie Romero (what, you’ve never heard of them?). The running gag of the film and the Cinematic Titanic experience for this round of mockery is the vagueness of the plot, with the film leaping into characterization and investigation without much in the way of an introduction. 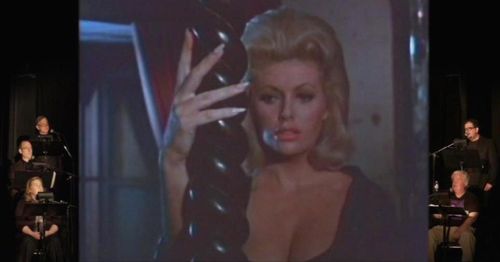 The disorientation is key to enjoying the whole shebang, multiplying the delights with a tale that ever so faintly observes a pair of scientists and a hot blonde (bombshell Beverly Hills, who left a career playing strippers and sexpots in Hollywood to marry people in Maui, where she now works as Christian minister) traveling to a remote Polynesian island to study the effects of bomb testing radiation on the natives. Once arrived, matters slip out of hand quickly, as the trio learns of virgin sacrifice to a local monster, and are forced to combat various mutants that are out for blood. Also complicating matters: a strange sexual pull in the air that has the mighty Ms. Hills out to hump anything that moves.

The film’s almost causal oddness leaves it wide open for ridicule, with Cinematic Titanic (Frank Conniff, J. Elvis Weinstein, Mary Jo Pehl, Joel Hodgson, and Trace Beaulieu) digging into the overall confusion and thespian detachment to horrific sights and freakish warning signs.”Danger at Tiki Island” is an impossibly bad movie, but the filmmakers appear to be aiming for something epic and frightening, which leaves a mess the troupe easily dissects with their fabulous wits. Of particular fixation is the film’s rather crude production efforts, which observes a world of mutant flora and fauna yanked around by strings and production assistants, and the demon itself, which Conniff likens to Sigmund the Sea Monster. References to Michael Phelps (during a smoke shot) and Tom Servo help to goose the evening along, but the best jabs are saved for the bizarre sexual vibe of the picture, which ranges from a rather ludicrously pronounced threat of infidelity to scenes of  virginal sacrifice, which, of course, require the girls to be nude. The exploitation tricks plate up perfect openings for Cinematic Titanic to devour the insanity, leading to a consistently giddy release, not one of manic highs and lows. 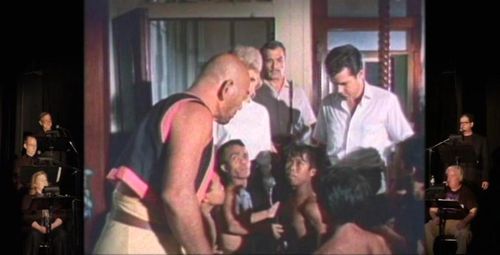 Also up for comedic discussion is the island’s population of little people, who inhabit the local mansion in service positions, speeding around the frame avoiding detection. The troupe gets a lot of mileage out of their presence, which leads to a few groaners, but it’s all in the name of good fun.

“Danger on Tiki Island” is the group’s third live DVD release, which is arguably the best venue for their gifts. Playing out in front of a theater audience, Cinematic Titanic feeds off the energy in the room, infusing a sense of joy to the riffing, while allowing themselves an opportunity to build on their jokes and, in a few cases, bomb outright. It’s a fresh method of delivery, and again suggests that perhaps Cinematic Titanic is best with the people, not inside of a studio.

Something for family audiences to keep in mind: “Danger on Tiki Island” riffing includes some mild cursing and nudity. Consider the DVD more of a PG-rated experience.

Presented in anamorphic widescreen (1.85:1 aspect ratio), the “Danger on Tiki Island” DVD presentation makes marvelous use of the frame, leaving the option open to ignore the faces delivering the jokes by simply fixating on the film itself. The program seems stable and in line with the rest of the Cinematic Titanic releases.

The Dolby Digital 2.0 sound mix preserves the straightforward audio experience, holding the audience laugh track to a less intrusive level of interaction, while the professionals go about their laugh business. All jokes and improvisational muttering is clearly audible. 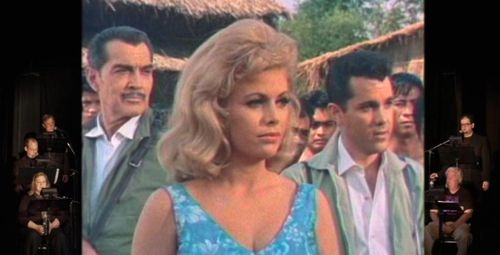 “Between the Riffs” (17:50) is a series of backstage interviews with the Cinematic Titanic crew, exploring their relationships, eccentricities, and gifts, with a great deal of respect passed around, along with the requisite interpersonal jesting. It’s a wonderful spotlight on the people behind the jokes, helping to understand how the gang interacts and assembles an episode.

Another triumphantly hilarious chapter in the ongoing saga of Cinematic Titanic, “Danger on Tiki Island” distributes the laughs and the junk movie amazement, as bad cinema meets inventive teasing for another enormously satisfying release. 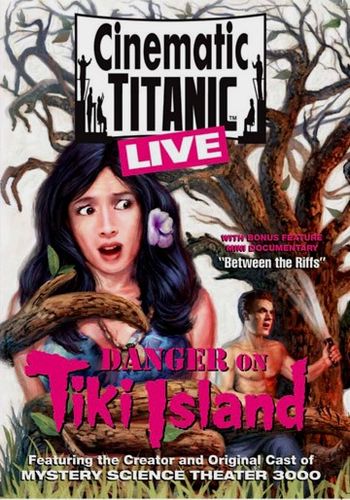