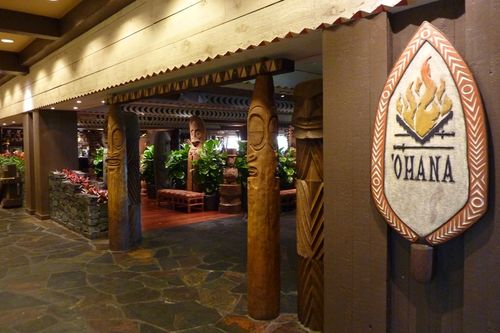 I’ve come to the conclusion that ‘Ohana should be accepted as a way of life, not just another restaurant situated on the Walt Disney World property. It’s home to an appealing Polynesian atmosphere, an animated dining area, and an obscene parade of luscious food that could give an Andre the Giant-sized appetite pause. ‘Ohana isn’t for the meek or the miserable, it’s a sweeping playground for drooling carnivores who’ve pulled the safety restrictions off their meat intake valve, or perhaps a place for those who enjoy the kitsch of Hawaii without the burden of a plane ride.

Located inside the renowned Polynesian Resort, ‘Ohana (seated next door to the Kona Café) is a grand family restaurant that’s become one of Walt Disney World’s most popular dining establishments. Open limited hours, ‘Ohana is a tough ticket to come by, necessitating reservations months in advance and demanding further patience in the lobby, as the harried wait staff struggle to open tables up while dealing with the demands of irritated customers. In other words, prepare to wait during every last step of the ‘Ohana process. 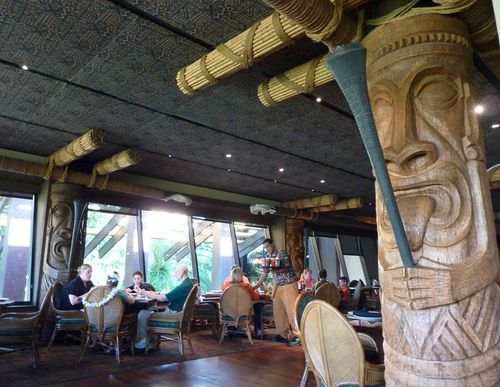 I’m certain ‘Ohana has a menu, but I’ve never seen it. I’m sure ‘Ohana serves breakfast and lunch, but I’ve never bothered to visit during those hours. When I hit ‘Ohana, I hit it hard and only during the dinner rush, when the glorious gastronomic assault, the “Family Feast,” is served. Sure, I’m not exactly a regular (two trips a year max), but I know better than to mess with perfection, and sniffing around the rest of the menu would only detract from the miracle at hand.

This being Disney, ‘Ohana isn’t exactly in the business of supplying precise Hawaiian delicacies to the customer. It’s more of an elaborate feedbag opportunity while sitting amongst tourist décor -- charming stuff that creates a rich sense of cultural intent, but it doesn’t exactly replicate the actual experience. ‘Ohana roughly translates to “family,” and that’s exactly the ambiance the restaurant provides, referring to the customers as “cousins,” with tight seating that has everyone lumped together for the most part, embracing a claustrophobic sense of community as we all ingest an ungodly amount of calories. The family that gains weight together stays together. 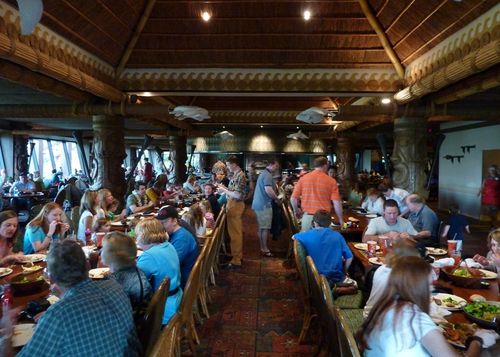 The Family Feast features a roundtable of appetizer choices before the meat machine sparks to life. After a few words of instruction from a beleaguered server (it has to be a tough gig, and I’ve yet to meet an employee that doesn’t look as though they’ve been awake for nine weeks straight), the first few appetizer plates are brought to the table. The customer doesn’t really have a choice here, since the idea of the Family Feast is to hit from all sides, with a bonanza of items to pick from. I’m sure it leads to a frightening amount of food waste, but let’s not focus on the dark side of ‘Ohana business.

For starters, there’s a loaf of coconut “Welcome Bread” that kicks off the evening. If you’re anything like me and view coconut as a mortal enemy, be safe in the knowledge that the bread is actually quite tasty, moist when it wants to be, and generally free of the demonic slimy crunch that accompanies most coconut items. At least when fresh, which isn’t always ‘Ohana’s priority. Next comes a salad, which is a colorful, sweet batch of crisp mixed greens doused with a tangy honey-lime dressing. 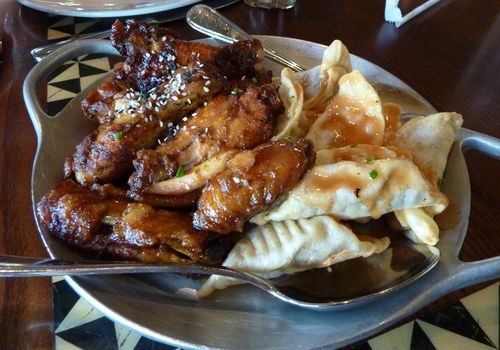 Delicious Honey-Coriander chicken wings soon join the party, sweetening up the meal while reducing all hands involved to a sticky mess of excess glaze. Pork dumplings blasted with sweet and sour sauce also make an appearance. 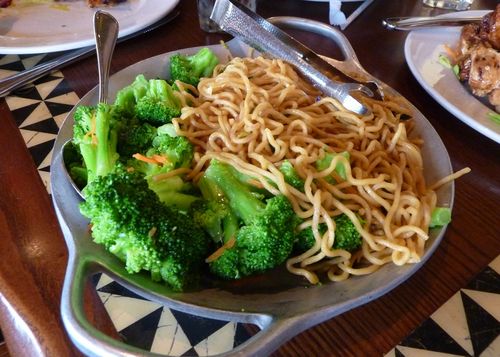 This lo mein plate shouldn’t be anything extraordinary, yet I find myself craving this offering at least once a week. The noodles retain a perfect tenderness and thickness.

Once all of these appetizers are dumped onto the table, the meat carnival begins. The centerpiece of the Family Feast, servers soon buzz around offering portions of pork, steak, turkey, and shrimp, grilled to perfection on ‘Ohana’s station of flame, located in the middle of the restaurant. Cooked kebab-style, prongs of meat are brought to every table and distributed violently, as servers always seem to have some sort of difficulty peeling the meat off the metal poles. See, you receive dinner and a 3-D show. 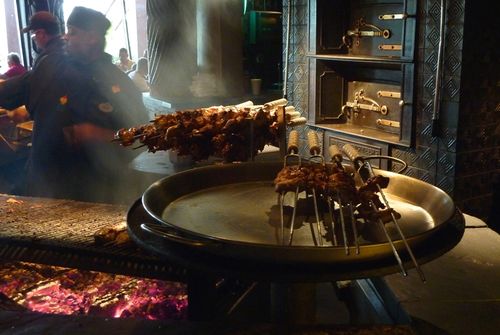 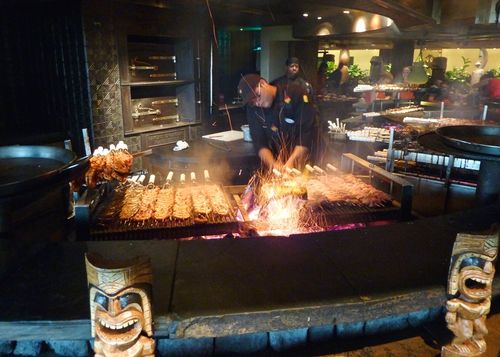 Actually, there is entertainment provided, with a gen-u-ine Hawaiian entertainer stalking the eating area, armed with a ukulele and a cache of heavily rehearsed stories of life on the island. The act is delightful, setting a friendly mood while the customers wolf down their heaps of food. The performers also help to entertain the kiddies with games of coconut-rolling skill, limbo contests, and restaurant parades. It’s a wonderful distraction for the dining floor, permitting sunburnt parents a few moments of solitude before the kids return to the table and continue to drone on about whatever SpongeBob was up to that week.

Back to the meat of the matter: the four offerings are cooked ideally in the flame process, satisfying the fickle grill hound in all of us. The meat rounds can be throttled some with a simple refusal of seconds, thirds, or fifteenths, but I assume most customers like the cram their gullet with a nice layer of crisp animal before leaving, making a comfortable stroll back to the car an impossibility. Some even return to the theme parks, which seems like a form of torture reserved for the worst criminal scum around. Eat here until your eyes bleed and then hit Space Mountain? I can barely make it to the hotel elevators without fingering rosary beads and renouncing food altogether.

Full yet? Because ‘Ohana has one last ace up their sleeve, rolling out dessert in the form of bread pudding, topped off with fluffy ice cream and a creamy banana-caramel sauce. 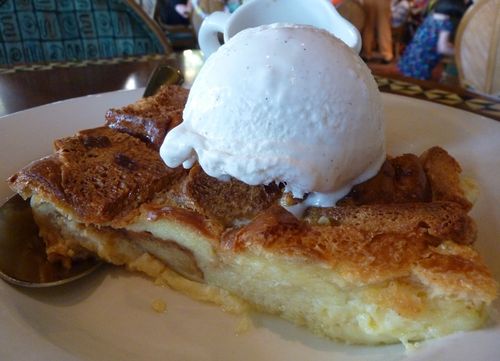 Gadzooks. Thankfully, I’m not a fan of bread pudding, but I could drink a gallon of the sauce without batting an eye, practically daring diabetes to come get me. It’s scrumptious, served with a hearty portion size that proves beyond a shadow of a doubt that ‘Ohana has a sense of humor. It takes a superman (or perhaps a vegetarian) to get past only a few tentative, but magnificent, bites.

A celebration of irresponsible eating, ‘Ohana is a dream; a pure wonderland of flavors and consistency, bundled into a cheeky, comfy Hawaiian experience that pulls customers out of the garish Disney norm and into a homey environment, free of worry and proper caloric judgment. 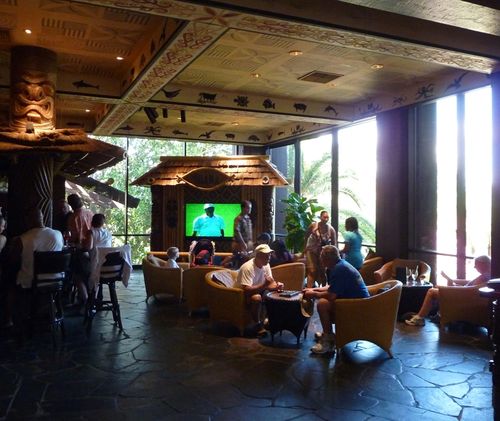 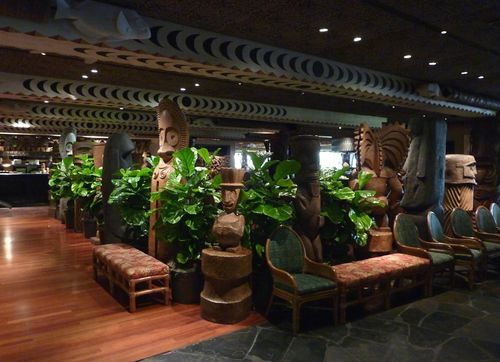 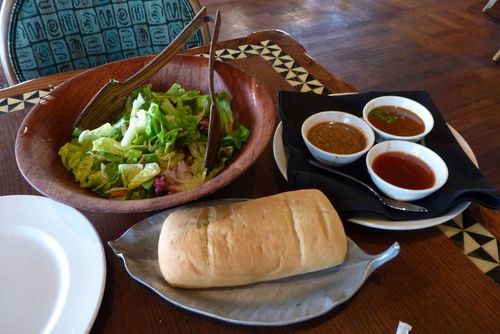 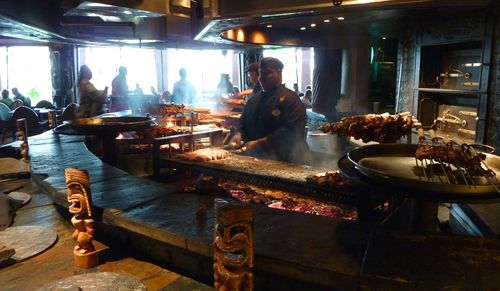 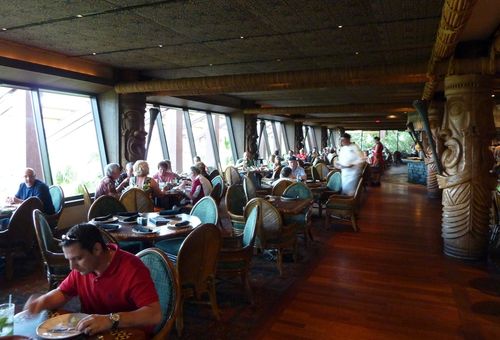 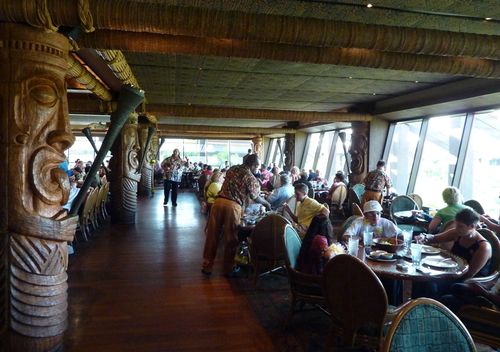 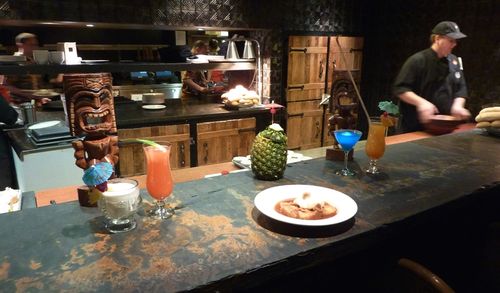 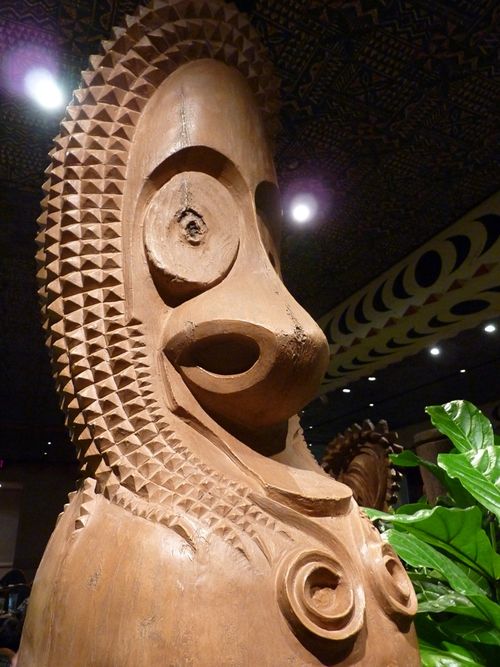 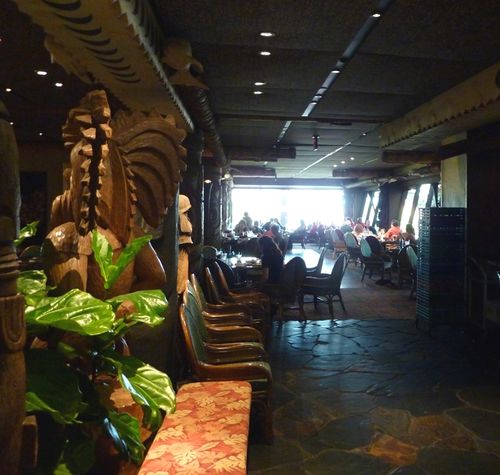 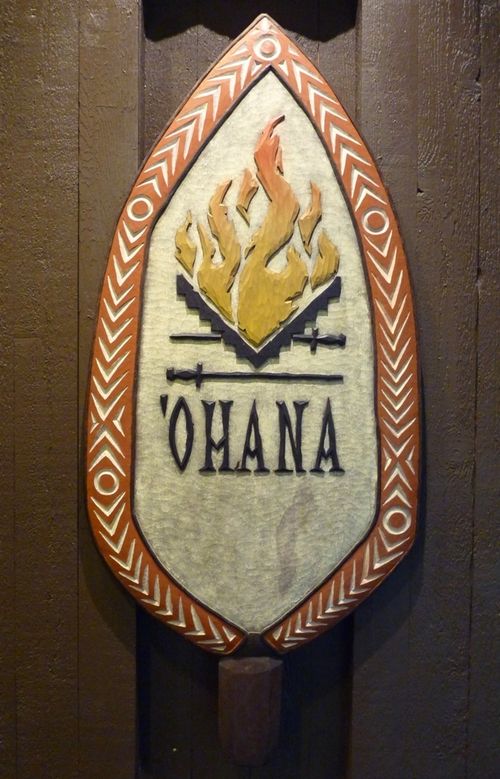 I feel guilty even LOOKING at that picture of bread pudding. That stuff rocks so hard... Thank you for posting this!

'Ohana is like the old potato chip commercial. No one can eat there just once.

PS. If you ask, they'll bring you extra sauce for the bread pudding.

We love 'Ohana! We're invading Disney World yet again June 6-13 and have reservations for a late dinner at 'Ohana on our first night. Perfect way to kick off our stay!