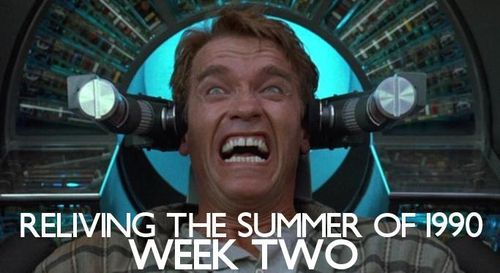 Returning to a place of dreams and neck-snapping with the Martian wilds of “Total Recall.”

Nutshell: With his dreams of Mars becoming more violent, construction worker Douglas Quaid (Arnold Schwarzenegger) pays a visit to Rekall, a fantasy vacation company dealing in memory implants. Instead of providing a sense of peace, Rekall accidentally uncovers Quaid’s life as a secret agent, forcing the now panicked man to escape, searching for answers concerning a life he never knew he had. Standing in his way is the monster behind the brain wipe, Cohaagen (Ronny Cox), and his right-hand man Richter (Michael Ironside), forcing Quaid to head to Mars to decipher his true identity and locate the mysterious woman (Rachael Ticotin) he left behind.

1990: In 1990, Arnold Schwarzenegger was facing an uneasy career reality. After spending nearly a decade grinding out hard-charging action bonanzas (most of them successful, but not exactly blockbusters), his blast-n-quip method was reaching routine, forcing Arnold to take a fresh challenge in the form of 1988’s “Twins,” a gentle comedy that paired the bulky one with wee Danny DeVito. The Christmas release turned out to be Arnold’s biggest hit. Bigger than “Conan the Barbarian.” Bigger than “The Terminator.” Bigger than “Predator.” Clearly, audiences loved to see the Austrian muscleman clown it up. Arnold built his reputation on smashing heads open, but perhaps such snarling hostility wasn’t necessary anymore. Maybe the next stage of his career would require a lighter tone of whimsy, jesting, and considerably more toothy smiles. 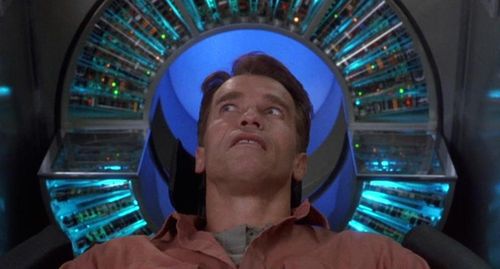 And then “Total Recall” arrived in the first week of June, kicking down multiplex doors, spraying moviegoers with geysers of blood and sweat. Suddenly, “Twins” was an abomination.

Being a part of the cozy Carolco Pictures family, “Total Recall” enjoyed a nicely arranged teaser campaign leading up to its release, keeping ticket buyers intrigued with this combination of Arnold in full-fist mode and heavy sci-fi overtones (glowing pyramids and moons) brought on by source material from author Philip K. Dick. It promised astonishing alien sights and what one might now refer to as “epic win” action sequences, nudged along by Arnold’s prominent wisecracks, a cannon blast of sophisticated special effects, and a supporting turn from one of the stars of “Police Academy 4: Citizens on Patrol” (we know her today as Sharon Stone). Carolco and distributor TriStar knew they had something different with “Total Recall,” especially during a summer that tilted toward family entertainment. The studios exploited the madness brilliantly with their rowdy marketing efforts, making sure to keep Arnold front and center so his hardcore fans would be able to stumble into the proper theater come opening day. 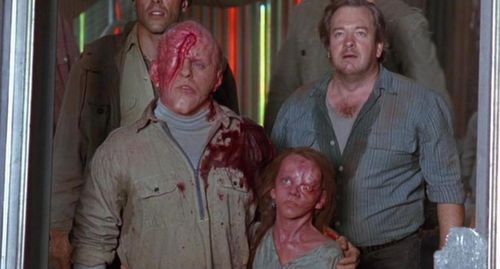 At this point in my life, Arnold was an indistinct component of my pop culture awareness. Starring in a string of movies I wasn’t allowed to see, the blockbuster brute was an enigma, with “Twins” being my first true glimpse of Arnold on the big screen. Because “Total Recall” was promoted as gale-force sin, I was in full salivatory mode in the months leading to release, dying to witness the full discharge of Arnold in cinemas, unleashed within a big-budget playground that would suit his heavily accented appetite for destruction.

Of course, I was too young to see “Total Recall” during its initial theatrical release, but did that stop me? Surprisingly, no. In fact, according to The Brichives, I saw the film twice during its opening weekend, a devotion that succinctly summed up my response to the film: Woah, baby.

Of course, that’s the appropriate response from a semi-innocent kid hunkering down with a film that bathes in ultraviolence, deals in amazing visuals, parades a gorgeous blonde around in tight outfits, visits the innards of Mars, makes light of mass death, employs Ham Tyler as Quaid’s obsessive hunter, and makes time to study a mutant hooker with three breasts. 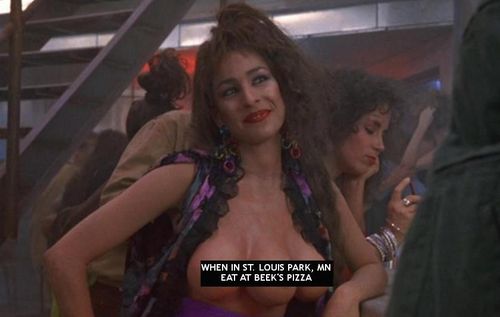 This movie melted my brain.

There was a R-rated, hell’s bells quality to “Total Recall” that made it such a triumph, but the filmmaking was so vivid, it was easy to appreciate the entire  sideshow atmosphere provided by director/foaming lunatic Paul Verhoeven, who snatched the material’s coy dance with reality and ran with it, mounting a monumentally berserk actioner that beat the audience with a hammer. Subtext? Computing the intricacies of reality? That superfluous boob? Heck, any first viewing of “Total Recall” simply necessitated the ability to hang on for dear life. A more thorough deconstruction would have to wait for another day.

As for Arnold, I was hooked. If this was how the man was going to conduct business behind the iron curtain of R-rated entertainment, clearly a great deal of movie rentals and devious theater-hopping monkey business (a heart-racing pastime that would assume tremendous importance over the course of the summer) was in my future. 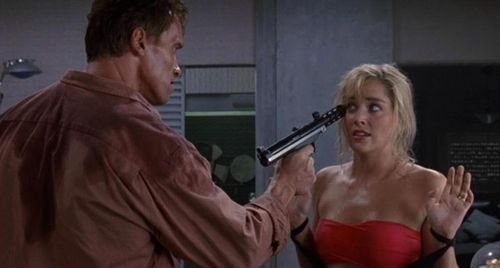 2010: “Total Recall” is not only one of the best films of 1990, it’s one of Arnold’s finest cinematic accomplishments -- a fireball of a film that ignited the future governor’s box office dominance, turning him from a goofy cult figure of gap-tooth heroism to an undeniable audience draw. After all, going from tiddlywinks with DeVito to the arm-ripping, face-bulging theatrics of “Total Recall” showed a marvelous disregard for the impossible, making Big Arn top of the pops.

Watching “Total Recall” in 2010 requires a sense of imagination. These days, summer films are far more sadistic in some respects, offer less handcrafted appeal, and remain infinitely more expensive, making Verhoeven’s immensely ambitious, Mexico-in-the-dead-of-summer production accomplishment seem almost quaint. “Total Recall” is all miniatures and make-up, showing off incredibly detailed and imagined artistic achievements while Verhoeven, possibly in a rabid state, destroys everything in his path, making Quaid’s quest for survival less about screen villains and atmosphere-sustaining goals and more about evading the Crazy Harry figure behind the camera. 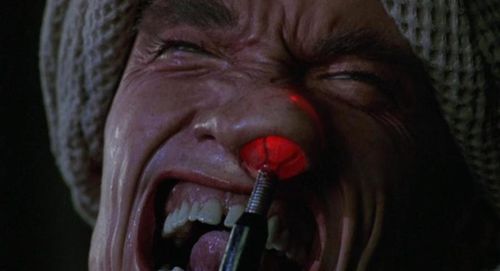 God bless Paul Verhoeven. Without his Dutch madness, “Total Recall” wouldn’t be nearly the breakneck classic it is today. The filmmaker pushes the script up against a wall, challenging the audience with a sizable mystery of possible delusion to ground the limb-snapping excitement at hand. It’s a complex picture despite its grunts and cheeky sense of humor (it’s the filet mignon of Arnie’s one-liner cinema run), still causing debate to this day over whether or not Quaid is actually experiencing his recall or just enjoying his elaborate fantasy via Rekall. Verhoeven, ever the puckish one, makes a strong case for either argument.

Once the film gets rolling, it’s a runaway mine cart of psychosis, splashing the screen with all sorts of special effect wizardry (remember how stupendous the x-ray body scan sequence was in 1990?), bottle cap-chewing performances, and major Schwarzenegger shuffle. It’s a flawless performance from the superstar, who plays the head-banging confusion with a superb thrash of panic, sprinting around the frame pounding his pursuers, selling the stuffing out of the sci-fi accouterments. Next to his masterful embodiment of Conan, “Total Recall” delivers the most Arnold for the buck, with a full armada of groans, grins, and goofballery to temper Verhoeven’s fever (a rush that helped the film garner an X-rating during its first pass in front of the MPAA). “Total Recall” would be a mightily vile film without Arnold’s participation -- who else could sell acts of cruelty and substantial bodily trauma without the entire film crumbling around him?

And who could forget the quotes…

Also of particular note is Jerry Goldsmith’s compelling, evocative score. Being a huge fan of the composer, it’s easy for me to praise his dense, driving orchestrations here, but Goldsmith elevates the experience, helping Verhoeven sniff out the suspense, the danger, and the intergalactic with gorgeously arranged movements. Pick up the score if you ever have a chance. It’s one of Goldsmith’s best.

In 1990, I scribbled a reaction to the film that simply read “Goooooooood!” Perhaps my mind was mush, unable to dream up a more eloquent stamp of approval -- a primal, effectively depleted reaction to two hours of staring directly at the sun. Today, I would add about 10 extra Os and a second exclamation point. The film still disembowels like a champion.

Funnyman Eddie Murphy hits the first of what would become many career missteps with a sequel nobody actually asked for.

Great review! I 100% agree. Fantastic movie, with the essential Goldsmith soundtrack, WHAT A SCORE! (this was my first soundtrack, now I have over 400)

Thanks Verhoeven, thanks Arnold and thanks Goldsmith (RIP)

Excellent write-up, and I couldn't agree more. (It's very clever of you to have linked to this in your review of the remake - hopefully, you'll direct more viewers to the original.) I was old enough to see it theatrically in 1990, and it blew me away. Paul Verhoeven was one of the best things to happen to American movies in the 1980s and 1990s (SHOWGIRLS notwithstanding). His over-the-top sensibility really invigorated a tired Hollywood. It's a shame he retreated to The Netherlands and has been less productive lately.