Because Hollywood is run primarily by knuckleheads and egotists, the powers that be placed two Wyatt Earp stories into the production pipeline at nearly the same time, both racing to be the definitive statement of combustible Wild West mythology, while making an effort to humanize a six-gun icon (already worked over in countless other productions). Released within seven months of each other, “Tombstone” and “Wyatt Earp” endured a showdown of their own, with the arena of volatile box office returns subbing for the O.K. Corral. “Tombstone” barreled into theaters first, positioned smartly by Disney as Christmas counterprogramming (what, you really wanted to see “Sister Act 2?”), brandishing a thundering marketing effort that pushed the film as a rip-roaring throwback western the screen hadn’t enjoyed in a long time. 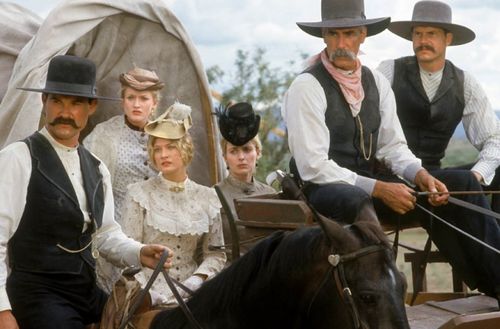 Coming a year after the elegiacal “Unforgiven” rightfully sobered the genre up (while refreshing its profit potential), it makes sense that “Tombstone” was greeted with enthusiastic critical support and a healthy box office gross, eventually squashing “Wyatt Earp” when the multiplex dust settled. However, “Tombstone” always came across to me as undeserving of its success, especially back in 1993, when I originally spent time with the film and openly wondered afterwards just what in the world moviegoers saw in the picture.

Sure, I was a younger, less practiced matinee ranger at the time, but I still found “Tombstone” to be a vastly uneven, needlessly cartoonish, and tedious, reflecting its troubled production and general sweat to be the first Earp film out of the gate. Back then, the film struck me as a colossal mess of chaw-stained mustaches, ghastly dialogue, hokey revenge yelps, and overall disregard for stimulating characterizations. And I came to this disappointing conclusion well before I saw “Wyatt Earp.” In hindsight, I should probably thank “Tombstone” for helping me to appreciate Kasdan’s sensitivity and patience with the material, with his “Earp” clocking in at 190 minutes (nearly four hours if you accept the challenge of the outstanding extended cut of the film), while the George P. Cosmatos picture eats up only two hours.

I’m not itching to make this an arm-wrestling match between “Earp” and “Tombstone.” That would be insanity. Still, I came across both films on cable recently, and while I was immediately sucked in to “Earp” and its pitch-perfect widescreen romanticism, “Tombstone” looked positively alien to me, as I haven’t endured the film since its theatrical release. I figured the time had come to revisit the feature with adult eyes, eager to snatch a new appreciation for the picture and its place in the genre. Thankfully, Disney helped out the reunion by recently issuing a fancy-schmancy Blu-ray to assist in the visual department.

Turns out, it takes a lot more than the passage of time to value “Tombstone.” Naps, earplugs, and possibly tremendous amounts of alcohol also assist in the proper digestion of the feature.

The classic gunslinger posture of “Tombstone” is not lost on me, with the production taking inspiration from the great westerns of yore, assembling a cast of hearty men spitting tobacco everywhere, while the womenfolk pester, tempt, and cower, leaving room for the good guys to blast away at the bad guys. It’s an old-fashioned framework of snarling white hats and black hats that “Unforgiven” effectively disrupted, but “Tombstone” was determined to use the Earp story as a means to restore classic cowpoke cacophony, returning the genre back to the basics of poker faces, mining towns, and grudges. The opening narration from Robert Mitchum sets the pulpy tone of the piece wonderfully, getting the film’s point across with minimal hustle. I’ve never questioned the intent of “Tombstone,” only its slapdash execution.

Needlessly sloppy and dramatically skeletal, “Tombstone” is a comic book encounter, not a feature film. I suppose the appeal of the picture lies in its Crayola construction, a two-fisted broadness that moviegoers can easily sink their teeth into. It’s determined Old West escapism, but whoever actually directed this picture (George P. Cosmatos is officially credited, but star Kurt Russell recently admitted he ran the troubled shoot after original director Kevin Jarre was fired) wasn’t interested in anything more than a primary colored spur-jangling soap opera. The plainness of emotion grates almost immediately, as does the cartoonish costume design and laziness of the production (Brooklyn native Paul Ben-Victor is actually painted brown to portray a Mexican bandito), adding up to a dreary routine of the obvious, dusted with often random flashes of violence to sufficiently butch it up.

“Tombstone” is clumsy and clearly patched together in haste, with characters strolling in and out of the picture with more on their mind than the final product allows them to communicate. Disney shaved this one down to primitive revenge picture ingredients, making the hysterics of brotherhood and villainy unproductive, handed to a cast of hammy, hungry icons and semi-stars (including Thomas Haden Church, Billy Bob Thornton, Stephen Lang, Terry O’Quinn, John Corbett, Michael Biehn, Billy Zane, Powers Boothe, Bill Paxton, Jason Priestley, Charlton Heston, Michael Rooker, Sam Elliot, and even Frank Stallone) left alone to deduce motivation, while Russell gnashes his teeth and spews corny lines even he doesn’t appear to believe in. This is no knock on the one and only Snake Plissken, as he’s a marvelous actor with a special screen charisma. However, Russell is no match for an apathetically told story that seems in a hurry to burn through the basics of the Earp saga, most pointedly showcased in the lawman’s abrupt dalliance with cheerless stage performer Josephine (Dana Delany) -- a leaden subplot so incomplete, I wonder why the studio even bothered to leave it in.

As for the celebrated turn from Val Kilmer as quippy killer Doc Holiday, it’s a scenery-chewing, tongue-twirling performance that’s as superficial as the rest of the picture, but at least Kilmer appears to be having fun. It’s more than I can say for the rest of the listless cast.

While certainly bulky, Kasdan’s film sought to deconstruct the Earp myth, portraying the squinty man as a vulnerable human being hardened by the tragedies of his life. “Tombstone” is cheap zoetrope experience, providing basic cowboy goods without much continuity. It’s a glorified chapter of a lousy serial, and while I understand the hunger for brainless slabs of western conflict, I can’t believe, nearly two decades later, that this is the film most people regard as the definitive 1990s take on Wyatt Earp.

I just saw this movie the other day for the first time and you hit the nail on the head with this review. I have to admit, I loved Val Kilmer's character, but that was the only thing about the movie that stood out to me. When you mentioned Disney, a whole lot of pieces fell into place, as I was expecting to watch a thrilling and dramatic movie, and instead got a flat, flavorless, family friendly film.

From their poor reviews I'm guessing that Brian and Rob must have been drinking "tremendous amounts of alcohol" as they were watching Tombstone. That would explain their miserable reviews.

The acting by all the cast was excellent and Kurt Russell (as Wyatt Earp) and Val Kilmer (as Doc Holiday) was simply outstanding.

Tombstone has something for everybody. It offers fast, action packed shoot-outs, good versus evil, and a touch of romance (but not too much, this isn't a love story).

I loved this movie. I've seen it three times and I'm ready to see it again. If you love a good western then I recommend this movie for you.