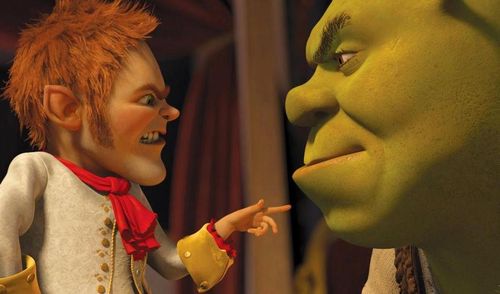 It’s been nearly a decade since the release of the original “Shrek.” A monster hit with audiences eager to watch the fine art of Disney fairy tale storytelling receive a vigorous spanking, “Shrek” hit a nerve that carried over to an even more successful 2004 sequel, and a less admired 2007 installment. “Shrek Forever After” (a.k.a. “Shrek: The Final Chapter,” or whatever Dreamworks happens to be calling it this week) promises a last dance for the profitable ogre, and while it’s a modest affair that barely exerts itself, it’s a charming, humorous closer that reunites the viewer with old pals in an extremely agreeable fashion.

Now a father, husband, and beloved community icon, Shrek (voiced by Mike Myers) has grown weary of the grinding routine, fondly recalling the days when he was a feared monster, left alone to take care of ogre business. Hearing the call is the wicked Rumpelstiltskin (Walt Dohrn, an animation producer turned thick-tongued actor), who presents Shrek with a shady contract offering to reset his life for a single day, taking the green guy back to the basics. Happily accepting the deal, Shrek is soon swept away to an alternate universe where he never saved Fiona (Cameron Diaz), never befriended Donkey (Eddie Murphy), and never encountered Puss in Boots (Antonio Banderas), while Rumpelstiltskin has assumed control of Far Far Away, ordering his witch army to patrol the land. Realizing the gravity of his mistake, Shrek races to romance Fiona, now a warrior queen of an ogre rebellion, hoping to reverse the contract and return to the happy life he took for granted.

It’s been interesting to watch the “Shrek” features slowly slink away from the one-joke premise of the original picture. After all the unfunny Disney potshots were exhausted, the sequels required the producers to head inward, developing a community of “Shrek” players capable of standing on their own, without the crutch of mockery. Perhaps this places me in the minority, but this expansion of the Far Far Away playland created a pair of infinitely more appealing sequels, two films that inched away from shtick into something with a moderate amount of substance, along with gentle acceleration of grounded humor -- more situational than satiric. Suddenly “Shrek” had a universe and a willingness to play loosely with its extensive fairy tale teasing.

“Shrek Forever After” snuggles into the heart of the film series, forgoing an epic killing blow to play gently once again, which might leave “Shrek” devotees slightly disappointed that the franchise isn’t packing bigger guns for its swan song. The emphasis here is character and how Shrek mistakenly views his nonstop domestic obligation as a loss of purpose, fearing he’s abandoned his true nature. It’s an introspective arc for the ogre (watch as all the fathers in the audience shuffle uncomfortably in their seats), which supplies the picture with a “very special episode” television feel. However, for a series that’s prided itself on junk food jesting, I welcome any and all modesty, sticking with bouncy personalities that have found appealing, playful niches over the course of four movies.

Getting the film to sufficient big screen heights is the addition of 3-D, which director Mike Mitchell (“Deuce Bigelow: Male Gigolo”) employs well during the film’s multiple chase sequences and a showstopper that finds Shrek zipping around Rumpelstiltskin’s castle on a witch’s flying broom, gloriously smashing the place up in the process. Spectacle may be in short supply, but the production knows to stick close to Shrek and his pals, with time allotted to Fiona, Donkey, and Puss in their screwy alt-reality appearances, the best of which finds the heroic cat in a state of kitty obesity, taking kindly to the life of leisure. Banderas steals the film as Puss, throwing uproarious vocal purr into a brief supporting role, capturing the necessary madness to the “Shrek” series with nary a wink. The screenplay is quick to repeat a few key running gags from the franchise, but the peppy voice work here sustains what’s left of the freshness, or at least furthers known elements with pleasure.

“Shrek Forever After” brings along a warring band of ogres (including John Hamm and Craig Robinson), showcases musical villainy from the Pied Piper (employing a surprising use of “Flute Loop” by the Beastie Boys), and yes, serves up waffles. However, at the center of this picture lies an appreciation for friends and family -- a sincerity that gives the film an unexpected heart to make up for the diluted big screen heroics. It’s not a dynamic sequel by any means, and perhaps purists will scoff at the timidity of the writing, but I feel these “Shrek” films have developed into something greater than simple free-throw mockery, finding a core of cartoon personality that’s created a colorful, silly, and occasionally inventive neighborhood of comedy. 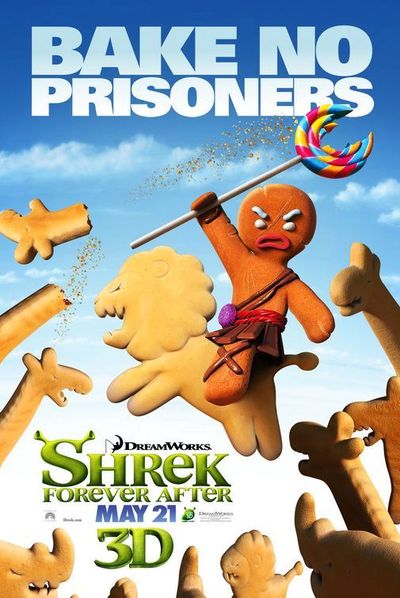