Film Review - Sex and the City 2 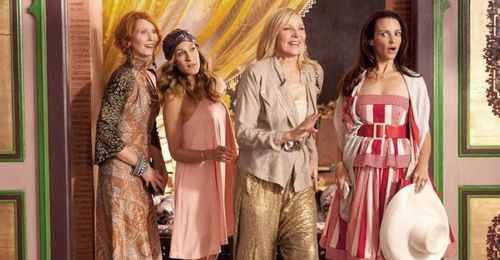 Ah yes, “Sex and the City 2.” It’s the high fashion, glass-clinking instruction booklet for life as a successful woman, catering to the needs of the staunchly female audience by presenting male choirs, erect penises, Helen Reddy karaoke, “Mommie Dearest” costuming, and a cameo by Liza Minnelli. Hey, wait a minute! I suspect nothing about “Sex and the City 2” directly concerns the same heterosexual high kick the adored television series celebrated; this sequel makes “The Adventures of Priscilla, Queen of the Desert” look like “The Remains of the Day.”

Two years later, and it appears Carrie (Sarah Jessica Parker) and Mr. Big (Chris Noth) have hit a rough patch in their marriage, with the tactless writer wanting more to life than peaceful, reliable domesticity, agonized that her husband would rather spend time with his new HD television than with his jewelry-demanding shrew of a wife. Coming to her aid are pals Charlotte (Kristin Davis), currently suffering the mommy blues when she finds out her nanny (an aptly cast Alice Eve) is too attractive; Miranda (Cynthia Nixon), struggling with her male-dominated workplace; and Samantha (Kim Cattrall), who’s now facing the ravages of menopause. Together they bond over clothes, booze, shoes, vaginal moisturizer, and a random trip to Abu Dhabi, where the girls spend their evenings bonding like the lifelong BFFs they are, and their days cheerfully urinating all over sacred Muslim culture.

“Sex and the City 2” is an atrocious motion picture. I know, coming from a male (gasp!) film critic (double gasp!), a statement that severe doesn’t suggest a particularly sensitive point of view, but I implore those with even a modicum of multiplex hesitation to see something else, spend a moment with family, or pledge time to a charity. There’s has to be a better way to blow your precious moments on this earth than with something as brazenly vile and hateful as this sequel. Just what in the hell was the production thinking?

2008’s “Sex and the City” feature film wasn’t exactly a walk in the park either, yet the smash hit held tight to the tenets of the HBO series, giving fans a bedazzled big screen adventure to sate their Carrie needs. The sequel, tossed together in a hurry, doesn’t bother furthering the established flow, instead flinging itself into the outer reaches of farce, melodrama, and camp. Open-mouthed and airheaded, “City 2” is an unmitigated disaster, showering the frame with garish costume design and dreamy far off lands to cover for the obvious void on display. Perhaps writer/director Michael Patrick King was distracted by all of the shiny things on set, as “City 2” is the work of a man who clearly abandoned his senses. It’s a foolish, angry picture, and one that bares its fangs without reason.

Sure, it kicks off with a certain spring to its step: Charlotte facing the ample swinging breasts of her live-in help, Samantha furiously trying to hold off the inevitability of maturation with pills, and Carrie finding the routine of marriage crippling to her sense of romance -- to her, a man who brings home high-end Japanese take-out is no man at all. Miranda? Her glass ceiling woes have far too much real world application to be handed more than a few beats of screentime. The troubles are expectedly absurd and the performances predictably shrill, but King only dips a toe into the NYC situation, preferring to stick around for some red carpet horrors and a few lunches before it’s off to the United Arab Emirates, unleashing the horrible foursome on the unsuspecting, repressive Muslim world.

Pulling the gang out of New York City should’ve inspired King to develop the “City 2” universe beyond the routine of broads and Blahniks, placing our heroines in a harsh alien land, with little protection from the foreign sun outside of the clothes on their backs. Instead, King cranks up the dreary fashion show mentality to a higher decibel, portraying the foursome as dimwitted American ghouls stomping around Abu Dhabi cracking jokes about burqas and openly mocking the extremes of Muslim law. It would be the ballsiest material of the year if it weren’t so ugly and needlessly raw, revealing a pus-filled mean streak to King that I don’t think anyone could’ve expected. I’m all for farce and a ribald sense of humor, but the script here is cruel, not only to the Middle East, but also to audiences forced to endure the sight of a grown woman wearing humongous metal spikes for shoulder pads. King attempts to soften the blow late in the movie by bending the gang’s bile into pure girl power, but the damage is done, the eyesore outfits aplenty, and, for some reason, actor John Corbett is prodded into this mess to make Carrie’s life a waking nightmare of simplistic decision, positioned between her creepy husband and her creepy ex-boyfriend Aiden.

The kicker here? It takes 145 minutes to sort out this hurricane of obvious. And King makes you feel every last crawling second of this beast by piping in the puns (Samantha is looking for a man to be her “Lawrence of my labia”), making fetch happen through the reoccurring use of the term “Interfriendtion,” and staging a Lucyesque finale that finds the gals slipping into burqas to escape the wrath of the Abu Dhabi locals.

Diluted is the cosmo-fueled girl talk, the lovesick blues, and the polite haute couture bludgeoning. “Sex and the City 2” places a brick on the gas pedal and drives the franchise over a cliff, assuming what the fanbase wanted this whole time was to see their beloved series squatted down into an appallingly xenophobic drag show. 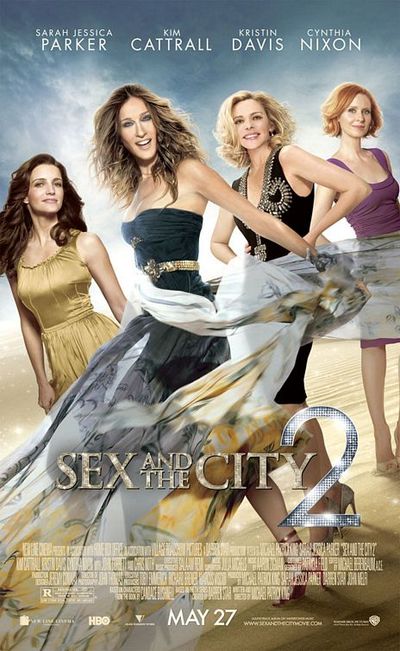 Of course you hate it. You're a man! You don't understand anything about women.

Oh this review is such bullshit. how dare some jerk judge this wonderful movie. i saw it last night with my girlfriends and we laughed the whole time. quit being so sensitive and male. you bug me.

Funny, you wouldn't know it by reading the comments here, but a lot of the female film critics hated it too. Maybe, just maybe, not having a vagina isn't the author's problem here, it's having an IQ higher than 45 that's preventing them from grasping the esoteric joys of the film.

Funny, the girls play the same gender card in the movie to deflect responsibility.

"The critic didn't like my book because he's a man!"
"My boss hates me because I'm a woman!"

Yes, these movies aren't made for the penis-equipped. But can't we men be predisposed to hating the movie...which also happens to be a steaming pile of crap? Why can't it be both?

Totally agree with the last two posts here. As a woman, this picture infuriated me even more! I would gladly trade sexes if being a woman in this Sex in the City world means that I travel half-way around the world to buy shoes, crap all over another culture without understanding it, communicate with other women of said culture only by fashion and praise the freedoms of this county because they allow me to have sex in public. Some person saw this movie with their girlfriends and had fun and laughed? What?! Really?

This review was WAY too kind. I'm all for a fun movie about fashion and friends, but this picture was hateful and so offensive to not only women but Americans. Ugh. All I can be is ashamed of these 4 women and anyone else associated with putting this picture together.

Anyone who goes to Sex and the City 2 expecting a thoughtful and sensitive portrayal of Arab-Muslim culture is about as stupid as someone who would go see a Tyler Perry film expecting to see an intelligent and balanced depiction of contemporary African-American life. Really, I have to laugh at how this movie seems to be giving the critics aneurysms. The television show was about four privileged women in Manhattan with no real problems enjoying the high-life. It had some charm and wit, but it was pretty thin gruel to make a TV show out of, let alone a feature-length movie. Sex and the City was meant to be escapist fun and nothing more. The first film proved that trying to make a "serious" film out of the tv franchise was terribly misguided, so I suppose the writers decided the best route for the sequel was to create a self-parody and amp up the outrageousness. Does anyone truly think that the movie is meant to be taken seriously, either as a feminist critique or a cross-cultural study? If they do, they need their heads examined. It's fluff, harmless and insubstantial, and soon forgotten. To say the film is vapid and shallow is to miss the point. If you want something intellectually challenging, read a good book. If you just want to enjoy a bit of light, mindless entertainment for a couple of hours, see this film. It's certainly no worse than the typical Hollywood film, and it is probably more amusing than most.