Film Review - Prince of Persia: The Sands of Time Unlike many features inspired by the world of video games, “Prince of Persia: The Sands of Time” emerges from an extensive history of electronic adventuring. While directly funneled from a 2003 console release, “Prince of Persia” has been a leaping legacy of gaming since 1989, making it an ideal fit for a widescreen cinematic adaptation. However, the premise found its way into the sticky hands of producer Jerry Bruckheimer, who does what he habitually does to PG-13 action entertainment: makes it plastic, noisy, and easily dismissible.

An orphaned child adopted by a Persian king, Dastan (Jake Gyllenhaal) has grown to become a fierce warrior, leading the charge to topple a neighboring kingdom suspected of underground arms dealing. Coming across an extraordinary dagger, Dastan learns the weapon is capable of rewinding time, fueled by magical sand. Soon framed for the murder of his father, Dastan escapes capture with the aid of Tamnia (Gemma Arterton), a princess and rightful guardian of the dagger. Speeding off into the desert to prove his innocence, Dastan comes across a scoundrel (Alfred Molina), seeks help from his uncle (Ben Kingsley), and attempts to elude a group of mystical killers known as Hassansins, out to steal the dagger. 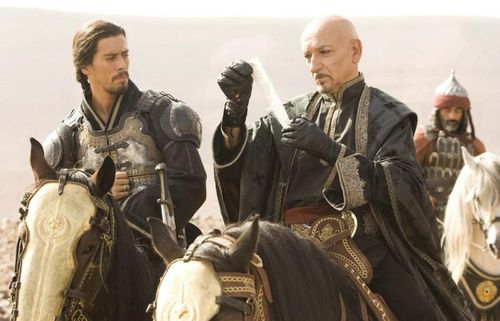 Aiming to inflate itself into a massive summer blockbuster (while retaining a pronounced Iraq War allegorical coating), “Sands of Time” ends up choking itself out, spending too much time on the labor and not enough on the back-flipping thrills. The film endured two years of post-production tinkering, and frankly it looks like a movie heavily reordered and glazed while awaiting release, dealing more in screen chaos than I’m sure director Mike Newell originally intended. “Sands of Time” is overthought, overscripted, and overcooked, stripped of the matinee joy it so clearly wants to share. Instead, the final product is a rickety roller coaster, slowed down by its rusted mechanics and dependence on artificial stimulation.

Surprisingly affable is Gyllenhaal, who doesn’t immediately spring to mind when casting a buff, shaggy, agile hero, quick with swords and always ready to pounce. While fitted for an awkward British accent, the actor makes for an appealing protagonist, selling the stuffing out of the extensive stunt work (eventually chopped to bits by the dreadful, senseless editing) and the supernatural elements of the story, keeping the audience invested in the intricate details of momentary time travel. Gyllenhaal banters well with the lovely, commanding Arterton, even when the script hoists some abysmal romantic chatter on the two, and he does what he can to delay the film’s hostile spirit. It’s a commendable performance wasted on a sludgy filmmaking effort. 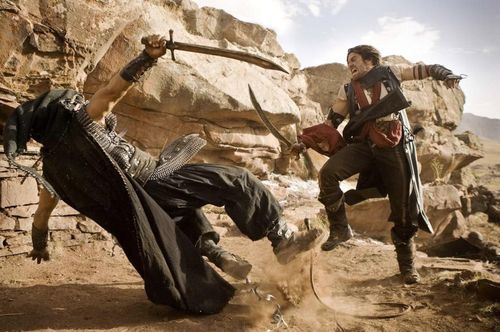 Not only is there a time-splitting dagger, a princess, regicide, and family suspicion splintering the focus of “Sands of Time,” there’s also an entire subplot covering a massive swell of time travel energy, appearances by a slovenly ostrich-loving opportunist (played predictability by Molina), and this whole business with the goofily branded Hassansins, who travel via sand tornado, using CG snakes and spikes to kill their prey. The film isn’t a light jaunt, but an exposition drag, with a good chunk of the film devoted to the explanation of explanations, a prospect further dampened by some uninspired casting in the support department -- it feels criminal to even suggest it, but casting Ben Kingsley in anything these days reeks of laziness.

Watching Dastan fly through the air with his parkour-aided moves is a real kick, but eventually the film solidifies into a wall of noise, with all sorts of visual and aural business competing for screentime, scraping the natural energy out of the picture. It’s a sickness partial to Bruckheimer pictures, which usually feel the need to overcompensate to give the paying customers their money’s worth. “Sands of Time” needed a lighter touch, a more practical feel (the film is dominated by iffy greenscreen work), and an editor with a sense of rhythm. Instead, the feature is nothing more than a jumble of spectacle demanding oohs and aahs from the battered audience.