Romantic motion pictures tend to cheat, fudging screenplays to evoke intimacy faster, helping along cinematic pace and the ways of love for audiences typically impatient with matters of the heart. “Letters to Juliet” is no different, yet its reduction in reason is rather mean-spirited and, even for a gushy screen romance, blatantly illogical. While forever gentle and warmly acted, “Juliet” sends a confusing message about the blinders of love, speeding into an idealized pairing it doesn’t earn.

A frustrated magazine fact checker, Sophie (Amanda Seyfried) is looking forward to her “pre-honeymoon” trip to Italy with her master chef fiancé, Victor (Gael Garcia Bernal). Upon arrival, Victor becomes caught up in the flavors of the country, taking off on Sophie to chase exclusive recipes and rare wine. Sophie, trying to drum up her own adventures, visits the Juliet Capulet home in Verona, where heartbroken women from all over the world visit, placing their scribbled confessions on a sacred wall, quickly harvested by a group of locals, committed to keeping the fantasy alive through written response. Joining the gang, Sophie selects a hidden letter from 1957, sending encouragement to Claire (Vanessa Redgrave), who was forced to leave her true love decades ago. Responding immediately, Claire and grandson Charlie (Christopher Egan) arrive in Verona to find the one that got away, with Sophie tagging along to write a story about the Italian countryside hunt. 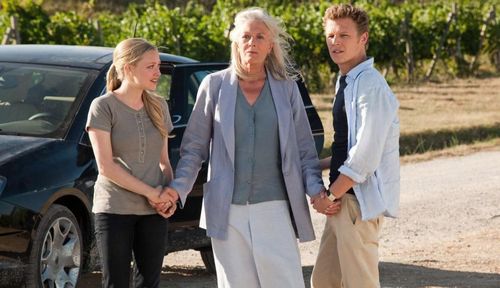 “Letters to Juliet” can be an infuriating film, but it also retains a few spots of loveliness, provided by the likes of Redgrave and Seyfried, who have a way of overcoming the material to communicate some faint sense of humanity to this plastic creation. Redgrave especially scores as the regretful grandmother, charmingly summoning twinges of hope and embarrassment as the team inches closer to finding the mystery man. In fact, Claire’s search is the only reason to stay invested in the story, as her tale sustains a pitch of endearing sweetness throughout the film, making Gary Winick’s sloppy direction seem almost elegant and heartfelt. Claire getting back in touch with her aborted past is a beautiful note of longing that injects the picture with something emotionally substantial. Seeing Sophie booted out of the film would’ve been just fine, since Claire’s arc is the only thing in the picture resembling the actions of a living, breathing human being.

As you might’ve guessed, Sophie’s a conflicted character. About to be married to a man who takes his professional obligations very seriously, Sophie feels ignored in Italy. And what do young women do in a foreign land with their men away attempting to build a stable, responsible future? They cheat! Or at least feel the urge to. She’s not exactly a wicked thing, but the screenplay is situated to make sure Sophie and Charlie fall in love while carrying out Claire’s quest. The problem is, there’s no connection made between the characters, they barely have any substantial interaction, and their attraction never overcomes its purpose as a shameless storytelling conceit. Even by the genre’s standards, Sophie and Charlie are a still strangers by the time Winick needs them to smooch and alter massive life plans. As much as I appreciate Seyfried’s natural bright-eyed screen charisma, once the plot swerves into indecisive heart country, the film dies. 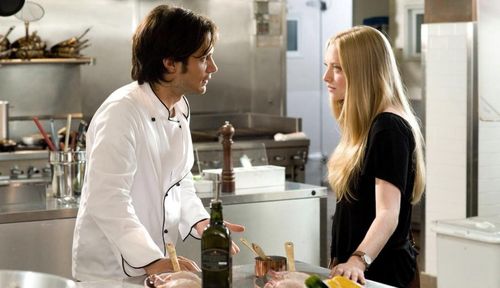 Treated with equal absurdity is Victor, who’s characterized as passionate, hard working, and loyal. He’s Spanish and good looking too. What a creep! Besides wasting Bernal’s time on an astoundingly thankless role, the character is treated rather cruelly to fit into Sophie’s dreamland of affection, tossed away like garbage once something better comes along. The screenplay cuts too many corners for any of this to make sense, leaving Winick to douse the picture with glitter, tears, and a wedding to fog the fact that “Letters to Juliet” is tremendously bored with its own characters and situations.

While not a messy film, “Letters to Juliet” is persistently hollow, diving into a dopey rom-com conclusion (with cutesy Shakespearean overtones) that merely confirms the insipid direction at hand. There’s at least one-half of a true love tale that clicks superbly, but it requires time spent with the other half of the film, where the necessities of the genre squash the possibility of the premise, pandering sloppily without planning ahead.