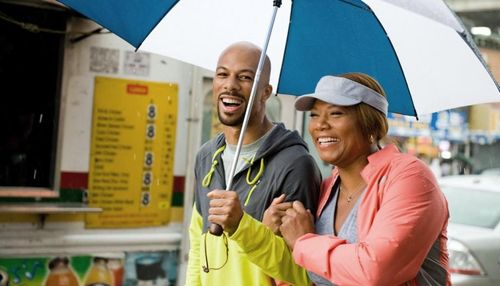 Showing more pearly whites here than in any of her previous efforts, Queen Latifah appears determined to make her latest film, the romantic comedy “Just Wright,” work for every single audience member. It’s admirable to mold something PG and mellow, with a sense of musical culture to it that typically isn’t allowed in the genre; however, it doesn’t take long before mental illness sets in, crippling the film with cliché to make the dramatic pieces fit in a manner that doesn’t disrupt the inevitability of the cartoon writing. Yet, Latifah keeps smiling away, hoping her natural charisma will be enough to cover the fact that “Just Wright” is woefully undercooked and often insultingly moronic.

Physical therapist Leslie Wright (Queen Latifah) is unlucky in love, watching as her “godsister” Morgan (Paula Patton) snatches up all the men, using her good looks to snag a basketball player for a husband. Meeting New Jersey Nets star Scott McKnight (Common) by chance at a gas station, Leslie is smitten; however, Morgan swoops in and takes Scott away, eventually becoming his fiancée, leaving Leslie to move along dejectedly. When Scott is faced with a possible career-ending injury, Leslie is hired to rehabilitate the depressed athlete. The two soon forming a deep friendship, which soon blossoms into love, leaving the ball player stuck between the perks of a trophy wife and the comfort of his soulmate. 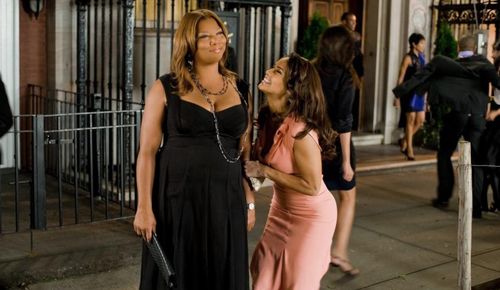 It’s somewhat surprising to find director Sanaa Hamri back in charge of an affectionate film, after her slack work with “The Sisterhood of the Traveling Pants 2” and “Something New.” Showing little aptitude for the process of cinematic love, Hamri predictably fumbles the sensitive particulars of the story, twisting this tepid game of love into an unexpectedly arcane, frosty viewing experience that doesn’t show much understanding for the lead characters. “Just Wright” isn’t an appalling picture, just all too eager to please, while every new development in the script feels like an anvil tied to the film’s sense of joy.

While screenwriter Michael Elliot has a firm grasp of the basketball groupie world that Morgan runs in, the needed steps to attraction and bonding between Morgan and Scott are never felt, making their union come across as one of mutual opportunity, not love. While the hooker mentality is sharply played by Patton, the character is a high-heeled predator that’s never fully fleshed out, ridiculously redeployed in the final act to disrupt Leslie’s burgeoning happiness with the basketball god (only to be made a saint in the end). The same goes for Scott, who can’t seem to experience life beyond the demands of his penis. The writing attempts to dreamboat him up with a preference for jazz and pleasant social manners, but the film, perhaps unintentionally, makes him out to be an indecisive stooge who openly disrespects Leslie so Hamri will have her precious break-up-to-make-up ending to keep the toxic formula flowing. 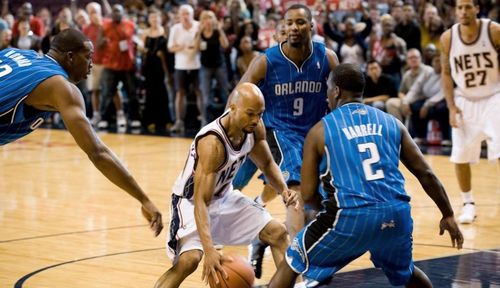 Common’s performance as Scott also lends the film a few more unintended question marks. This being his first starring role, the musician is eyeing a certain twitch of gullibility with the character, slowing down his speech, staring at his co-stars, and perching himself uncomfortably around the frame. It’s a bizarre piece of acting that infuses Scott with the aura of a serial killer, leaving the impression that the character doesn’t just want to make love to these ladies, but perhaps wear their skin as a suit in his basement as well (cue “Goodbye Horses”). Common makes “Just Wright” uncomfortable and awkward, despite his ideal physicality for the part. He’s not an actor, he’s a disturbingly practiced smile slapped on some sweaty muscles.

Queen Latifah fares better in the lead role, though her brand of sunshine grows tiring by the end of the picture, which has Leslie afflicted with some type of brain disease that forces the character to remain in love with Scott despite his clear disinterest in fidelity. “Just Wright” is barely directed, wastes the talents of Pam Grier and Phylicia Rashad (here in parental roles), and walks that narrow line between gooey wish-fulfillment romanticism and airhead misogyny. No amount of beaming and post-coital bed dances from Latifah can save this comatose, bewildering bore of a film.