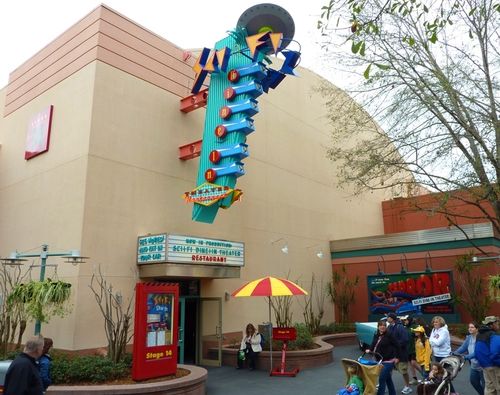 In February, I was coerced into celebrating a dark, impossibly depressing event that I’ve come to anticipate with all the hand-trembling, teeth-grinding joyfulness of tax day: my birthday. Barf. To help digest such a bleak occasion, I made a choice to visit one of my favorite Walt Disney World restaurants, The Sci-Fi Dine-In Theater, located at Disney’s Hollywood Studios. It’s not an establishment known for its killer culinary lavishness, but solely for its spirited ambiance, and on a day like that day, I needed all the simulated enchantment I could seize. To me, the Sci-Fi Dine-In Theater is a home away from home.

The concept of the restaurant is to whoosh bewildered customers back to the 1950s, with the building housing a massive recreation of an idyllic drive-in movie theater, complete with a sea of automobiles and a starry night sky. It’s a charming idea for family dining, but absolute catnip to movie fans, who receive a golden opportunity to huff some retro exhibition fumes with this distinctive idea for an eatery. I recall my mind being blown by the joint during my first visit in the 1990s, completely steamrolled by the finely nuanced visual kitsch that surrounds the customer, also tickled by the idea of watching movies while eating American cuisine. You mean there’s no meandering dinner table small talk? Sold! 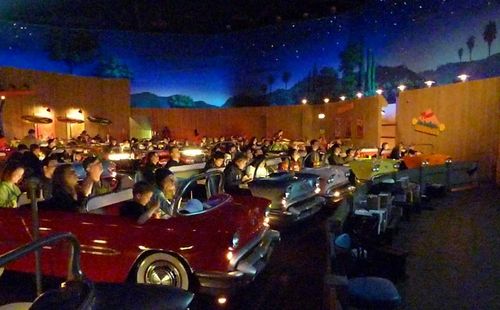 Once in the door, the customer is offered a few choices in seating: a “Flying Saucer” table-style arrangement in the back of the room, or a car-style booth (complete with speaker) which directs attention solely toward the screen. The cars are somewhat snug, but they encourage the drive-in atmosphere delightfully, further cemented by the wait staff, who bop around dressed as carhops, some boasting explosive “character” personalities to help drive the experience. The servers needle and joke around, doing whatever they can to break the ice and persuade tourists to kick back and enjoy the environment.

What’s actually projected on the big screen? Well, Disney fashioned a nice reel of Atomic Age cartoons, educational films, and trailers back in 1989, and they haven’t bothered to change it since. The presentation is crammed with comedic displays of futurism and reminders of the Ed Wood schlock era, forming a dripping sensation of B-movie heaven when projected in the room for all to see. It’s fun stuff, especially with a few randy drive-in bulletins thrown in to sell the fogged-windshield fantasy (though considering all the kids running around, most couples are way past that point). 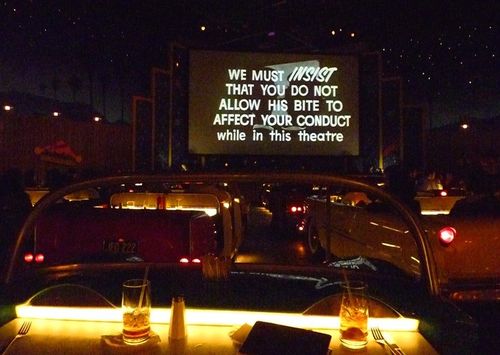 My only complaint is the brevity of the reel, which cycles through in a hurry, especially if your food order suffers any sort of delay. Like many others, I’ve held out hope that Disney would get in there and assemble another reel of fresh material, with a considerably longer length. Sadly, it’ll never happen. Disney likes to collect pennies, not spend them. Besides, I’m sure the shortness of the loop is a corporate ploy to get customers up and out in a hurry, or else they might be subjected to the same “Horror of Party Beach” trailer, gasp, twice during a visit.

There are automobiles, movies, stars, carhops, and incredible darkness for a restaurant interior. So what’s missing? Food.

One doesn’t stroll into the Dine-In for the diverse eats, lemme tell ya. Befitting the drive-in theme, the menu is extremely limited to a standard selection of burgers, sandwiches, and pasta. The chow isn’t challenging, but hitting the Dine-In just to munch is missing the point of the experience. For what it’s worth, the food is fine for a Mouse House distraction, offering tasty simplicity to families eager to sit down with grub that meets them halfway. For this visit, my dining companion ordered the Smoked Turkey Sandwich, while I devoured the Angus Chuck Burger -- two painless, flavorful menu items that offered hearty portions and insanely salted fries to panic ye old circulatory system. 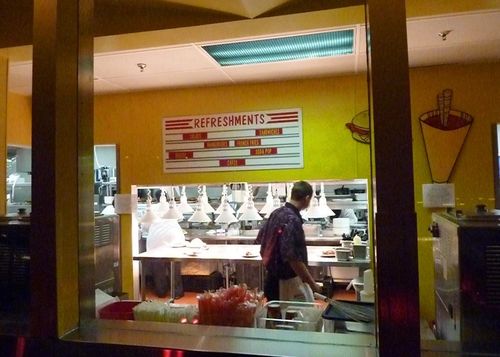 Secretly, just between you and me, I treasure the flavored drinks at Dine-In the most, where the reputation of fountain Diet Coke meets the sticky-fingered sorcery of grenadine syrup. Hey, it’s the small pleasures that make life bearable, right?

The Sci-Fi Dine-In Theater isn’t a proper establishment for a venerable foodie or a Chatty Cathy who lives for the art of dinnertime conversation. It’s a low-lit place of theatrical exhibition daydreaming and gushy, endlessly entertaining cinematic valentines. The food might be routine, but the ambiance is original; a perfect excursion for any film fan in your life. Or anyone who digs grenadine.

They should add that stuff to the water supply. 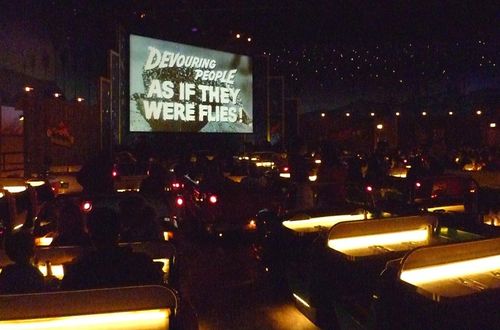 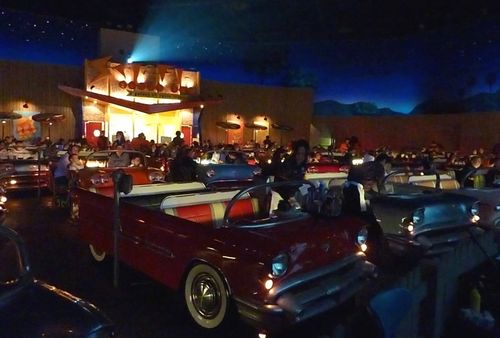 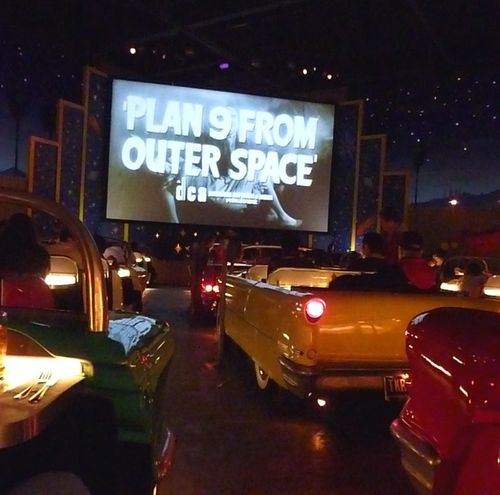 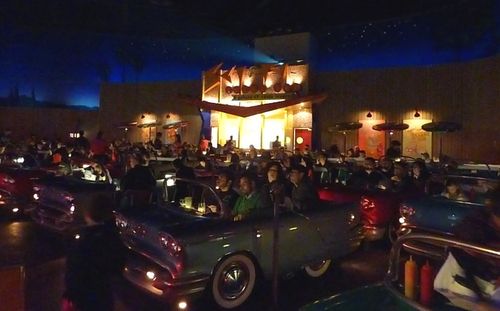 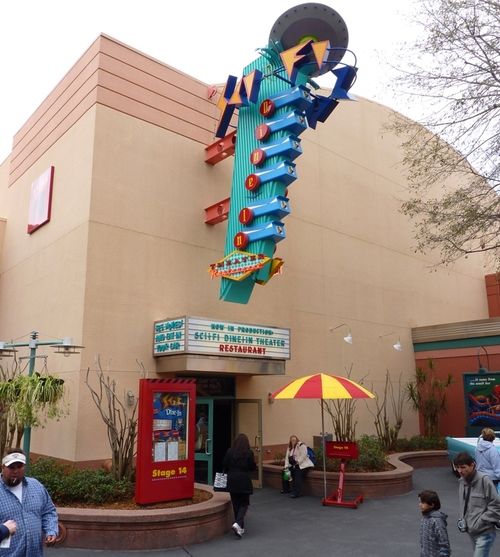 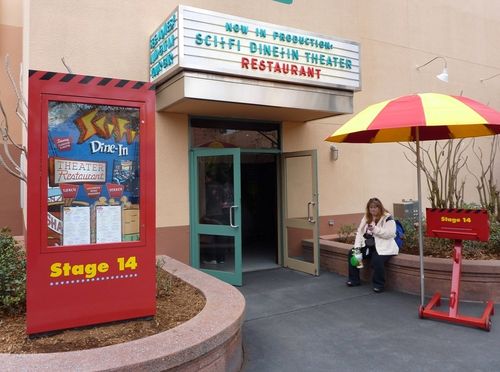 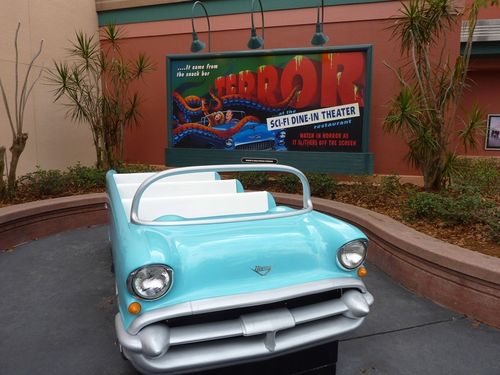 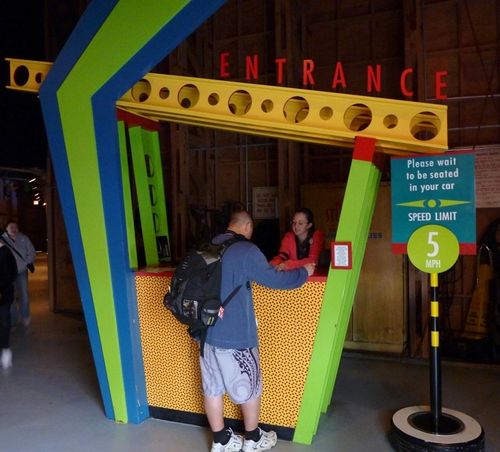 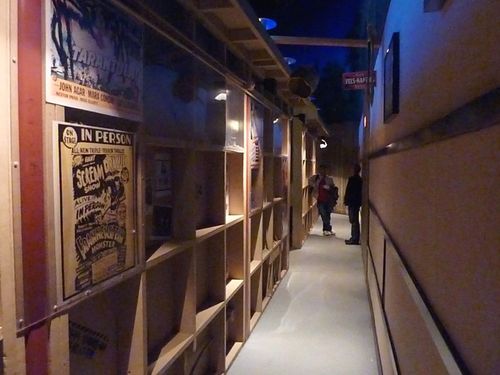 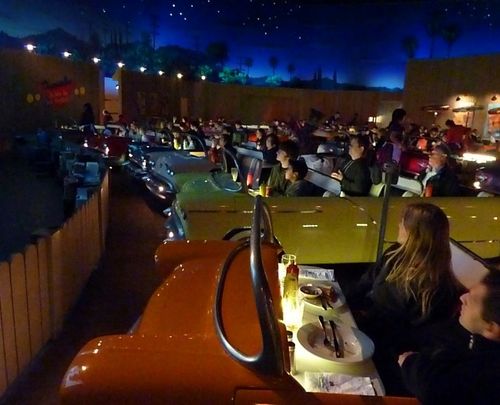 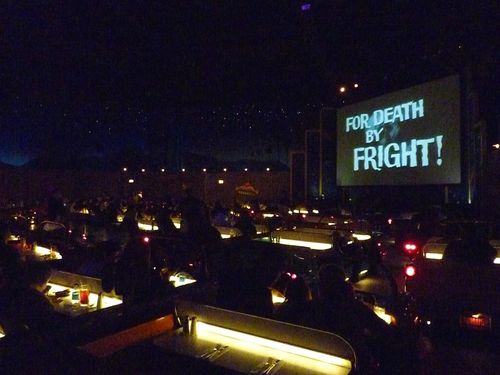 Boy do I love The Sci-Fi Dine-In.

Spot on review. I remember my family came to the same conclusions about the food, tightness of seating, and length of the loop back in 1990. I still have a fond memory of it, though. What I didn't realize back then was that there is an honest to goodness three screen drive-in in Warwick N.Y., about a half hour from my home. It has a decent concession stand, and the sound is crystal clear through the radio if you have a good system in your car. Plus, there's almost always a couple of horror movie playing. It's a bit hick-y however, and I doubt the management will ever realize the excitement they could generate if they'd dedicate just 1 screen 1 night to some old B-flick double feature instead of the latest, unimaginative, un-pretty Pixar movie. Oh, well. One thing that is pretty retro is the price. $7.50 per person for a double bill. And you can bring your own beer cooler or whatever else you may wish to indulge in.

Glad to see you love the Sci-Fi Dine In! It's a must-go-to favorite of myself and my family when we visit WDW. As you pointed out, one doesn't go necessarily for the food (although the BLT soup is awesome) but the ambience is fantastic!