“The Runaways” opens tight on a drop of menstrual blood. This image can be digested three ways: a sign of oncoming womanhood, a defiant stand of earthy feminism, or a wildly accurate reflection of director Floria Sigismondi’s irritating fixation on details that have little to do with the amazing story of the band in question. Take your pick, as any path will lead to the same conclusion: “The Runaways” is a dim, gutless approximation of the feisty group and their brief bath in the frigid ice waters of fringe celebrity.

The year is 1975, and Joan Jett (Kristen Stewart) is a struggling guitar player dealing with her sexual identity and lack of social comfort. Cherie Currie (Dakota Fanning) is a prim young girl with a taste for the classics, trying to find herself with help from her twin, Marie (Riley Keough). The girls are soon slapped together by Kim Fowley (Michael Shannon), a vicious Svengali who seeks to manufacture a female rock band as a way to capture massive media attention. Building The Runaways with Currie on vocals, Jett and Lita Ford (Scout Taylor-Compton) on guitar, Sandy West (Stella Maeve) on drums, and Robin on bass (a fictional role played by Alia Shawkat), Fowley pushes the ladies to take over the world. However, the domination is short-lived, as tensions in the band explode, leaving Jett and Currie burnt out and used up by the age of 20. 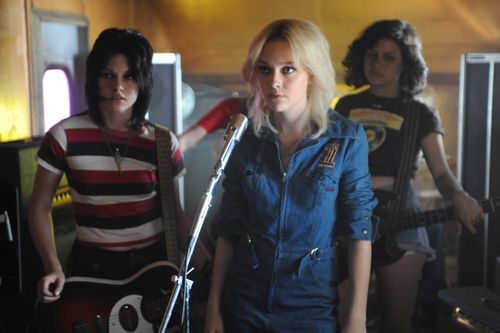 To fully appreciate what Sigismondi aims for with “The Runaways,” the film has to be approached as a full-out cartoon. It’s a semi-fictional take on the band that pulls every last punch, putting the spotlight on Jett and Currie simply because they’re the only two band members who stand to profit from the picture (Jett executive produces here). It’s a film about a scene, not a group, but Sigismondi refuses to acknowledge the limitation of her scope, swinging spastically with flashes of feminism, abuse, lesbianism, managerial eccentricity, and the corroded dream of superstardom in Hollywood. The band and their buzzsaw music are secondary characters in this lifeless picture, or often not even addressed at all.

The template for “The Runaways” is a conventional touchdown sprint of drugs and sexual excess, reheated throughout cinema history before striking box office gold with the one-two punch of “Ray” and “Walk the Line,” eventually satirized to perfection in the 2007 comedy, “Walk Hard: The Dewey Cox Story.” The saga of The Runaways is fraught with deception, lust, peril, and antagonism, but the film only fixates on obvious circumstances of chemical awareness, which does a great disservice to the band’s peculiar history. Of course, keeping to the pills and blow permits the director to trot out a parade of hackneyed visual flourishes, cranking up the haze and neon to capture a tight-pantsed, glitter-thwacked 1970s mood, encouraging the suspicion that Sigimondi doesn’t care much for the band at all, preferring to focus on the same pedestrian camera moods viewed in hundreds of other rock bio-pics.

This being the Jett and Currie show, fans of The Runaways might come away disappointed with the picture’s lack of musical emphasis. The other three members are merely background mannequins (poor Shawkat isn’t even allowed a line of dialogue), there to fill in during the infrequent performance scenes. Allowing for any depth in the band would take away from the film’s odd determination to rework history, forgoing any sense of unity to play up Jett’s lesbianism (her defining characteristic here, with little said about her musical chops) and Currie’s defiant sexual stance; a blond wisp of a teen girl standing in front of thousands wearing lingerie to appease Fowley’s insatiable hunger for attention. “The Runaways” is rarely ever about The Runaways, which defeats the whole idea of the film. 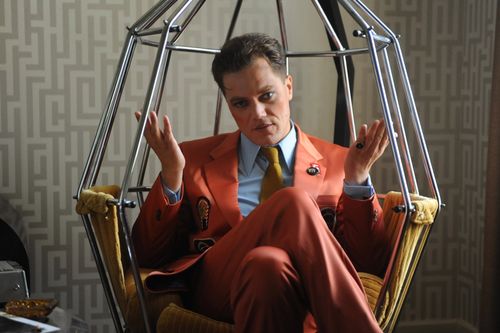 Equally as baffling is the picture’s theme of world-conquering feminism, even though it identifies Fowley as the sole architect of the band’s success. He co-wrote the songs, built the band, badgered the girls into skimpy outfits, booked the gigs, and raised hell when they balked. To Sigismondi, The Runaways had almost nothing to do with their success, confusing the tone of womanly triumph the picture attempts to inch into the final cut. So much for female role models. It leaves “The Runaways” with the idea that the group was nothing more than a paper doll set for Fowley to dress and undress at will, masterminding every step of the process. Of course, none of Fowley’s alleged sexual and physical abuse is ever brought up. I guess that would take time away from shots of twirling band members lost a drug fog. Every music bio-pic needs plenty of that. Substance? Honesty? Ew.

Also undercutting the idea of the band as a singular force of feathered-hair nature are the performances, which fall short of conveying any sort of emotion tied to such a meteoric rise to international fame. Stewart and Fanning are drywall as Jett and Currie, staring blankly at the camera as their way of conveying a besieged mentality befitting overwhelmed rock stars (at least in Japan). Matters sour further when time comes for the pair to perform, displaying a stiff, inhibited stage presence when the real deal was far more animalistic and chaotic. The singing is even worse, though I give Fanning credit for even trying to match Currie’s corkscrew vocal work. She fails cringingly short, but it’s a brave shot. 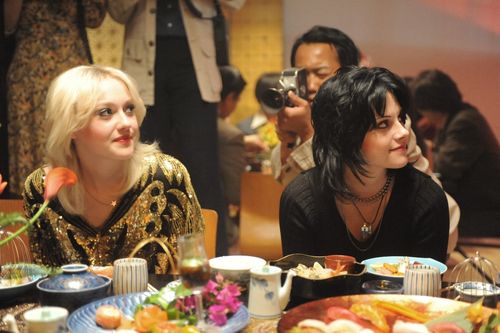 Shannon stomps around like a Looney Tunes character as Fowley, which tires quickly, furthering the one-dimensional mission of the film. There’s never a point where Fowley’s erratic, abusive behavior transforms into a larger portrait of plausible psychological control. He’s just a raving lunatic for the sake of performance quirk, never the master manipulator that drives the band off a cliff.

The Queens of Noise aren’t handed a fair deal with “The Runaways,” which trivializes much of the struggle, rebellion, and notoriety the band encouraged over the course of two years (the film doesn’t step past Currie’s 1977 resignation). The film layers on the gloss, taking an aggravating stance of interpretation over reflection, allowing for a broad artistic license that doesn’t return much substance. “Edgeplay,” the 2004 documentary on the band, is unforgivably sloppy, but it plunges further into the sickness and the triumph (without Jett’s participation), creating a startling portrait of a female band daring to make a ruckus in a man’s world. “The Runaways” doesn’t show the same respect, using the legacy of the group purely as a facade to rummage around moldy bio-pic bad habits. It’s all warped surface, blunted character estimation, and woeful direction. 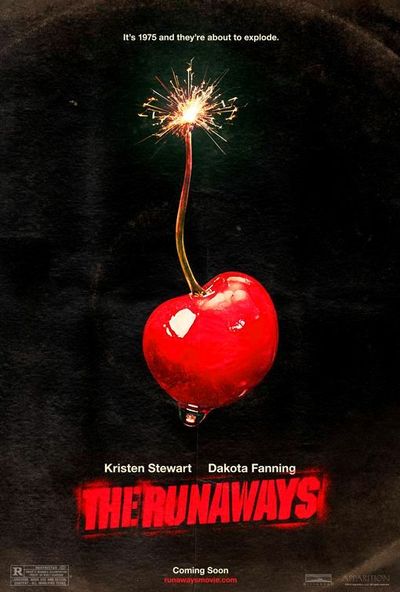