Making up a U.S. Special Forces team called “The Losers,” Clay (Jeffrey Dean Morgan), Roque (Idris Elba), Jensen (Chris Evans), Pooch (Columbus Short), and Cougar (Oscar Jaenada) have found devastating trouble in the jungles of Bolivia when their might rubs up against the sinister mind of supervillian Max (Jason Patric). Essentially left for dead, the squad takes refuge in the city, making ends meet as Clay burns for revenge. Help arrives with a job offer from Aisha (Zoe Saldana), who wants to hire The Losers to strike back at Max, who’s near possession of a “green” bomb that will reinvent international terrorism. Slipping back into the U.S., the team kicks off a master plan of payback, but while all eyes are on Max and his wicked ways, issues of loyalty threaten to destroy The Losers at their very moment of triumph. 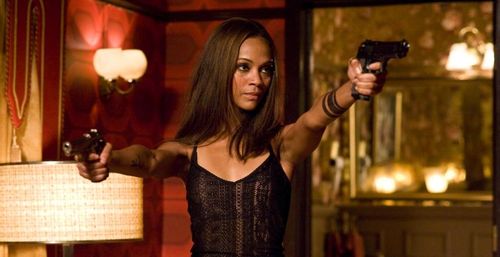 Slick and silly, “The Losers” was scripted by Peter Berg and James Vanderbilt with a goal to provide a head rush of comic book attitude and visual elasticity. Considering his previous film was “Stomp the Yard,” it makes sense that director White would retreat to the Bay school of gloss over grit to corral that written vigor, playing with all trendy cinematographic tricks the studio will allow. It’s a slo-mo, CG-enhanced jumble of chaos (kept bloodless to preserve the PG-13 rating) that develops an ink and paint ambiance of anything goes, but it also stamps the film with a hacky visual identity it doesn’t need. White slathers on the polish to keep the film alert, and while the images are wonderfully pronounced, the camerawork occasionally detracts from the experience, overreaching to make a clichéd impression.

Depending on your own personal level of patience, there’s an element of camp to “The Losers” that either makes or breaks the film. The character of Max is the ingredient up for debate, as Patric plays the role with a Blofeld-on-PCP approach that turns sections of the movie into a wink contest. It’s good to see the traditionally comatose actor relishing time in the sandbox, but the performance is so broad it bursts the pop reality of the movie. The screenwriters dream up some embarrassingly juvenile dialogue for Patric (for the whole cast actually, as this is a film better seen than heard), but he powers through his scenes with a paycheck-cashing professionalism, even making the absurd Al Gore bomb concept work through his sardonic effort. Max isn’t so much a threat to national security as he is a demonic comedian, robbing the film of any tension as The Losers gear up to take down what appears to be a particularly surly Don Rickles.

The action attacks hard, with each member of the team demonstrating their particular skill while The Losers embark on a few irreverent adventures, often decimating city blocks in the process. White has a good command of these varied personalities and gifts, but the picture hungers more for laughs than thrills, which dampens the excitement. “The Losers” is entertaining, but never funny, better brandishing a bazooka than tossing around punchlines. Matters go berserk in the final reel, but the material belongs in this blender environment, delivering all the highly caloric brutality it can muster, while splashing the screen with stunning color and cartoon fury. It’s an amusing ride. 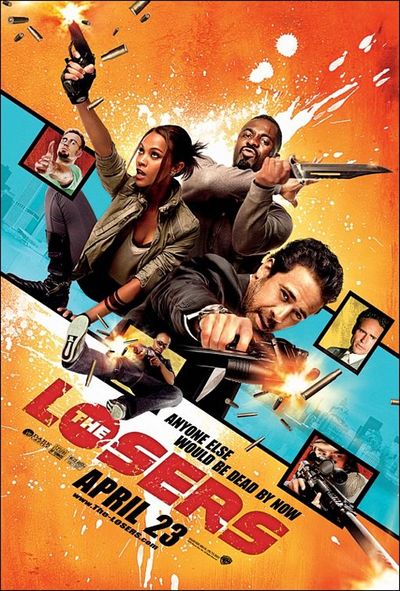 You review sums up the film perfectly. It doesn't deserve anything more than a B, but I was please you didn't trash it. For me, Jason Patric was fantastic and I enjoyed his over the top comic book villain. Jeffrey Dean Morgan and Chris Evans were awesome and I'm always up for watching Zoe.