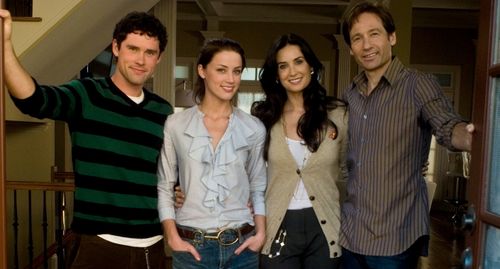 “The Joneses” contains an impressively timely premise that drills right into the heart of today’s financial crisis. It’s almost too sharp of a script, which is carried a surprising distance by writer/director Derrick Borte before it falls completely apart, but what works here works wonderfully, providing a painfully accurate depiction of materialism run amok.

The Joneses have just arrived in a posh community, with dad Steve (David Duchovny), mom Kate (Demi Moore), and kids Jenn (Amber Heard) and Mick (Ben Hollingsworth) settling into their mansion, ready to take the neighborhood by storm. Winning over the locals with their charms, good looks, and a steady stream of amazing possessions, it almost seems the family was created by a marketing hit squad -- a living, breathing commercial for the good life. Turns out, that’s exactly what The Joneses are, with Steve making his professional salesman debut in the father role. While sucked into the thrill of the moneymaking hunt, Steve comes to doubt his place in the company when he falls for Kate and begins to grasp the ugly side of consumerism, leaving him torn between the requirements of the job and the demands of his heart.

For the first two acts, “The Joneses” develops a playful personality that’s irresistible. It’s a story that allows for expansive sweeps of satire, but Borte keeps his cool, arranging the faux family as fatigued employees, not as a lightning rod for lessons on corporate immorality. There’s a cocktail hour tempo to the early scenes that helps the audience buy into the brood as a believable unit of promotion, with each member taking off into their own direction of expertise: Steve the golfer, Kate the domestic goddess, Jenn the teen fashion queen, and Mick the hunky gamer.

After digging their talons into the neighborhood, the cracked family dynamic begins to reveal itself in the screenplay, which doesn’t knock Borte completely off-balance. Keeping the air of the movie buoyant through Duchovny’s twinkly, wry performance and Moore’s compelling ladder-climbing determination, “The Joneses” retains a potent second wind, revealing the ruse without crippling the film with hurried gravitas. Borte makes his salient points on the lust, jealousy, and annoyance of consumerism while juggling the needs of the characters, easing Steve and Kate together through “professional” displays of affection, which only encourage Mr. Jones and his deteriorating sense of duty.

“The Joneses” works around an insightful canvas of topical situations, most pointedly in two neighbor characters (played by Gary Cole and Glenne Headly) who attempt to keep up with the power family, falling deeper into debt with every useless purchase. That sensation of envy is an effective tool for Borte, attaching a competitive spirit to the picture that reflects the American Dream with frightening accuracy. The suffocation of jealousy is something I wish the film followed more profoundly, as it seizes on a mentality that plugs directly into the national conversation.

While there are a myriad of ways to work up “The Joneses” to a satisfying conclusion, Borte lurches toward the sensational, aiming to provide a rude awakening for Steve in order to clear his mind in a hurry. The slapdash final act is a disappointment, trying to maneuver characters into positions the film hasn’t spent the proper amount of time developing, while missing a larger opportunity to twirl the satire to its natural conclusion of all-encompassing destruction. It's a lousy final act to an otherwise devious piece of work, with Borte trying to warm the tone of his film when matters were better left perfectly cold-blooded. 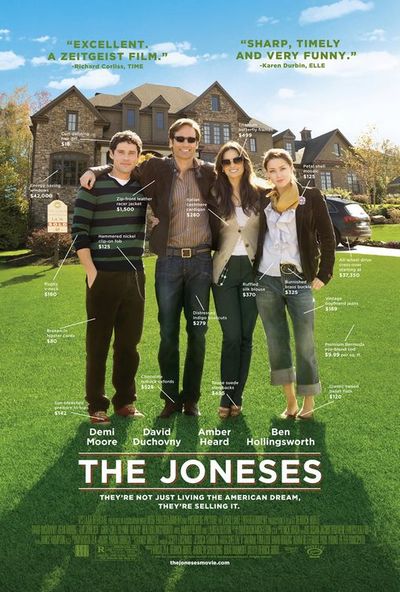