The zombie outbreak is still tearing through America, with Sarge (Alan Van Sprang) and his soldiers crossing the countryside looking for a safe haven. Finding an online invitation to the remote Plum Island, Sarge and his squad head off to locate O’Flynn (Kenneth Welsh), a crusty Irishmen who’s looking to return to the secluded land to exact revenge on crustier Irishman, Muldoon (Richard Fitzpatrick). Fighting over the future of the island, Sarge and company are put in the middle of a longstanding feud, with O’Flynn looking to slaughter all the zombies to preserve what’s left of the population, while Muldoon seeks to keep the dead alive, hoping for some sign of life.

Unlike the previous “Dead” pictures, “Survival” is something of a semi-sequel to “Diary,” establishing continuance through Sarge and his roving band of National Guard recruits. For a film series that’s been habitually shy of establishing timelines, the newfound concern with sequelizing opens a few intriguing opportunities that Romero doesn’t do anything with, perhaps only keeping a connection to the cut-rate “Diary” to further cover his painfully low budget and limited locations.

“Diary” was more experimental in design, attempting to communicate the zombie outbreak with POV footage, allowing Romero to comment on the idea of media ubiquity while still thrashing the undead. “Survival” returns everything back to solid dramatic ground, with the battle for the living contorted into a western of sorts, with a brassy Irish blood feud drawing a line in the sand between those with zombieland certainty and those with hope. 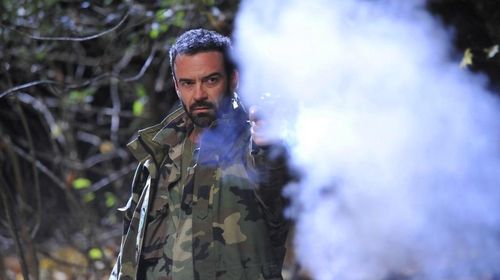 Turning the zombie apocalypse into an Irish jig should’ve opened the screenplay up for serious lunacy, yet “Survival” seems pooped, reluctant to have fun with itself. Even the gore sequences are muted, with CGI replacing the realism (and expense) of practical effects. Some of the action sequences stand out and the make-up retains a few wonderfully graphic moments, but the artificiality is deflating, taking the red, juicy joy out of the genre’s enthusiasm. And this being a film seemingly financed only by hopes and dreams, the computer effects are on the slapdash side, squashing the suspense.

I suppose “Survival” has something to say about the state of the world, but Romero’s infamous social subtext is buried miles beneath layers of dreadful acting and ridiculous plotting. The director has worked over zombies since 1968, but the energy clearly isn’t there anymore. “Survival of the Dead” is graceless and shoddy, making zombie killing, the sport of kings and nerds, actually difficult to sit through.