Ben Kalmen (Michael Douglas) is a man of 60, but is trying to avoid the encroaching reality of aging through a steady streak of young lovers, while angling to put his professional life back together after a dark period of fraud. Ignoring a health issue and dealing with a troubled relationship with his daughter (Jenna Fischer), Ben is near rock bottom, with his place in hell confirmed through a seduction of his girlfriend’s daughter (Imogen Poots). Facing financial calamity, Ben retreats to the college town of his youth, seeking solace in the company of old friend Jimmy (Danny DeVito) as he sorts out his nagging troubles.

Despite marketing that wants to paint “Solitary Man” as a lighthearted adventure surveying a rascally middle-aged man refusing to sever his boyish roots, the picture is a more severe affair, marked by a harsh emotional truth that’s cleanly painted onto every scene. Written by Brian Koppelman and directed by Kopplemen and David Levien (“Knockaround Guys”), “Solitary Man” retains a roguish wit with Ben’s glad-handing personality and business exaggeration, but the underlying nature of the film is a penetrative shot of reality, communicating the wandering appetites of a man who assumes he’s been handed a death sentence. 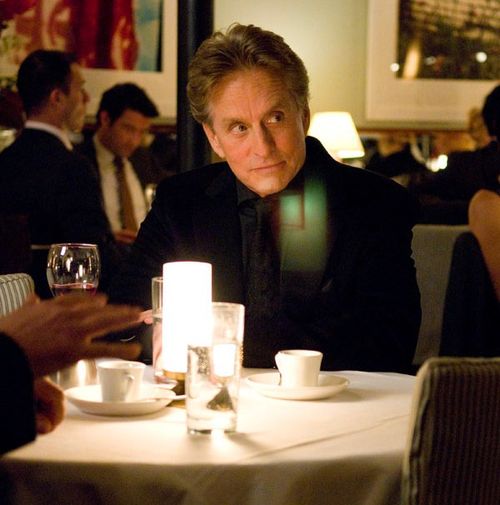 Ben’s a delightfully complex, interior character of habit, scripted outstandingly as a compulsive machine of disgrace. The directors like to hold Ben’s feet to the fire, dropping the character into a series of confrontations to chart his offenses, along with his instincts to dodge responsibility whenever possible. While it’s not a joy to watch Ben purposely deface his character, the pathology of the man is hypnotic, blessed with a script that’s honest with reaction to such a repellent, yet strangely charming fellow. Ben’s a creep, but he has these enchanting dimensions that flesh out his flamethrower attitude past basic explanations of emotional pain. The character is wounded, certainly, but he’s also addicted to the game of seduction, refusing to allow his age to dictate his bedroom demands. The girls keep him young, the thrill of reinvention keeps him young, but the bigger picture of maturity continues to thrash his comfort. It’s an exceptional screenplay.

Michael Douglas handles the role like the maestro he is, deftly weaving together equal helpings of poison and marquee personality into Ben that keeps all eyes on the screen. If there wasn’t already a “Wall Street” sequel coming out this year, I would label Ben Kalmen as the natural extension of Gordon Gekko’s silver years, emerging from a professional humiliation raring to jump back into fray, only to find his peers and loved ones have grown tired of the deception. Douglas captures the glint as well as the gloom, infusing Ben with a toxic mischief that constantly derails his friendships (Jesse Eisenberg plays a college-aged student of Ben’s lothario wisdom), yet is strangely soothing to his troubled soul. I adored the actor’s work here. Even better are Douglas’s scenes with pal DeVito, which drip with a type of actorly ease only these guys could conjure. Frankly, I could watch an entire film of these two shootin’ the breeze, but there’s a story that needs attention.

“Solitary Man” doesn’t provide easy answers in the end, and perhaps the conclusion, while perfectly realized, doesn’t send the viewer off with the type of catharsis necessary to digest the entire film. It leaves a few emotional threads dangling on purpose, but the overall concept of the picture remains in a potent position, directly hitting viewers with a portrait of a man refusing to take the end of his life lying down, unless it’s in the company of a woman, preferably blonde and easily charmed. 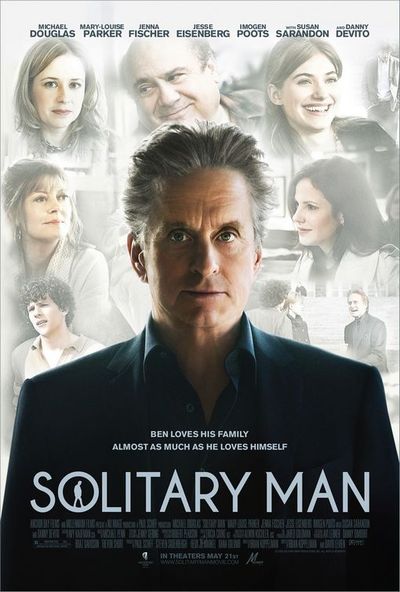