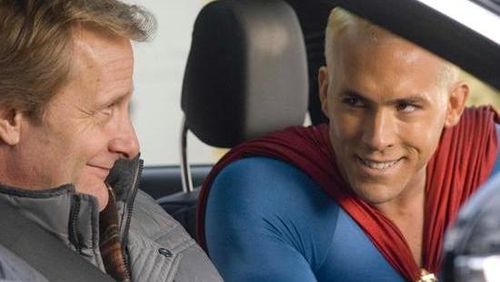 “Paper Man” has the appearance of a deeply felt, earnest film concerning unfinished emotional business. It literalizes the burden of guilt in strange seriocomic ways, but the film as a whole is a woeful misfire of inexplicable outbursts and overpowering performances. “Paper Man” certainly reaches out for a hug and demands a few tears, but the execution of the film is irritating, making this sensitive picture dishearteningly hopeless and, at least during a few key moments of the feature, seemingly endless.

Richard (Jeff Daniels) is a novelist urged to start work on a new book by his estranged wife, Claire (Lisa Kudrow). Driven out to rural New York to find inspiration, Richard spends his days staring at a typewriter and seeking advice from his lifelong imaginary pal, Captain Excellent (Ryan Reynolds). Growing frantic as his writer’s block intensifies, Richard finds some peace in Abby (Emma Stone), a prickly teenager with her own persistent set of self-worth issues. The two form a tentative bond over a love of soup and kindness, but their age difference troubles outsiders, while Richard’s mania fights to find an outlet that will calm his agitated mind.

“Paper Man” has a curious touch of absurdity with the Captain Excellent character that’s rarely allowed to fully exhale. The idea is to suggest something of a Peter Pan syndrome for Richard, who holds tight to his fantastical superman as a means to retain a friend and encourage an accomplice. The relationship has wounded his marriage and bent his psyche, leaving him with no one else in his life but a platinum blonde muscle man clad in blue and yellow tights, topped off with a flowing crimson cape (Reynolds deserves an Oscar for making this role work at all). This visual is precisely where filmmakers Kieran Mulroney and Michele Mulroney lose the momentum of “Paper Man,” which walks a slack tightrope of borderline insanity that isn’t sure whether to make viewers laugh or cry.

“Paper Man” is heartfelt, but to achieve specific moments of emotional purging, the filmmakers turn on the melodrama hoses and wet down the screenplay with dreadful statements of creative and mournful denial. There’s a large number of incomplete character arcs going around this picture (including an unclear bit that finds Richard desperate to work with his hands), and the film only manages to articulate a small percentage of the hurt successfully. The rest of the story staggers around, assuming a sense of significance when nothing’s actually been earned. Daniels and Stone share a credible chemistry with a few solid scenes of endearing communication, but the directors don’t invest in the power of images, pushing the actors to bleat about in contrived circumstances to make a redundant point of frustration.

There’s a better film within “Paper Man,” buried deep underneath the fractured ideas and bizarre displays of invented companionship. It’s a shame the Mulroneys spend all their energy highlighting obvious points of conflict and immaturity, leaving an unsatisfying picture free of the cathartic wallop it so hungrily desires. 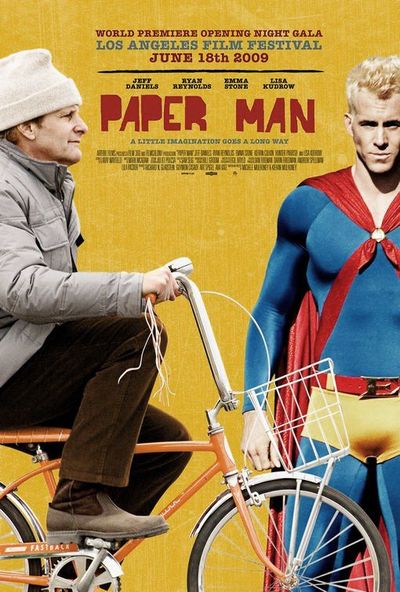