It’s difficult to tell exactly how “Kick-Ass” considers the comic book/superhero genre. On one hand, there’s a profusion of love offered to the subculture through a series of crafty inside jokes and tributes only a few knowing audience members will understand. On the other hand, “Kick-Ass” is a tone-deaf pantsing of the superman cause, creating an incredible ruckus as it breakdances on hallowed ground, preferring noise over wit when it comes to giving funny books a comprehensive noogie. Only vibrant in spurts, “Kick-Ass” is a distractingly frenzied picture lacking true satiric aim, making the oncoming mess of ultraviolence more bothersome than rousing.

Observing his city caught in the chokehold of crime, Dave (Aaron Johnson) has elected to assume a superhero identity and prowl the streets, searching for innocents to defend. Dressed in a green scuba suit and rechristening himself Kick-Ass, the teen avenger finds life as a masked crusader more grueling and bone-breaking than he initially imagined. Quickly becoming a media sensation, Kick-Ass pulls a few more makeshift superheroes out of the shadows, including Big Daddy (Nicolas Cage) and his 11-year-old daughter Hit-Girl (Chloe Grace Moretz), both heavily trained and armed to the teeth. On the other side of the law lies mob kingpin Frank D’Amico (Mark Strong) and his teen son Chris (Christopher Mintz-Plasse), who are fed up with Kick-Ass interfering with their foul plans. Trying to balance life as an awkward teenager and as an easily toppled superhero, Kick-Ass is soon pulled into a brutal war Big Daddy is waging on Frank and his cronies for reasons that go beyond simple crime fighting courage. 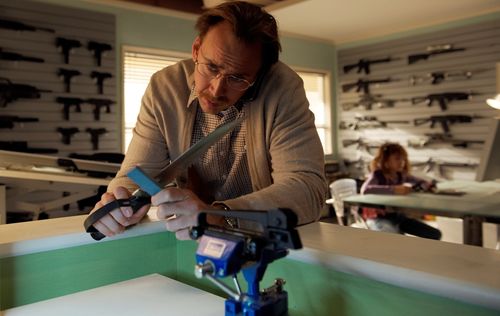 Based on the comic book series created by Mark Millar and John Romita, Jr., “Kick-Ass” is pure geekery, and these types of endeavors generally require a different set of critical antennae, tuned into a sharper pitch of colorful irreverence. “Kick-Ass” plays much more broadly than its subversive origins promise, with director Matthew Vaughn turning the acerbic source material into a bold, bright fantasy of do-it-yourself heroism, taboo-smashing dialogue, and frequent bloodshed. Trust me, “Kick-Ass” earns its R-rating.

As with his previous productions “Layer Cake” and “Stardust,” Vaughn has proven he can shape a pretty picture, but acquiring a distinctive tone has always eluded him. “Kick-Ass” is no different, bucking wildly as it jumps back and forth between Dave’s blithe superhero initiation to Big Daddy’s more sobering motivations for revenge. It’s a difficult film to digest, since Vaughn expels so such effort to keep the viewer in a state of shock, either through unspeakable acts of violence or the potty mouth on Hit-Girl, getting plenty of mileage out of the character’s deceptive innocence, which is used as a preamble to an array of shootouts and stabbings. 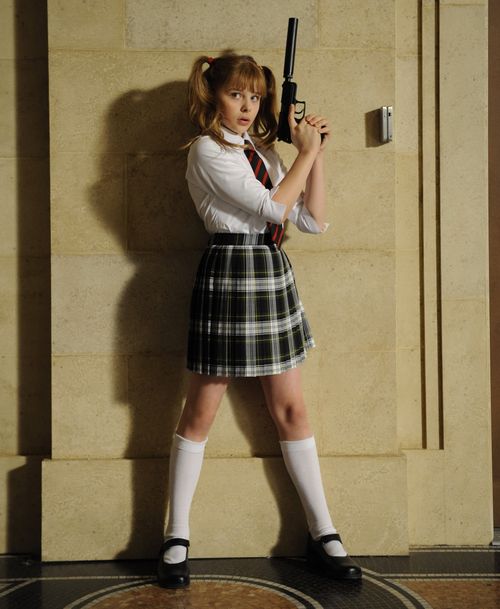 The bombshell of young Moretz working blue defines the “Kick-Ass” viewing experience, for better or worse. It’s a wholly confident performance from the promising actress, who gracefully assumes the pint-sized assassin role with an ease that fails her co-stars (Johnson layers on the Jerry Mathers teen earnestness to a nauseating degree), and her character, along with Big Daddy, is the only flash of heart in the film. Rooted in a vicious revenge scenario, the father-daughter dynamic duo gives “Kick-Ass” an actual purpose, where the Dave business tends to linger on unfunny acts of teendom that confuse the film’s focus. However, Big Daddy and Hit-Girl are only a small piece of the puzzle here, with Kick-Ass the star of the show. A shame, since the character and the performance bringing it to life lack a necessary vitality that might’ve made this coloring book all the more compelling.

“Kick-Ass” attempts the funny, but its real flavor comes from the violence. We’re talking horrible stuff befitting such a cavalier concept, which Vaughn cranks even louder by piping in ironic soundtrack cuts to underline the absurdity, or allowing Cage to fit himself for an Adam West impression as Big Daddy. Showy, brutal, and aggressive, “Kick-Ass” seems more mindlessly destructive than imaginative, permitting the viewer their every wish-fulfillment fantasy as the superheroes make mincemeat out of the baddies. There’s also the whole business of blistering mayhem involving an 11-year-old girl, but that’s a concept Vaughn is pleasingly proud of, using Hit-Girl as way to communicate the absurdity of the material, or at least remind the public at large that troublemaker Millar is involved. 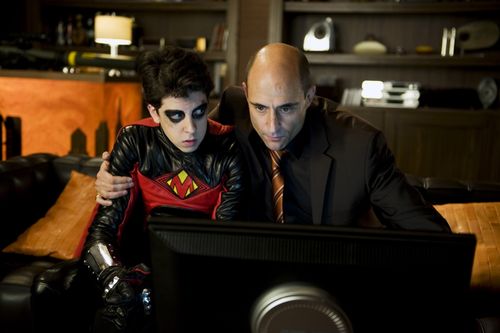 “Kick-Ass” ends with a war between the superheroes and the criminal goombas, taking the whole enterprise into pure overkill as the outrageousness of the direction is pushed into the stratosphere, effectively killing the texture of the filmmaking and whatever pinch of reality remained. But hey, as long as a tween in a schoolgirl outfit is braining the enemy with a variety of ludicrous weapons, should there be any demand for depth? Actually, it never hurts.

Normally something as brazen as “Kick-Ass” would fall into a love-it-or-leave-it category, dividing causal audiences and the geek nation, who will surely lap up anything the film delivers when the irreverence is spewed this intensely. I fall somewhere in the middle, embracing the faint points of substance the film eventually ignores all together, enjoying the film’s energy when it finally settles on an idea. It’s a noisy bit of ugly business, but “Kick-Ass” still feels hollow and rabidly determined to get lost in the cartoon method, not charge ahead with a grand purpose the premise seems to hunger for. 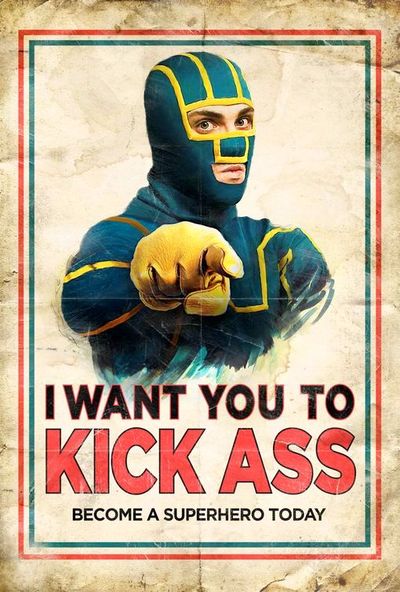 You liked it more than I did, but I had the same feeling that Bid Daddy and his daughter should have been the main focus. The character of Dave was like Susie and Dallas from Sweet Smell of Success: boring. We can't wait to get back to Sidney and J.J.