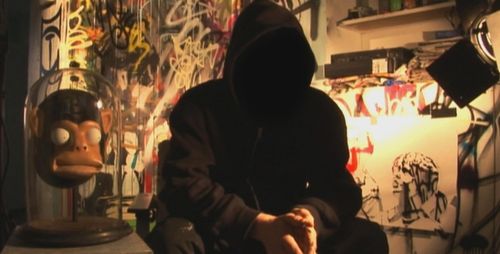 The street art movement, which narrator Rhys Ifans likens to punk rock, began as a way for gifted youth to express their ideas on public consumption and the state of the union. It legitimized graffiti and vandalism in a way, giving rise to several stars of the scene, including Invader, Shepard Fairey (the mind behind the Barack Obama “Hope” poster), and Banksy, who all appear in the documentary. Their rise to fame is an interesting arc of troublemaking turned into wondrous profit, but there’s another story the film wants to tell, about a man who was supposedly there to document the movement, only to find himself joining the gang: Thierry Guetta. 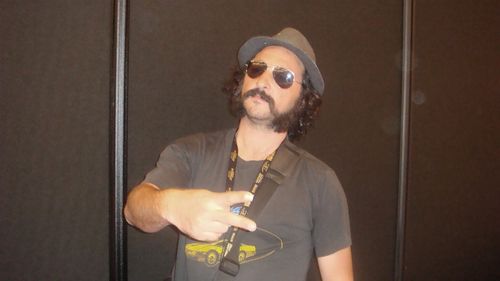 Guetta is a portly Frenchman with thick sideburns, scenester clothes, and an OCD compulsion to videotape his every waking moment, blaming the urge on the sudden loss of his mother. He’s mentally questionable, but full of life, devoting his soul to the street art currents, looking to befriend all the major players under the guise of a documentary he never intended to make. Guetta is a real character and his itch to impress drives the core of “Gift Shop,” with much of the film devoted to his Hi-8 footage, which captured his sycophantic mentality and boundless curiosity. Through the years, Guetta developed himself as a confidant and chronicler, but his true quest, his raison d'être, was to snuggle up to the enigmatic star of the show: Bansky.

The most illustrious of the street artists, Banksy’s a Brit with an endless appetite for mischievous artwork, spreading his messages and startling images all over the world. Banksy is an elusive icon who appears in “Gift Shop” shrouded in darkness, with a digitally altered voice that sounds suspiciously like Ifans. He’s also credited as director here, but that’s open for debate as well. Though very little is revealed about him, Banksy is the blood (or spray paint) that flows through Guetta’s veins, and the impetus for the eventual transformation that takes Guetta from a probing observer to a major force in the street movement, or so we think. 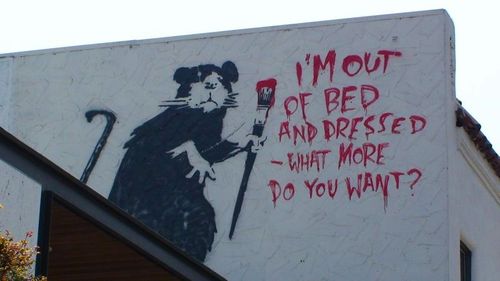 I assume there’s an irony at play with “Gift Shop,” detailing how Guetta basically snuck in the back door of the industry, taking lessons gathered from his time on the street to create his own brand, rechristening himself Mr. Brainwash. Both celebratory of Guetta’s pop art accomplishments and annoyed with his transparency, Banksy fashions something of a hit piece with “Gift Shop,” inspecting the flowing toxins of hype and ego as Mr. Brainwash becomes an art-world darling due to some clever marketing and a general piggybacking on Banksy’s name (complete with an alt-weekly cover story and line of wealthy art vampires ready to cash in on a carefully manufactured reputation).

“Exit Through the Gift Shop” doesn’t really show any fangs, only mild displeasure with the state of the street art union, with Banksy himself lamenting the purpose of it all. There are a hundred questions left behind worth asking about the subculture: How do the artists afford it all? How do they consider the crime of vandalism? How do Guetta’s wife and three children truly feel about his rise to fame? What does Banksy think of the commodification of his work? How do the defaced building owners approach the street art plague? The documentary is wholly unenlightening, perhaps even fearful of a discussion that might challenge the integrity of the art world since, as viewed in this picture, the participants seems very uncomfortable verbalizing anything more than their own mythmaking or distaste for others. 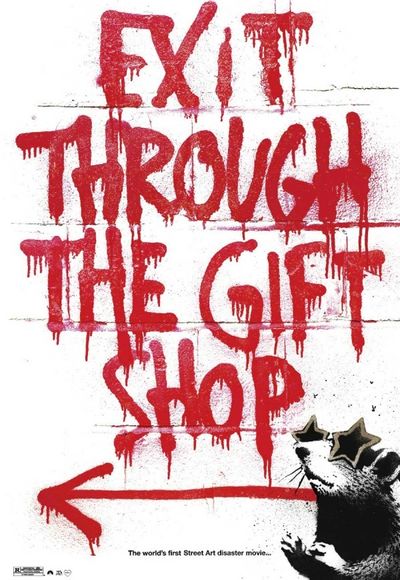 I sincerely feel you missed the underlying point of this movie, in that it is doing specifically what you were afraid it might be doing, namely "challenging the integrity of the art world scene".

I'll try to answer the questions you say it poses.

How do the artists afford it all?

It states in the movie Thierry Guetta owned a very successful vintage clothing store and took out a mortgate to support his exploits. Also Shepard Fairey owned a successful clothing line prior to becoming famous.

How do they consider the crime of vandalism?

Obviously as art, given the fact they refer to it as "street art". The fact you phrased the question this way says more about your biases towards "street art" than the movie at hand.

How do Guetta’s wife and three children truly feel about his rise to fame?

I'm sure after his making over a cool million on his first art show they were just fine with it.

What does Banksy think of the commodification of his work?

The movie showed him laughing. As a paraphrase; "it's a joke, I'm just not sure who on."

How do the defaced building owners approach the street art plague?

Again, the fact that you asked this question... but as a building owner in Los Angeles encountering graffiti, I can comment from first-hand experience. I paint over it.

I love how Matt acts all indignant, yet can't even answer all of the questions himself. What a bullshitter.

Yeah, I'd LOVE to hear what real building owners think about nitwits who paint all over their commercial real estate. That's a great question!

It's a fluff documentary for people who want to feel like they're a vital part of the street art movement. These goofs are laughing all the way to the bank. Nobody challenges them.

Nice review. Glad someone can see through the nonsense.

I for one chose to enjoy the flick for what it showed, not for what it didn't... The documentary had a point of view, which isn't always going to line up with your own personal wants. For me personally I didn't need to see interviews with property owners either bemoaning or praising the graffiti. I loved seeing the world of the street artist, and I especially loved how it exposed the whole notion of "what is art?" Mr. Brainwash's "art" became sellable because of an LA Weekly article and a snarky quote from Banksy, and we got to see the aftermath. I thought it was brilliant. Add to that that it might all be a hoax and it's potentially even more brilliant...

People, this movie is a hoax- Mr Guetta did not "make a cool million". Are you not aware
what it would cost to hire a string of artists, promoters, the building for 2
months? Not to mention the equipment? That alone would leave you at 0 for the event-
A very slick, brilliant movie! But, the joke
is on all of you!
The phantom

Yeah, I hate to say it - but the reviewer here ends up with egg on his face...he not only missed the POINT of the film, he kind of missed the film ITSELF.

Like poor old Rosanne Rosannah-dannah, you're bemoaning something you don't understand...the film is fiction. A grand joke. And, if you care to read nearly all of what's been written about it, you'd probably suspect as much.

Maybe you should think twice about directing people towards (or certainly away from) films.

a brilliant movie that reveals the art world (and collectors) as the vapid and superficial things they, in fact, are.

I think this review has a good point in that this film is creating a cult, but more a cult around banksy than anything else. He has successfully demonstrated that even in street art, there are those that have taken advantage and sullied the medium, or even sold out.

This documentary kindof seems like a way of saying to the world: "i'm still the ballinest, you can't touch me. I'm a ghost." Even though he has brangelina in attendance for his shows.

It's his way of touching upon streams in his movement that he doesn't agree with, and shows us once again that the middle class is completely gullible and that the corporate machine really has turned us into the ideal consumer.

Honestly, he is a sellout, but then again, who isn't?

This guy needs to stop being a critic and go into producing reality tv. I think he could be the auteur who turns "the bachelor" & "celebrity apprentice" into sensations with the critics; which again, he is not. Oh, he should see if Mr. Brainwash would like to be his assistant.