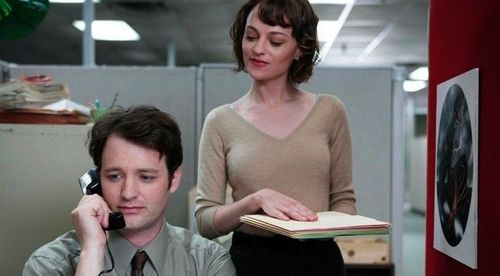 At the OmniLink Corporation, the office employees are suffering through the daily grind of managerial control and interpersonal blunders. For Brian (Jonathan M. Woodward), life has been stable, spending his days working diligently, palling around with friend Clark (Samm Levine), and crushing on his officemate, Amy (Angela Bettis, “May”). However, Brian’s routine is decimated when he learns Clark and Amy are aliens sent from warring planets, leaving the overwhelmed drone frantic to figure out a way to save Earth before it’s destroyed by a looming attack from outer space.

“Drones” is a chipper look at workplace policies and relations, delivered with an alt-whimsy approach more suited to a YouTube sketch, or perhaps one of the more amateur additions to Funny or Die. It’s a film defined by the tempo of its screenplay, structured in a rat-tat-tat fashion where the actors hit each other with mouthfuls of glib dialogue and endure limited body movement, in the vein of Kevin Smith’s “Clerks,” only without a bravura sense of filth that makes interminable indie film banter worth waiting for.

Taking office politics to their natural extreme of alien invasion, “Drones” is rooted in the fine art of reveal. With Brian as our bewildered surrogate, the screenplay waltzes into the chilling cubical labyrinth, greeting a multitude of characters that populate the OmniLink payroll, which eventually reveals itself to be a mixture of human and extraterrestrial. Of course, there’s no real bursting sci-fi element to the picture, only an affected comedic concept keen to wedgie the office environment with a substantial dose of peculiarity. Not jokes, just peculiarity. Unless you count Brian mispronouncing alien names as funny business, or watching Amy trade lines with her space invader pal, the copy machine. PowerPoint gags? Satirical tunes on the soundtrack? The feature has nothing fresh to offer.

“Drones” is incredibly forced and monotonous, and while the actors contribute admirable efforts of emerging insanity, they often end up breathless rather than compellingly riled up. The picture has no sense of rhythm, no sense of humor, and no sense of mockery. It’s a cocktail napkin idea the filmmakers view as comedic origami, and frankly, a real 9-5 job is more appealing than anything this movie has to offer. 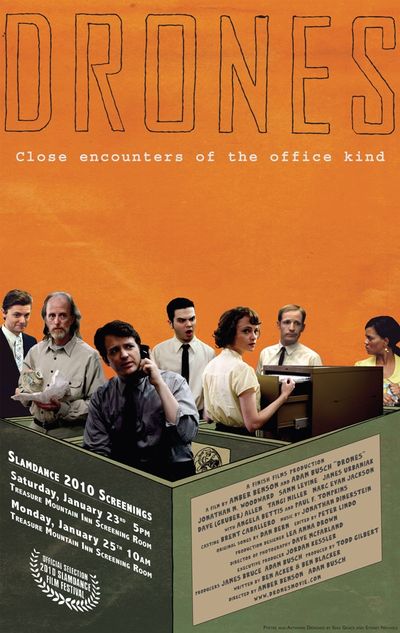