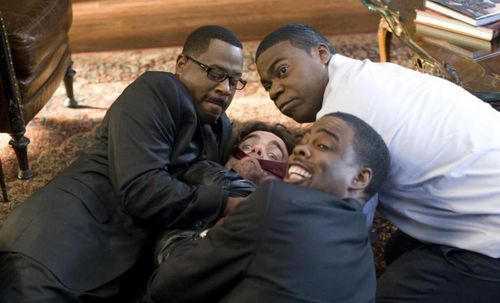 “Death at a Funeral” is a remake that updates the long-forgotten, lost-to-history, somebody-dust-this-one-off-please 2007 film of the same name. A whopping three years have passed since the original Frank Oz motion picture found a modicum of cult success, leaving this update a little too eager to redo what was already rather recently done.

Aaron (Chris Rock) is not only facing the funeral for his beloved father, but all the bills and domestic headaches that come with a family gathering. Watching his brother, best-selling author Ryan (Martin Lawrence), swoop in and steal all the attention is bad enough, but at the same time wife Michelle (Regina Hall) itches to conceive a baby, mother Cynthia (Loretta Devine) is overwhelmed with grief, and various family acquaintances (including Zoe Saldana, Tracy Morgan, James Marsden, Danny Glover, Columbus Short, and a very weary looking Luke Wilson) have arrived to disrupt this peaceful celebration of life. Also spoiling the day is little person Frank (Peter Dinklage, reprising his role from the original film), who’s come to blackmail Aaron with pictures of his father in compromising homosexual positions.

The twist (if one can call it that) here is the primarily African-American cast, who step into essentially the same exact script as the 2007 picture, with screenwriter Dean Craig returning to refresh his original work (also the basis for a 2009 Bollywood comedy titled “Daddy Cool”). While Oz worked with a wry cast and his own moderately refined comedic skills, the new “Funeral” has Chris Rock reteaming with his “Nurse Betty” director, Neil LaBute. If it sounds like an uncomfortable artistic match, that’s because it is. 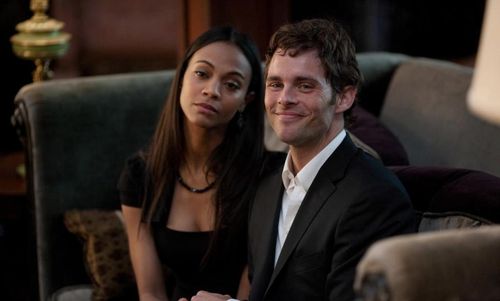 While madcap in spurts, the original “Funeral” appeared to have its tone in check, wound carefully by Oz for maximum guffaws and squeals. LaBute’s remake never snaps out of sleep mode, lumbering through familiar scenarios with its tires slashed. Granted, most coming to picture won’t even realize it’s a remake, but the sapped feel of the piece can easily be detected. Not known for his slapstick sorcery, LaBute was a poor choice for the director’s chair, lamely tracing the earlier picture with a zombie-like sense of exhilaration. LaBute’s not a comedian and a farce like “Funeral” needs a director able to pinball characters around the frame while positioning the plot into a place of delectable frenzy.

Under LaBute’s watch, the cast barely work themselves into a lather conveying such coffin-tipping madness. While the film’s been blessed with an R-rating, there’s little bawdy behavior to enjoy, outside of some mild cursing and some male nudity from Marsden, here taking over the wandering acid-trip role from beloved character actor Alan Tudyk. With Lawrence, Rock, and Morgan in leading roles, the promise for something saltier is never kept, and the trio look downright confused at times reaching blindly for jokes that just aren’t there. This leads to random punchlines and sloppy ADR improvisation, which always ruins the merriment.

“Death at a Funeral” has a few scattered laughs, but not nearly the same quantity and quality of the previous picture, which is rather startling considering how identical the two films are at times. It’s not necessarily a lazy reworking, just strangely lethargic. More tedious than ticklish.