Tina Fey and Steve Carell are two extremely formidable comedians, and thank heavens someone, somewhere had the good sense to pair them up for a feature film. While wobbly at times, “Date Night” is a perfectly pleasant, often uproarious action comedy that makes good use of their gifts and their surprising chemistry as an exhausted married couple. Even with Shawn Levy directing, “Date Night” is a consistent delight.

Trying to keep their marriage alive, accountant Phil (Steve Carell) and realtor Claire (Tina Fey) embark on weekly date nights, which have slowly lost their romantic urgency. To spice things up, the couple decides to sneak away to an exclusive New York City restaurant, using another couple’s reservation as their ticket in. Unfortunately, the night takes a turn for the worst when Phil and Claire are mistaken for a pair of criminal troublemakers by corrupt cops (Common and Jimmi Simpson), forced to run for their lives and retrieve an incriminating flash drive they know little about. With the help of friends (Mark Wahlberg), cops (Taraji P. Henson), and the couple who never showed up for their reservation (James Franco and Mila Kunis), Phil and Claire find their marital connection refreshed as they face danger from all sides. 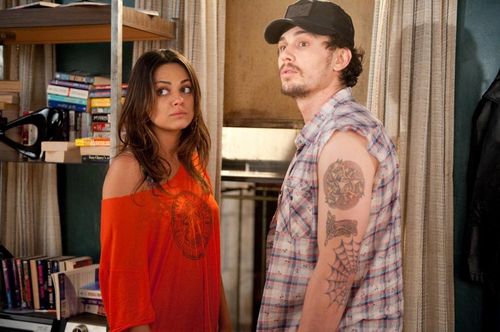 As the director of “Just Married,” “The Pink Panther,” and “Night at the Museum,” Shawn Levy doesn’t strike me as the obvious choice to steer a tricky comedy with some iffy violent and sexual overtones, nor does he immediately pop into view as a proper guide for the domestic side of the screenplay. Levy’s a difficult director to have faith in, but his work here is his most confident and trusting to date, allowing ample time for the leads to stomp in their special way, giving the feature something I’d never suspect from this filmmaker: a comedic identity.

While broad and determinedly noisy at times, “Date Night” is rightfully placed into the able hands of the cast for maximum results. The actors cause a more enchanting commotion than Levy can kick start with his action set-pieces, which find the couple banging around NYC, dodging bullets and smashing windows. There’s also a mid-movie car chase that features Phil and Claire driving a red-hot sports car and a taxicab (hooked together due to an auto accident) down the crowded city streets, allowing Fey and Carell the thrill of stunt work in a movie that largely demands their quick verbal timing. Retaining unexpected snap, the action beats tend to steal face time away from the actors while also showing off stiff direction by Levy, who doesn’t have the training necessary to finely tune the desperate race back to the comfort of suburban New Jersey. 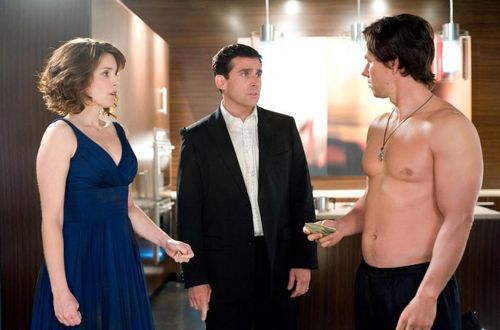 Back on the solid ground of comedic interplay, “Date Night” accomplishes much more with a steady stream of jokes and poignant relationship contemplation, with the couple fearful of a buddy zone developing in their once passionate marriage. In the hands of Carell and Fey, the one-liners fly lightning fast, building a rolling routine of situations centered on the couple’s cluelessness in times of jeopardy, or a superb running gag that has the pair constantly seeking out the assistance of shirtless black ops hero Holbrooke (Wahlberg), thrilling Claire while Phil slumps in emasculated shame. Also stealing a single scene are Franco and Kunis, playing the pair of nitwit criminals named Taste and Whippet, trading increasingly silly threats with our heroes as the whole flash drive business is sorted out. I’ll never think of Raymond Burr the same way again.

“Date Night” is nimble and, aside from a few bits of labored conversation, builds a relatable core relationship between Phil and Claire, which gives Carell and Fey a chance to connect as actors while they fool around and improv up a storm. It’s a funny movie and might snatch a few knowing nods from married couples with young children; at the very least, it’s a consistently engaging, warmly silly adventure. Levy isn’t known for pulling this type of material off, but with Carell and Fey strutting around armed and dangerous with laughs, he’s found a foolproof equation that makes him look competent.

I want to give this a shot, I really do, and I know better than to let previews guide me, but every time I see Carrell in the TV spots yelling "IT'S A KILLSHOT!!", "IT'S A KILLSHOT!!!!" I just can't imagine sitting through 90+ minutes of people yelling whenever they can't creatively find a way to make a scene funny. That, and hearing adult white people bungle urban slang stopped being amusing five years ago.