Imagine “The Matrix,” with all of its eye-popping violence, sensuality, and salty language giving the material its very identity, as intended by the filmmakers. Now picture “The Matrix” stripped of its coarseness, boiled down to a family-friendly adventure without bite and, for the most part, creative logic. In Utah, a war against sin has been waged for the last decade, pitting Hollywood legal firepower against a hungry Mormon movie nation, clamoring for blockbusters without balls.

In the late 1990s, Ray Lines imagined a future for his Mormon community where great films could be viewed without all the filth that infests the best adult-oriented material around. Customers keeping up with a LDS church ban on all R-rated features were left without an option to keep cinematically informed, leaving Lines a golden opportunity to edit the offending material out of these pictures, selling the new cuts under the brand name “Cleanflicks.” Competitors arrived, Hollywood sued, and demand exploded, leaving Lines at the forefront of a Mormon home entertainment revolution.

“Cleanflix,” directed by Andrew James and Joshua Ligairi, is a lively documentary that chronicles the brains behind the edited movie phenomenon, singling Lines and entrepreneur Daniel Thompson out as the two men who sum up the religious drive to snip the F.U. out of fun.

Lines is the brash businessman, confident about his product and its place in Mormon society. Thompson is the meek storeowner, deceptively low on personality, but oddly aggressive when it comes to dominating the edited movie market. During the 2000s, both Lines and Thompson enjoyed great success with Cleanflicks, serving an enthusiastic clientele with thousands of neutered movies (the doc provides before and after clips from the likes of “The Big Lebowski” and “The Weather Man”) available to the masses through online rental and across several retail locations. For a spell in Utah, life was good. It was consistently PG-13. However, it was only a matter of time before Hollywood would feel the need to intervene.

The beauty of “Cleanflix” is how it provides such a rich understanding of why the Mormon populace would demand such sanitation to their cinema, already available through profitable airline and television edits of top feature films. There’s a market there ripe for the taking, yet Hollywood has turned their backs on Utah, refusing to indulge the Mormons and their fear of the R-rating. Studio suits turning down easy money? Amazing, but there are issues of control raised that illuminate both sides of the discussion.

Copyright laws and assorted acts of absurd bravado eventually brought the Director’s Guild of America into the fight, which soon snuffed out Cleanflicks for good, despite legal loopholes Thompson attempted to exploit for profit and his own desire for media omnipresence. The business of backroom editing was reduced to few anxious souls who dared to continue the practice, or passed over to emerging technology that didn’t require editing at all (imagine the womanly wonderland of Kate Winslet all sprawled out in a CG t-shirt on the couch in “Titanic”).

The story doesn’t end with the legal hammer falling on Cleanflicks. Things grow far more sinister for Daniel Thompson, who positions himself as a loving man of religious opportunity, but holds a few frightening secrets of his own. Thompson’s story drives the last act of the film, which dials down important legal volleying to Jerry Springer the tale up to salacious levels of sexual misconduct. It’s a severe left turn into delicious irony that derails the story, but doesn’t dilute the fact that “Cleanflix” is a sharply produced, surprisingly even-handed story of editorial demand mutating into a Wild West mentality. 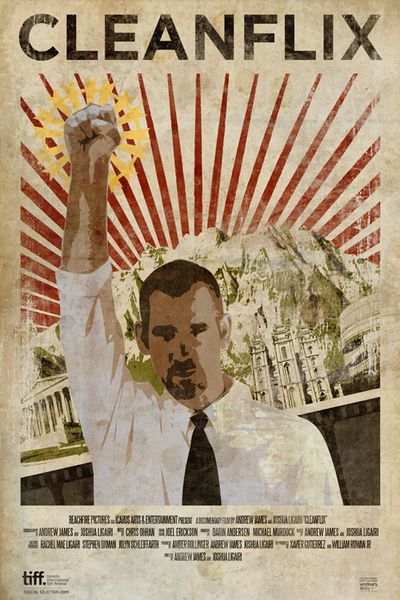