Bringing the hit 1981 fantasy “Clash of the Titans” safely back to the big screen requires a divine touch that can successfully vault past the beloved special effects display of the original film. Of course, what was once handcrafted and painstakingly mounted has been replaced with computer wizardry and polish, making the update a rowdy video game of heroes and villains, only lacking true character. It’s a gorgeous remake from a technical perspective and highlights a handful of magnificent widescreen ideas, but as much as it hustles to be an eye-popping extravaganza (nudged along by a last-minute 3-D conversion to squeeze a few more bucks out of patrons), the new “Clash” is detached and frustratingly cold to the touch.

Hades (Ralph Fiennes) has grown weary of his place in the underworld, pestering his brother Zeus (Liam Neeson) with demands for revenge on the humans who once worshipped them, but now challenge their faith. To summon fear, Hades offers the mortals a short period of time to plan the sacrifice of the princess Andromeda (Alexa Davalos, “Defiance”), or else the Kraken, a colossal beast born from the depths of the sea, will destroy the city of Argos. Into this conflict comes Perseus (Sam Worthington, “Avatar”), the demigod son of Zeus who’s only recently come into the knowledge of his lineage. Angry with the gods, Perseus heads into battle against dark forces, backed by a squad of Argos soldiers (including Mads Mikkelsen, Nicholas Hoult, and Liam Cunningham) and Io (Gemma Arterton, “Quantum of Solace”), a cursed priestess who finds glory in Perseus that needs guidance.

The 1981 picture is fondly remembered for two primary reasons: Laurence Olivier as Zeus and the stop-motion special effects from maestro Ray Harryhausen, in what would be his last feature-length endeavor. A charming picture with oodles of eye candy, “Clash” is nonetheless a talky, staccato adventure; a dawdling remnant of 1960’s spectacle staring down the golden era of Spielberg and Lucas. It’s a wonderful feature, but it’s always been clear that a second pass might benefit from a more elevated heart rate. 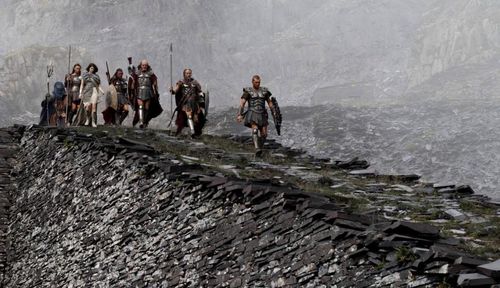 The 2010 incarnation of “Clash” comes armed with crisp energy, as seen in the film’s extraordinary budget and willingness to fiddle around with the original storyline. Director Louis Leterrier (“The Incredible Hulk”) clearly has an affinity for the previous picture, but remains determined to press his own fingerprint into the spongy material, serving up a smorgasbord of gods and monsters, assisted by a diverse cast to help achieve a classic tone of mythmaking and adventuring.

The new “Clash” is a determined blockbuster using state-of-the-art CGI over Harryhausen’s specialized handiwork, which allows the director to do essentially anything he wants with Perseus and the gang. This leaves a film of unhinged action beats in which our heroes battle with colossal scorpions, trade wounds with mutant Calibos (Jason Flemyng), and hunt for the head of Medusa (the film’s least convincing computer effect). Gorgeously costumed and designed all around (the makeup work is outstanding), “Clash” is a feast for the eyes, raising hell on a grand scale befitting a tale of Zeus’s wrath. While Leterrier clings to shameful shaky-cam to make the combat spark to life, the overall bigness of “Clash” is felt in an immensely pleasing manner. At the very least, “Clash” comprehends the challenge of remaking an already colorful picture.

Teeming with all manner of fireworks, there’s little rumbling humanity here to help the audience invest in Perseus’s journey. Handing the lead role to wet blanket Worthington keeps the film from achieving true thespian vigor, with Neeson and Fiennes doing their best to inject a sense of menace and regality into the picture, only to find Worthington asleep at the wheel. Not that Harry Hamlin wasn’t anything more than a pouty male model as Perseus back in 1981, but there was a particular screen presence there that Worthington doesn’t appear to possess. The actor has the proper physicality that’s catnip to big-budget producers, but he’s better seen than heard.  Helping matters is the supporting cast, with dutiful gruff work from Mikkelsen and a good show of ethereal exposition-fu from Arterton. 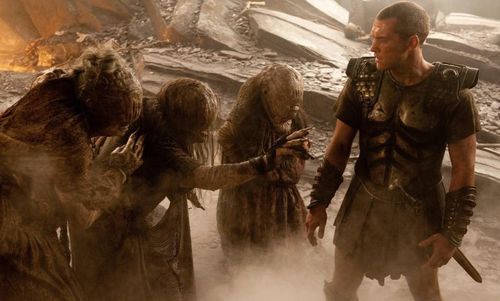 Fans of “Clash” will be comforted by the return of Pegasus (now a black stallion), antics with Zeus’s sword, a confrontation with the Stygian Witches, and all the growly Kraken business. Jettisoned is the critical chess match of Olympus, where the bickering council of the gods toyed with clay figures and debated the effectiveness of humanity. There’s also a throwaway joke made at mechanical owl Bubo’s expense that wasn’t necessary -- a poke of nostalgia mixed with disgust just to nab a cheap laugh.

“Clash” 2010 mixes matters up just adequately enough to freshen the experience, but mere splashes of creativity fail to improve on the 1981 feature. This “Clash of the Titans” is positioned to wow global audiences with amazing visuals, but there’s little heart or substance behind the wall of astonishment. Appreciable only for its extravagance, perhaps its best to leave Zeus, Perseus, and Medusa back in the ‘80s, where this odd struggle between humans and gods was treated with a more effortless tone of enchantment. 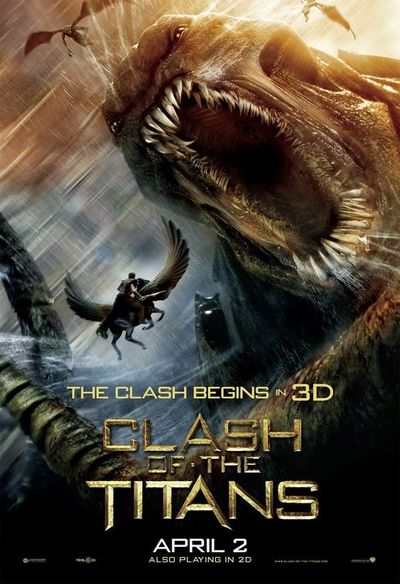 With Worthington as the focal point, I'd be surprised if this film were anything but a failure. He has zero charisma, zero talent, and worst of all, apparently zero creative ambition. He invests about as much time in developing a character as most people invest in an everyday bowel movement, and the result is no less fragrant.