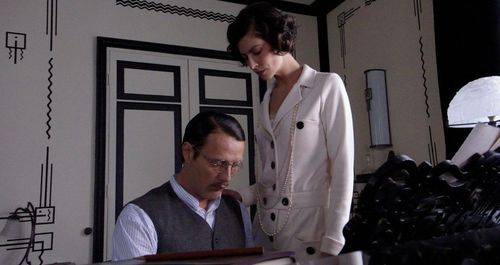 “Coco Chanel & Igor Stravinsky” commences with a moment of sensorial confusion. The picture greets the viewer with a series of kaleidoscopic patterns scored to a roll of orchestral waves, building what appears to be something of an overture to ease the film into a reflective mood, not necessarily a dramatic one. Sensual and lush, the feature has an unusual combination of heavy sexuality and creative obstruction, shaping something that’s not exactly reality, but far from fiction.

In 1913, Igor Stravinsky (Mads Mikkelsen) developed “The Rite of Spring,” an ornately designed piece of music commissioned for the ballet. Facing a riotous initial response that sent him into a creative tailspin, Igor found reassurance in the form of clothing empress Coco Chanel (Anna Mouglalis), who offered the composer and his family a place inside her estate so that work on bringing back “The Rite of Spring” could commence. Taking the offer, much to the concern of his ailing wife (Yelena Morozova), Igor begins to feel out his music once again. However, matters quickly dissolve into lust when the icy Coco offers herself to Igor, engaging in a torrid affair that reawakens his passion, but could destroy his marriage.

“Coco Chanel & Igor Stravinsky” is a tale told with frosted stares and fearsome posture, a hushed body language that makes the pull of lust shared between the title characters all the more secretive and destructive. Director Jan Kounen creates a hostility that’s difficult to isolate, existing in the brief flashes of what passes for emotion with these iconic artists, gradually erecting what should be recognized as an extended act of unforgivable betrayal, seizing the persuasive carnality of the pairing. It’s an unsettling feeling, but a dynamic directorial achievement, which asks viewers to remain invested in two individuals who are essentially charmless and free of standard morality. It’s their genius and confidence that keeps us glued to the screen, that indescribable tractor beam of artistic toil that often doubles as an aphrodisiac. 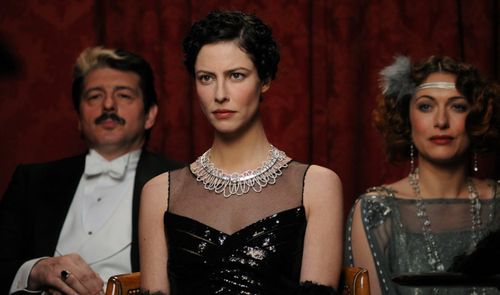 Kounen isn’t shy depicting Coco and Igor’s dance of the pants, viewed through graphic sex scenes that underline the more animalistic urge of the paring over traditional romantic needs. These are brave performances from the two leads, who express a universe of thought with very little movement. It’s a complex psychological map of submission and colliding cultures, but Mikkelsen and Morozova are up for the challenge, finding shades to these famous faces that are off-putting (Chanel is depicted as a women left for dead by her wartime past, stripped of humanity long ago) and achingly human in equal measure. It’s a film of flamboyant cinematography and slow burn ambiance, but these actors fire discreetly and directly, creating a disturbing stillness to their interaction.

Dipping into history, the picture sets aside some time to observe Coco as she develops her legendary perfume and Igor pounds out a sharpened new musical dedication, while the duo finds their relationship refreshing their creative demands. The historical detours are less enchanting and somewhat cringingly overstated, but they remain an important piece of a deceptively simplistic picture, rooting the rumor of an affair between Coco Chanel and Igor Stravinsky into proper context, making for an even more convincing motion picture. 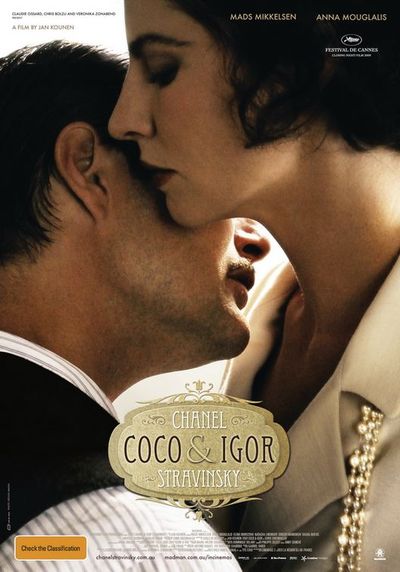