Sent to live with her estranged father Steve (Greg Kinnear) for the summer, Ronnie (Miley Cyrus) isn’t pleased with the situation, while kid brother Jonah (Bobby Coleman) is overjoyed. Resentful about the way her father destroyed their family, Ronnie has lost interest in life and her extraordinary musical gifts, taking to the beach in a sullen fog. When Ronnie meets Will (Liam Hemsworth), her whole life changes, allowing the handsome young man into her ailing heart, embarking on a summer romance that withstands bouts of hateful gossip and disapproving parents. While all seems well, the summer slowly draws to a close, leaving the lovers at a crossroads, with further pressure emerging from a tragic event that will change Ronnie forever.

Yes, tragedy. To Nicholas Sparks, tragedy is mother’s milk, helping the writer to arrange identical stories varied only by degrees of hysteria. With “The Notebook,” “Nights in Rodanthe,” “Message in a Bottle,” “A Walk to Remember,” and the recent “Dear John,” Sparks has hit pay dirt, and it’s hard to blame the guy for essentially recycling the same elements of romance and doomsday to make millions from readers all over the world. However, his cinematic appeal hits a bumpy road with “Last Song,” which, oddly enough, represents the first time Sparks has ever attempted to script one of his own novels (eventually sharing a credit with Jeff Van Wie). It’s a shame “Last Song” is such a repetitive stiff, as it boasts two pleasing lead performances from Cyrus and Hemsworth, who share benevolent chemistry as the virginal couple. Inching away from her sunny day personality as Queen Montana, Cyrus attempts some darker colors as Ronnie that go beyond heavy eye makeup and combat boots (the rebellious teen uniform). It’s not a complete 180-degree-turn from her established persona, but the prickly, nostril-bejeweled effort helps to ingest the bland story and the creative panic emanating from television director Julie Anne Robinson, who always has a music montage loaded and holstered just in case she can’t figure her way out of a scene. Cyrus still has much to learn about restraint, but she’s an interesting foundation to “Last Song,” matched well by Hemsworth and his unthreatening everyguy appeal.

In fact, “Last Song” is positively held together by the duo (Kinnear has a few gentle moments as daddy deserter), as the rest of the cast leaves much to be desired. Young Bobby Coleman is particularly aggressive as the bright-eyed, camera-aware little brother, offering migraines with every last attempt to express earnestness, practically popping when the gang helps to hatch a swarm of baby loggerhead turtles. Nick Lashaway is equally as unappealing, here as a possibly mentally challenged thug named Marcus who keeps invading Ronnie’s personal space. The character appears to have some elevated meaning to the story, but Robinson only includes baffling flashes of the actor, which is more than enough.

As previously mentioned, matters sour for Ronnie and her dreamy summer, dragging the third act down into a desperate bid for tears. It’s manipulative, but that’s Sparks, and frankly, the man has made more noteworthy plays for sniffles during his career. I found the last-minute dash for emotional devastation cloying and unearned, asking too much of the actors and severing the snappy pace of the story.

As a PG, Disney-produced soap opera, “The Last Song” retains an affable presence when keeping close to the natural glow of the stars. Anything more labored than stolen kisses, paternal resentment, and gorgeous beachside cinematography grinds the whole endeavor to a disappointing halt. 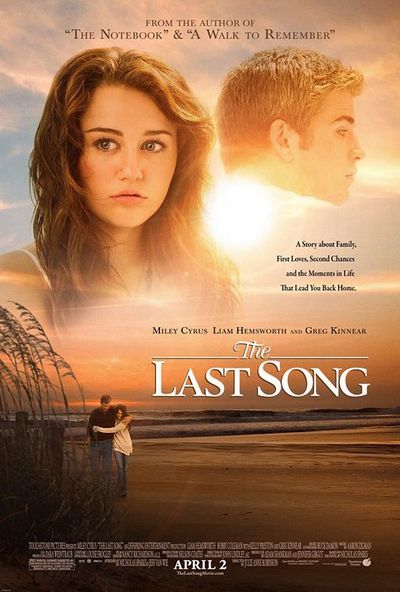