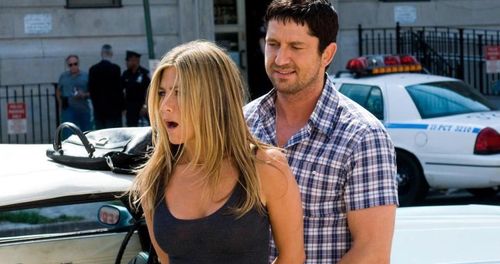 Within the first five minutes of “The Bounty Hunter,” two different male characters find themselves on the receiving end of a swift jab to the testicles. It’s an achy, sickening feeling sure to be shared by most moviegoers who spend their hard-earned cash on this comatose, exceedingly unfunny caper. More remarkable for the glistening sex appeal of the leading actors than anything found in the excruciatingly labored script, “Bounty Hunter” is an empty calorie, brain dead waste of time.

A journalist with a hot tip involving a mysterious suicide, Nicole (Jennifer Aniston) is racing to find a witness who can unlock the whole case. Unfortunately, to meet her snitch, Nicole skips out on a court appearance for a frivolous arrest. Now with a warrant out for her arrest, a local bail bondsmen (Jeff Garlin) calls in Milo (Gerard Butler), a bounty hunter up to his ears in gambling debts, to catch Nicole, knowing full well the two were once married and are now bitterly divorced. Catching up to Nicole in Atlantic City, Milo prepares his prize for return, only to find a legion of gangsters and troublemakers (including Peter Greene, Jason Sudeikis, and Cathy Moriarty) standing in the way. Now on the run, the couple finds time to reassess their failed marriage, with hope for a reconciliation looming on the distant horizon. “Bounty Hunter” is something approximating an action comedy, but handing those ingredients to director Andy Tennant is like asking McDonalds to whip up a glorious steak dinner. Tennant is a company man with little patience for the art of cinematic personality, coming to the film after a run of hits including “Hitch,” “Fool’s Gold,” and “Sweet Home Alabama.” He’s room temperature skim milk when the genre demands a shot of Jagermeister, and Tennant’s meager touch with adventure and chemistry constantly derails whatever minimal amount of interest “Bounty Hunter” manages to uncover during its unbearably overlong 105 minute running time.

Perhaps the greatest foes to the picture are Aniston and Butler, who share sibling chemistry, not the scorching sexy type that weakens knees and tightens pants. Nicole and Milo spend a majority of their screen time bickering as any divorced couple would in the situation, but the banal script by Sarah Thorp fails to layer in any reason to give a damn about this foolish, clueless pair. Their banter is simplistic, lacking wit and vitality, and the acting appears more drowsy than enchantingly energized by the whole on-the-run elements of the tale. Butler and Aniston resemble a pair of polished bronzed statues (kudos to cinematographer Oliver Bokelberg), but the talent has little to work with while trapped in trunks and chained to doors and headboards. Instead they clomp around spewing insipid dialogue, stagger through anemic action beats, and face a frosted sense of personal interaction the feature needs to work in order to make the second half of the film (where the couple learns there’s still fire down below for each other) make any sort of sense. 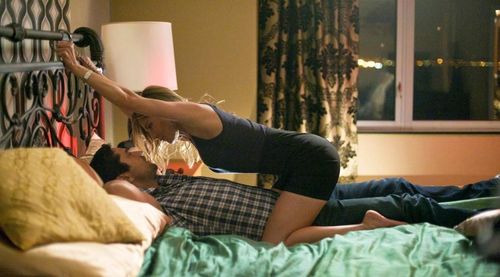 “Bounty Hunter” wants viewers to root for Nicole and Milo, to cheer for their resuscitated feelings while peeling around New Jersey dodging bullets, golf balls, and tasers; unfortunately, the alleged love story never stands fully erect. The script doesn’t help matters by conjuring a complex-for-the-genre cat’s cradle of bad guys and evil schemes, which get in the way of the googly eyes. Tennant actually abandons the plot by the end of the movie, closing with a blink-and-you’ll-miss-it showdown intended to pay off the interminable build-up. I can’t blame the director for showing little interest in his own picture.

Pretty people have pretty problems in “The Bounty Hunter,” but as a viable source for thrills and swoon? There’s no pulse here to effectively heat up the big screen. 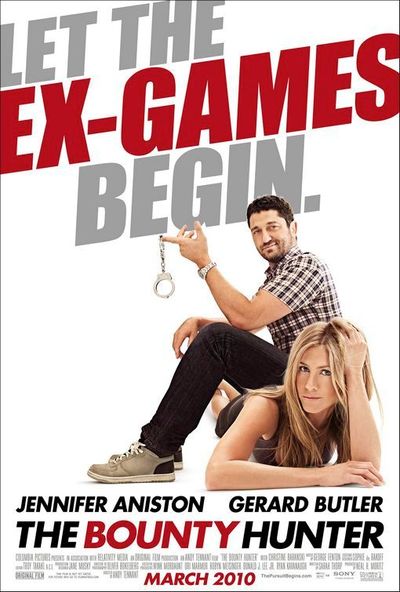