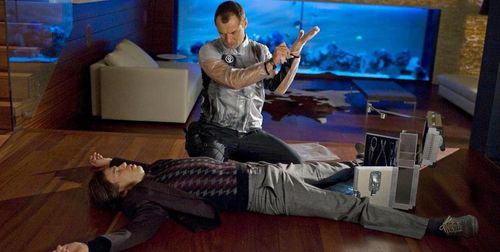 “Repo Men” is a gonzo, head-smashing, organ-tearing delight…at least 50% of the time. The rest of the film meanders about, searching to assume some form of significance. It’s a solid ground-rule double from director Miguel Sapochnik, but the picture is not nearly as deranged as it should’ve been, trying urgently to stay friendly when a nice shiny set of Verhoeven-sharp fangs would’ve done the premise more justice.

In the future, organ failure has a cure. For an exorbitant price, The Union will replace faulty innards with metal contraptions few can plausibly afford. After a 90-day grace period, the Repo Men are called in to retrieve the body parts, using a variety of tasers and operating equipment to finish the job. Buddies since they were kids, Repo Men Remy (Jude Law) and Jake (Forest Whitaker) are some of the best retrievers in the corporation; however, after a horrible accident, Remy requires a brand new heart, thus putting him on the other side of the repossession equation. Failing to pay his bills, Remy is soon on the run, teaming up with Beth (Alice Braga), a tattered lounge singer he’s harbored feelings for. With an army of Repo Men on the prowl, Remy and Alice battle for their lives, with Jake placed in charge of retrieving his old pal’s artificial heart. 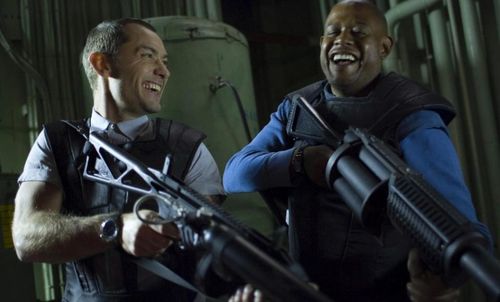 If the plot sounds vaguely familiar, it is. 2008’s cult musical “Repo! The Genetic Opera” covered essentially the same ground, only selling the macabre with more lungpower and jazz hands. This leaves “Repo Men” at a disadvantage, coming in second in a ludicrous race to tell the same sci-fi story.

Forgoing the singing and dancing route, “Repo Men” aims to be a little more intellectual than its competition, taking on a sinister tone of satire as the screenplay imagines a futureworld where every available space is plastered with advertisements, and good health can be purchased for an outrageous fee. The consumerism-gone-haywire angle of the story is played strongly at first, introduced with a nice firm delivery from Sapochnik, who embraces the chaos of the repo market, establishing Remy and Jake as soulless working stiffs reclaiming their rightful property, despite teary protests from the delinquent owners. The opening act of the film is a barnstormer of blood and brutality, mixed with a nice wiggle of comic maliciousness, underscoring the cavalier attitude of The Union men as they undertake the daily grind of surgical repossession. 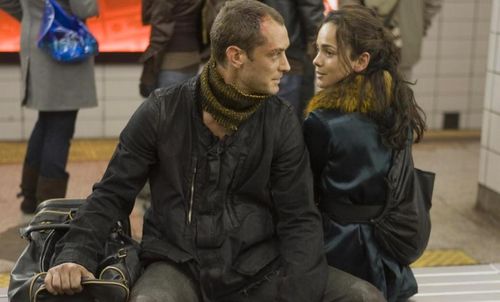 Once the first act is complete and Remy is positioned in a fugitive-style role, “Repo Men” sits down and takes a nap. Assuming it needs a peaceful sense of emotional gravity to accentuate the concern for the characters, Sapochnik kills the momentum of the picture to meditate on Remy’s turn of fate, dragging the character of Beth in to provide a useless sexual outlet (played blandly by an ill-equipped Braga). The tonal shift is jarring and suggests more than a few scenes of character development were snipped out before “Repo Men” hit theaters. Criminally, the female distraction disorients the story, which doesn’t quite understand which mood to play: carnival of blood or poetic reflection. The tempest of tones continually undermines the brazen attitude Sapochnik is trying to build up.

Matters do overheat superbly for the Grand Guignol finale, where Remy slices and hacks his way through a throng of security officers as he marches into Union headquarters. While dampened some by Zack Snyderesque trendy visual flavoring, the unbridled throat-slicing and gut-puncturing is a delight, with “Repo Men” aligning its chakras as a vicious free-for-all, topped only by a scene shortly after, which sexually amplifies Remy and Beth’s tense metal organ inventory process. It’s a salacious Cronenbergian touch that makes “Repo Men” exceptional. It’s a damn shame there isn’t more bloodstained madness spread throughout the picture like it. 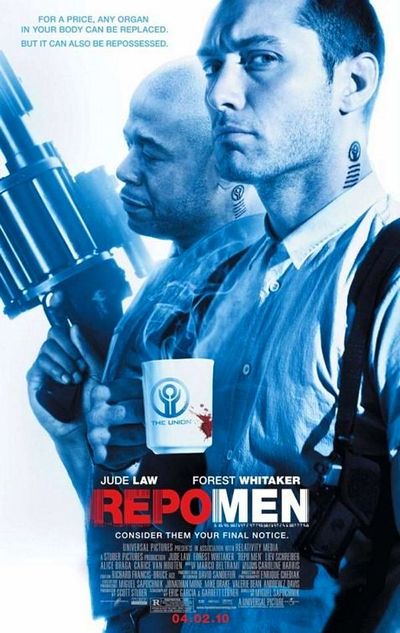