To describe “Our Family Wedding” as an offshoot of “Guess Who’s Coming to Dinner” is undoubtedly an insult to the 1967 Stanley Kramer film. Perhaps my memory isn’t as sharp as it once was, but I fail to recall the original picture containing a scene in which a goat, jacked up on a spilled bottle of Viagra, endeavors to dry-hump an understandably confused leading character. Again, perhaps that’s my mind playing tricks on me.

Returning to Los Angeles to spread word of their hasty wedding plans to their families, Lucia Ramirez (America Ferrera) and Marcus Boyd (Lance Gross) are faced with an impossible task; breaking the news to their respective Mexican-American and African-American broods, the couple is met with hostility when it’s clear fathers Miguel (Carlos Mencia) and Brad (Forest Whitaker) are unable to get along. Looking to create a suitable ceremony in just a handful of weeks, the diverse cultures clash over the festivities, leaving Lucia and Marcus in a position of doubt as their wedding day approaches and the two families can barely agree on any of the details.

Scattershot doesn’t even begin to describe the direction of “Our Family Wedding.” Helmer Rick Famuyiwa (who hasn’t made a picture since 2002’s “Brown Sugar”) angles to make something very silly and sincere, ending up trapped midway: an uncomfortable middle ground where nothing in the picture registers in the heart or bangs loudly on the funny bone. Instead, it’s a rambling, episodic dramedy using a screenwriting template to feel out its giggles and characterization, insisting that racial tension is the key to unlocking a riotous good time at the movies.

Perhaps there’s some promise in the plot, which delights in the culture clash discomfort shared between the two families; however, when one imagines the potential of a broadly staged wedding farce, the names Forest Whitaker and Carlos Mencia don’t exactly spring to mind. The actors are dead weights that anchor Famuyiwa’s intentions further, murdering the joy of the picture with their lethargic line-readings and predictable improvisational harassment. The leading men look the part, but neither actor has the ability to make the script sing, while the supporting cast flops around screeching, encouraging the aggressive stereotyping, making the feature a ghastly brew of “Sabado Gigante” and “House of Payne.”

Of course, it’s not all hornball goats, wedding cake fights, clueless Caucasians, and Mariachi sing-alongs, “Our Family Wedding” wants to capture the heart too. I’m not exactly sure why Famuyiwa believes anyone will care about these harebrained characters, but the second half of the film heads in a strained dramatic direction, where all the main players are assigned their own bit of worry to overcome for the finale. Had the film elected a more farcical tone (as the opening act suggests), the results might’ve been more agreeably numbing. Erecting a bridge of sympathy to impersonal sitcom troubles only reinforces the shallowness of the direction and the limitations of the cast.

“Our Family Wedding” slaps on the dancing shoes for the grand finale, but there’s little bliss to share. Intensely unfunny and persistently insipid, the picture is a chore to sit through, especially with a filmmaker who’s clearly working outside of his gifts.

Well, at least the goat is happy. 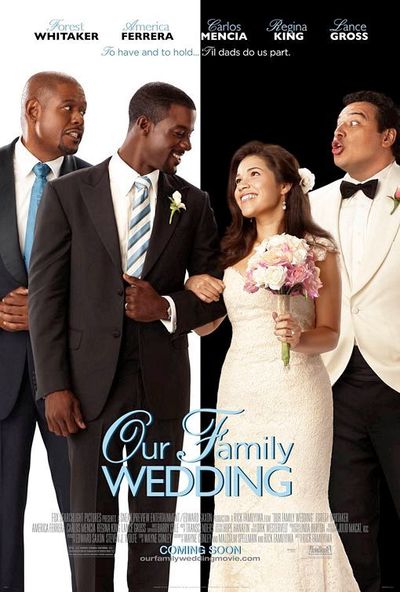