Film Review - How to Train Your Dragon

This is a wonderful motion picture. Perhaps Dreamworks, in their frantic need to push the movie to every demographic, has lost sight of the film itself, but abysmal marketing efforts aside, “How to Train Your Dragon” is a rousing success; a soaring, endearing adventure feature that plays smart and fierce. Now stop giving your money to Tim Burton’s wheezy imagination and see something with genuine magic. An actual, effective, multi-dimensional wonderland.

On the island of Berk, a community of Vikings spend their days training for war against waves of aggressive dragons. For pipsqueak Hiccup (voiced by Jay Baruchel), life as the son of stern leader Stoick (Gerard Butler) demands that he join the dragon-killing squad, but he just doesn’t have the heart for it. Discovering a fallen dragon that’s missing part of its tail, Hiccup befriends the rare creature, using his artisan skills to help the sleek black beast off the ground. Nicknaming the dragon “Toothless,” Hiccup discovers he has a way with the so-called enemy, taking to the air with his new friend. Unfortunately, his gift reveals a secret nest of dragons to Stoick, who leads the people of Berk into war, leaving Hiccup and Toothless racing to prevent a needless catastrophe.

Loosely based on author Cressida Cowell’s 2003 book, “How to Train Your Dragon” reworks the core elements of the story to fit a majestic feature-film playing field, with colorful, bushy Viking characters and a sky filled with fire-breathing dragons. That’s not to suggest the producers have dumbed down the material; on the contrary, the film is filled with images that maintain the promise of threat, turns of fate that actually have a bodily effect on the characters, and eye-popping skylines of combat. Directors Dean DeBlois and Chris Sanders (“Lilo & Stitch”) serve up a substantial escapade that should excite audiences of all ages.

“How to Train” is persuasively sharp in the action department, but it possesses a generous heart as well. The core of the film spotlights the relationship between Toothless and Hiccup, and how they develop a lasting bond that teaches the value of curiosity. Admittedly, the picture is a formulaic hero’s journey typical of any animated feature, but the emotive voice work from Baruchel and the playful rendering of Toothless help to lift the crushing weight of familiarity, bypassing various kiss of death clichés that slip into view. Butler also stuns with his work as Stoick, at last allowed to brandish his natural Scottish accent to bellow mightily as the king of Berk. It’s a magnificent vocal expression of leadership and frankly, some of the best acting Butler has ever done.

There’s a smattering of young comedians (Jonah Hill, Kristin Wiig, and Christopher Mintz-Plasse) here to thwack the film’s funny bone, which feels like an unnecessary distraction considering how fluidly the film pulls off the central relationships. America Ferrera nabs a satisfying supporting turn as Hiccup’s warrior queen crush, and Craig Ferguson stretches his acting muscles a touch playing a wisecracking Scotsman who’s in charge of training the kids of Berk in all matters of dragon warfare.

The voice work elevates the material, but the animation grabs hold of the senses. Working with steady elements of fire and flight, “How to Train” looks stupendous at times, putting its 3-D sprucing to exceptional use as the camera follows Toothless and Hiccup into the air, soaring erratically amongst the clouds (the chills are encouraged by John Powell’s majestic score). Character and dragon designs winningly straddle the line between exaggeration and storybook, highlighting marvelous facial detail on Hiccup as he runs through the gamut of emotions while astride his winged pal.

“How to Train Your Dragon” doesn’t reinvent the wheel, but the movie achieves a sustained note of integrity and charm that’s all too rare in the family film gene. Absent the Pixar syrup and, for the most part, the Dreamworks slapstick, the picture breaks through as a distinctive triumph that respects the potential of CG-animation, encouraging genuine awe and plenty of smiles as it fills the screen with high-flying splendor. 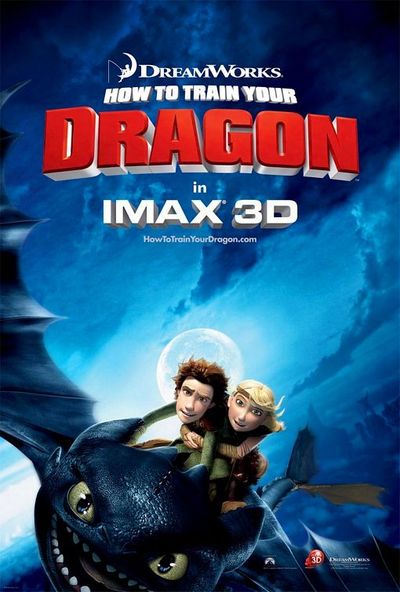