There’s a 15-minute period at the commencement of “Hot Tub Time Machine” where matters feel rather dire: faced with a loopy plot, a competitive cast of comedians, and well, the hot tub, the film proceeds to roll out a series of gross-out jokes and an endless stream of profanity. The effort is to establish a potent tone of vulgarity to prepare the audience for the runaway-boulder-sprint of comedy ahead, sloshing around the chum to see who decides to stick around. For those who elect to ride out the booze-soaked, forked-tongued storm, they receive a startlingly alert, good-natured, borderline poignant slapstick comedy that makes the most out of a one-joke premise.

Life is simply awful for estranged pals Adam (John Cusack), Lou (Rob Corddry), and Nick (Craig Robinson), who’ve left behind their mid-‘80s heyday for a miserable adulthood, filled with cheating women, humiliating jobs, and suicide attempts. Looking to rekindle their youth, the gang, with Adam’s social reject nephew Jacob (Clark Duke) in tow, head to their favorite ski resort for a weekend of partying. With the help of a can of illegal Russian energy soda, the men turn their hot tub into a time machine, whisking them back to early 1986 when the world was their oyster. Panicked, the friends are given vague direction by a mysterious repairman (Chevy Chase) to carefully relive the events of the day, helping them return to 2010. Trouble is, considering how their lives turned out, some of the boys may never want to go back. Opening with an animal fecal gag, a spray of vomit, and the miracle of male nudity, “Hot Tub Time Machine” doesn’t exactly offer the glad hand in its first act. Perhaps it’s a ruse, maybe it’s laziness, but the stagnant air of boorish behavior sets an important tone that director Steve Pink (“Accepted”) spends the rest of the picture contorting into unexpected greatness.

Once the boys settle into their misery (and apathy), the film storms into the 1986 world, opening the film up to easy, but effective jokes about hairstyles, clothing, and music, executed with a generous nature, nothing snide or too easy. It seems our heroes resemble their younger selves to the outside world, allowing them safe passage into a nightmare of recollection, as bullies and spurned girlfriends long since forgotten have returned in all their day-glo glory, and the guys are forced to experience the same humiliations that made them the men they are today all over again.

Pink reaches for the obvious gags that play with time travel elements (e.g. gambling with future knowledge, avoiding miserable relationships, and embracing the sexual vitality of youth), but there’s something of a story cooking while the script drinks in the absurdity of the era, instead of making outright fun of everything. While the foursome sprint around the hotel frantically finding their old footsteps, the screenplay pauses a few moments to process the nature of friendship, with loudmouthed Lou concerned that his pals will ditch him in 1986, just like they’ve done in 2010. “Hot Tub Time Machine” isn’t exactly a comfy-sweater Lawrence Kasdan film, but I was plenty stunned to find the picture reach out for something other than female breasts, trying, albeit through bong smoke, to communicate the need for close friendships, which always helps to scare away the death march of adulthood. 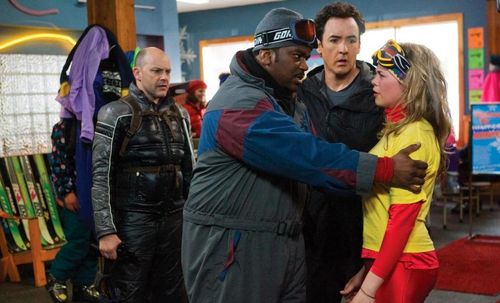 Don’t worry, “Hot Tub Time Machine” is hardly a dirge for the wasted years of youth. In fact, the film’s plenty hilarious, due to four lead performances that emphatically detail the sweaty horror of the 1980s. Corddry rampages through the film as the chemically dependent Lou, a man drowning in Motley Crue memories, who takes to 1986 like a fish to water, outside of the Zabakaish ski patrol goons who spoil the mood with their bullying. Corddry dances around with his pants on fire, dialing the tomfoolery all the way up with a stream of swears and imbibing, allowing the rest of the cast (including wonderful turns from Robinson and Duke, who finally play against type) to sneak in with softer, considered expressions of shock. Cusack does Cusack, though he’s the largest recipient of Pink’s ‘80s film nostalgia. Not bad for a guy who was there when it all went down the first time around.

The picture hauls in a few first-rate running gags (including one with Crispin Glover as a one-armed bellboy), and toys merrily with “Back to the Future” type temporal rifts, most concerning sexual impropriety. The worst-case scenario for a premise like this is lethargy and stupidity. “Hot Tub Time Machine” readily indulges in both, but the way it changes course and sails into something affable and hilarious is refreshing, taking a one-joke idea and making it stick for 90 stunningly entertaining minutes. 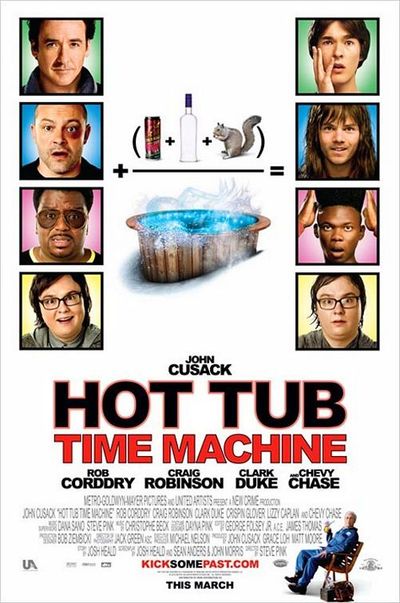