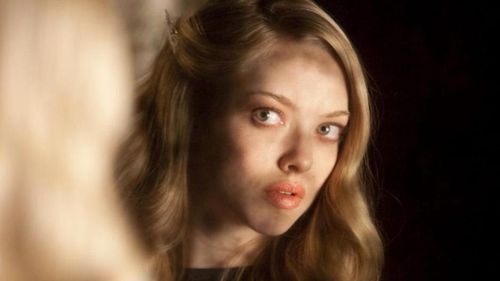 “Chloe” opens with a clinical description of the female orgasm, and then spends the following 100 minutes displaying increasingly more frenzied examples of it. Director Atom Egoyan returns to his favorite thematic playground with this sexual thriller, working the levers and polishing the knobs on a juicily plotted, tantalizing chiller that cooks in an appealingly heated state of submission to the bitter end.

A gynecologist, Catherine (Julianne Moore) has finally grown weary of husband David‘s (Liam Neeson) flirtatious ways with women, fearing her partner has turned to infidelity to soothe his marital woe. In a desperate bid to test her mate, Catherine hires Chloe (Amanda Seyfried), a ravishing prostitute with an amazing power over men. Ordering her to seduce David, Catherine finds Chloe’s increasingly lurid reports of their sexual activity disturbing, yet undeniably alluring. Finding herself wrapped up in Chloe’s sexual precision, Catherine is pulled into the escort’s orbit, which encourages Chloe to step past established boundaries, leading the curious wife to panic.

With his work on “Exotica” and “Where the Truth Lies,” Egoyan has danced on the sticky floors of sexual fixation before, yet “Chloe” is his most accessible stab at the genre (in fact, the picture is a remake of a 2003 French film). Imbued with sinister “Fatal Attraction” spices, the picture slithers predictably, but beguilingly, benefiting from a filmmaker interested in overcoming the routine with a torrent of sensuality, gifted to a pair of female leads more than capable of selling the bejesus out of leg-rubbing, hunched-over desire. 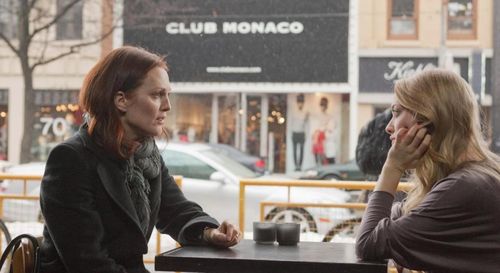 Egoyan and screenwriter Erin Cressida Wilson aren’t shy with Chloe’s sexual antics, revealing the escort’s daytime adventures with David in a careful, humid detail befitting the storytelling skills of a professional lover. The goal is to envelop the viewer in the salacious effort, blurring Chloe’s subtle move from bosomy wet dream to an obsessive, wild-eyed nightmare. The effect sometimes requires the cast to bend the reality of reaction with heavy lunges of melodrama, but the volcanic core of Chloe’s efforts linger, envisioned wonderfully in Seyfried’s bombshell performance, which Egoyan divides up into flashes of pillowy lips, silky hair, killer lingerie, and mounting psychosis.

Moore has a uniquely challenging role here, as Catherine is caught between disgust with her once beloved husband and a sickening attraction to Chloe, which devours her sense of good judgment. Moore’s terrific depicting the smashed dimensions of obsession that crawl into the good doctor’s heart, developing a weighty impression of longing and anxiety as her curiosity turns into fantasy; a reluctantly open-armed greeting Chloe comes to assume is an invitation to share deeper feelings, along with some playtime between 1000-thread-count hotel sheets.

The payoff for “Chloe” leaves much to be desired, refusing a less satisfying route of complete mental breakdown to play with voyeuristic Hitchcockian theatrics, pulling Catherine’s teen son (Max Thieriot, cast more for his appearance in underwear than his acting abilities) into the path of destruction. Intended to give some sort of lift to an audience that’s endured disconcerting actions and domestic disturbance, the ending doesn’t ripple with the sort of switchblade assurance Egoyan is known for. “Chloe” is a fulfilling erotic odyssey up to the point of dramatic release, leaving viewers with an abrupt kiss on the cheek right at the moment of a trembling cinematic climax.