Part of me wanted to appreciate “Toe to Toe” for the way it aches to portray teenage life as more than just sassmouth and cartoon cliques. The rest of me wanted to take can of gas and a book of matches to the negative, preventing the film from ever being exhibited again. A demented, amateurish after school special, “Toe to Toe” is only useful as a means to observe a first-rate actress in the making. The rest is pure rubbish, delivered with all the subtlety of an air horn.

Tosha (Sonequa Martin) is an African-American girl struggling to survive her urban existence by attending a prep school, playing lacrosse, and dreaming of a college career at Princeton. Into her world comes Jesse (Louisa Krause), a Caucasian girl of privilege and hip-hop sensibility who uses sexuality as a way to cover her severe parental abandonment issues. The two develop a bond through sports, but the friendship is short-lived when both girls vie for the attention of Rashid (Silvestre Rasuk), a budding D.J. who adores the newfound attention. When a hate crime sends shock waves of accusations throughout the school, Jesse is left with nothing, turning to the comfort of strangers to heal her emotional wounds.

It’s not impossible to appreciate what writer/director Emily Abt wanted from “Toe to Toe.” Obviously sympathetic to the nightmare of adolescence, Abt conjures a Benetton ad of intolerance, imagining a melting pot high school community of diverse racial backgrounds at war with one another. The concept of “Toe to Toe” is commendable, but Abt is no filmmaker. Instead of something legitimately interested in psychological trauma, the director slaps together a moaning melodrama where authentic human response to racism, sexual invasion, and domestic betrayal is pushed aside to make room for intolerable overacting and dangerously simplistic screenwriting. Abt mistakes hysteria for honest discussion, allowing “Toe to Toe” to implode as soon as it begins.

The relationship between Tosha and Jesse isn’t a plausible union of like-minded souls, and Abt barely allows room for the friendship to take hold before they’re barking at each other. In a film of jarring moves, this is the worst offense, with the opening section of the picture racing to manufacture a friendship that should come organically. 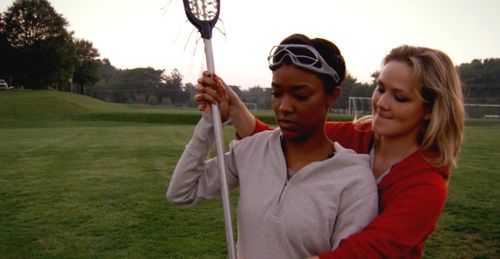 All of the characters are appropriately burdened, but Abt makes it impossible to invest in the strife, playing matters with an unreasonably cartoon hand. Jesse is the princess inside a bitter palace, dealing with an absentee mother (Ally Walker), while desperate to be accepted by other racial groups to escape the prison of her life. Tosha is a bullied perfectionist growing up in the projects, angry with her unmotivated family, using the prep school as a way to buffer herself from reality. And Rashid? He’s a Muslim led around by his hard-on, taking the stage name “D.J. SandNig” without irony. There’s not a single reason to care about any of these people.

If there’s anything to savor in “Toe to Toe,” it would be Martin’s performance, which recalls some of the better interior work from Angela Bassett. She’s useful here and shows some restraint, especially next to Krause, who’s nothing but screams and plastic attitude as the damaged goods. I can’t be too hard on Krause since Abt has the young actress in various stages of frenzied sexual availability, including a howler of a scene where Jesse dry humps a tree to capture Rashid’s interest. Actually, Krause deserves an Oscar for enduring Abt’s humiliations, which intend to deal directly with the dangers of freewheeling sexual practices, but come off unsavory in a rancid Larry Clark fashion. If you’re a filmmaker with something to say, the lure of salacious nonsense is the last place to find enlightenment.